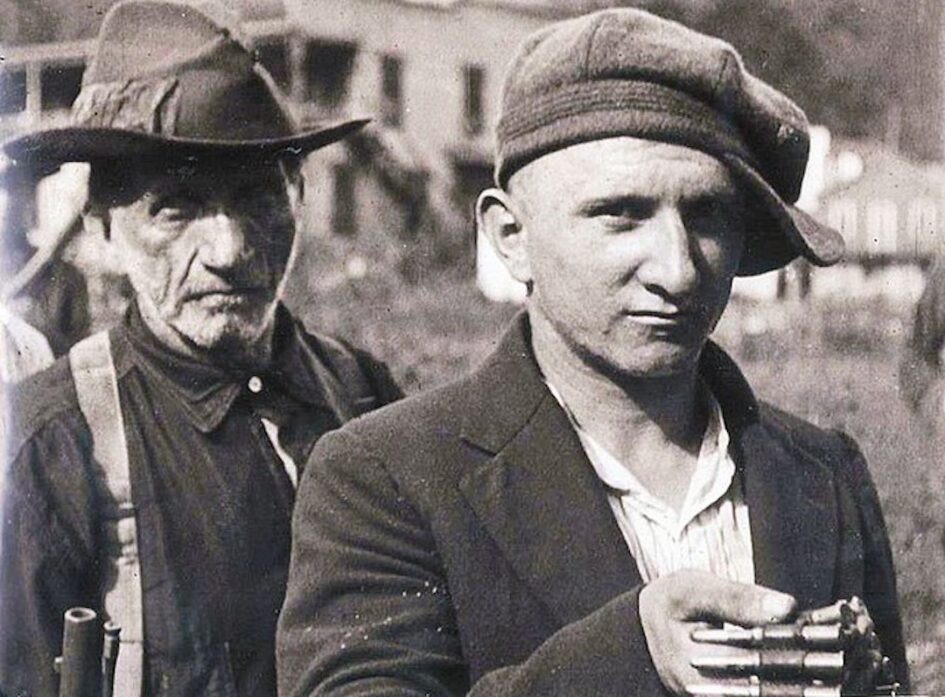 This story originally appeared in Jacobin on June 23, 2021, and is shared with permission from Jacobin.

In August 1921, up to twenty thousand miners with the United Mine Workers of America (UMWA) amassed in Charleston, West Virginia, many armed with hunting rifles. They aimed to march southwest, to Mingo County, to free striking miners and their families, whom the coal bosses, in collusion with the state, had imprisoned and were attempting to starve out.

But between the two groups of miners stood Blair Mountain, rising nearly two thousand feet above sea level. Atop the mountain, the local sheriff had dug in his own army of hundreds of deputies, armed with submachine guns and bombs, which were deployable via commandeered aircraft. The two sides battled for five days before federal troops put down the miners’ revolt. (“AIR FLEET ORDERED TO W. VA BATTLEFIELD / AVIATORS WILL DROP BOMBS ON MARCHERS” read the headline in the Washington Times.) It was the largest armed conflict since the Civil War and, to this day, the largest labor uprising in US history.

At the time, miners in West Virginia lived in an “industrial police state,” according to the historian Charles B. Keeney. They not only resided in company housing in company towns, where they purchased exorbitantly priced goods from company stores, but they and their families suffered under the scrutiny of mine guards, who represented the combined force of the coal industry and local government. Miners were subject to evictions, beatings, and even murder at the behest of the coal industry (“King Coal,” in the local parlance).

In opposition to this violent rule, miners sought to organize themselves into unions. Founded in Ohio in 1890, the United Mine Workers of America spread across West Virginia in the 1910s and early ’20s. Police state–like conditions, combined with many miners’ battle experience in World War I, triggered one of the most violent fronts of the Coal Wars — a series of conflicts that saw workers and owners battle for control of mines from Colorado to West Virginia. In 1921, miners in Mingo County were attempting to unionize when their leaders were imprisoned and their families starved to break the strike. When West Virginia’s governor refused to hear the appeal of local UMWA leaders and members, the Battle of Blair Mountain was all but set.

Keeney’s great-grandfather, Frank, was president of the UMWA in West Virginia and one of the leaders of the miners during the Battle of Blair Mountain. This legacy drew Keeney into a subsequent battle for Blair Mountain, beginning in 2011, to protect it as a site of historic significance. Once again, big business and the state joined to threaten the interests of working people in the form of their collective history, with King Coal poised to destroy the battlefield through mountaintop removal mining and the construction of an airfield for the West Virginia National Guard. Against these powers that be, Keeney and other activists formed a surprising alliance of environmental and labor organizations, which dogged the coal companies, state government, and federal agencies on the ground and in the courts for nine years — until Blair Mountain was finally listed on the National Register of Historic Places.

Jacobin contributor Arvind Dilawar recently spoke to Keeney about the 1921 labor uprising and 2011 preservation effort, both of which are detailed in his book, The Road to Blair Mountain: Saving a Mine Wars Battlefield from King Coal.

An Interview with Charles B. Keeney

Arvind Dilawar: In The Road to Blair Mountain, you distinguish “redneck” as a pejorative from “red neck” as a term of empowerment. How were the miners at the Battle of Blair Mountain “red necks?”

Charles B. Keeney: I differentiate between the two to distinguish activism versus the contemporary stereotype. The use of the two-word “red neck” is connected to the history of the red bandana in labor and activist movements. Some workers during the 1877 Railroad Strike, which began in West Virginia, wore red bandanas as symbols of their union solidarity. Coal miners in the state later picked up the tradition and were commonly referred to by company mine guards as red necks.

In 1921, when someone said red neck, they didn’t imagine the quips of Jeff Foxworthy but someone who stood for unions and workers’ rights. In the American popular consciousness, the one-word version of the term became synonymous with a derogatory stereotype usually referring to rural whites.

My book and activism endeavor to reclaim the term as intended by the white, black, and immigrant miners who stormed Blair Mountain a century ago.

Arvind Dilawar: The miners involved at the Battle of Blair Mountain were interracial. To what extent were they anti-racist in their aims?

Charles B. Keeney: The fact that the “Red Neck Army” of 1921 was integrated a generation before the US military is significant. Additionally, marching miners did force restaurant owners and company facilities to desegregate in the area they controlled — but I wouldn’t necessarily categorize them as anti-racist in the contemporary sense, as they did not call for a reevaluation of race relations in society. They simply were able to temporarily set aside racial differences and prejudices for an immediate common goal.

The unity of these miners, however, does offer a glimpse of what is possible when groups such as immigrants, blacks, and rural whites work together.

Arvind Dilawar: In your book, you describe the old mine guard system evolving into the current “mind guard system.” What was the former, and how did the latter spring from it?

Charles B. Keeney: The mine guard system refers to the industrial police state that existed in West Virginia from the 1880s to the New Deal. More than twice the percentage of coal miners in West Virginia lived in company towns than in any other state in America. Mine guards served as company police, strikebreakers, and spies in order to prevent unionization and establish coal-company control over the region.

During the 1930s, mine guards were abolished in Central Appalachia. Coal companies responded to this change of fortune by dominating local media and school curricula and by producing their own history textbooks. Such control over information enabled the industry to perpetuate a myth of coal as a great positive influence on the state.

With the decline of the United Mine Workers in the late twentieth century, the industry created the Friends of Coal, and bombarded the region with pro-coal propaganda. State politicians, bought and paid for by the industry, passed legislation to prevent the teaching of climate change in secondary schools and created the “Coal in the Classroom” program to paint the industry in a romanticized light.

I call it the “mind guard system.” This, combined with the economic hold of coal over the region, helps explain the worldview and voting patterns of many people who live in Central Appalachia.

Arvind Dilawar: The battle to preserve Blair Mountain faced opposition not only from the coal industry but the military-industrial complex. How did these interests intersect?

The industry approached the National Guard with a plan to blast sections of the battlefield and use the blasted rock material to build crisscrossing runways for a drop zone and anti-terrorist training facility. They sold this concept to the state’s adjutant general and then-governor Joe Manchin. The state, in conjunction with the coal industry, then successfully petitioned to delist the battlefield from the National Register, apparently hoping that local patriotic sentiment and the promise of mining jobs would steer public opinion in their favor.

However, Friends of Blair Mountain (FOBM), the nonprofit organization I led, successfully stopped the operation and was able to get the battlefield back on the National Register. In my book, I detail how we accomplished this, as well as the surveillance, threats of violence, and other pressures placed upon myself and the members of our organization during this fight.

Arvind Dilawar: Success in preserving Blair Mountain involved aligning environmentalists and miners. Was there one tactic or strategy that you feel was most helpful in unifying those typically conflicting parties?

Charles B. Keeney: A decade ago, environmental groups and the United Mine Workers did not get along, to put it mildly. To be labeled an environmentalist in coal country was akin to being called a witch in colonial Salem.

The United Mine Workers were far more comfortable aligning themselves with a historic preservation group. Environmentalist groups, such as the Sierra Club, remained allies because an alliance with FOBM gave them credibility. FOBM managed to be the bridge between the two factions.

I believe our efforts in building a coalition are significant because real progress on climate change cannot be made without the support of industrial workers and the unions that represent them. For example, in 2017, when Trump green-lit the Dakota Access Pipeline, environmental groups balked while Richard Trumka, president of the AFL-CIO, praised the decision. As long as environmentalists and industrial workers remain divided, efforts to build an economy on renewable energy will be stifled, because many workers will not vote for politicians who they believe emphasize the environment over employment.

Arvind Dilawar: Are there any ways that you see the Battle of Blair Mountain resonating in current labor struggles, such as the ongoing strike by UMWA at Warrior Met Coal in Alabama?

Charles B. Keeney: As I’ve stated many times before, Blair Mountain isn’t who we were, it’s who we are. The wealth gap in the United States is the largest since the Battle of Blair Mountain. Unions are as weak as they were a century ago. In a variety of ways, the 2020s are shaping up to be quite similar to the 1920s.

Moreover, in the developing world, workers are experiencing conditions that created the armed insurrection of 1921. In similar fashion to coal mines a century ago, forced child labor is common in African mines that extract rare earth elements and gemstones. Company towns exist today in South America and East Africa that are every bit as oppressive as the coal camps of industrial West Virginia. Chinese corporations and fossil-fuel giants such as Exxon employ private company armies across the southern hemisphere. Union leaders in these countries are assassinated. In Peru, for example, over a dozen labor activists were murdered in 2018 alone.

In short, our failure to learn the lessons of Blair Mountain has led to a world that may see similar conflicts emerge in the future.