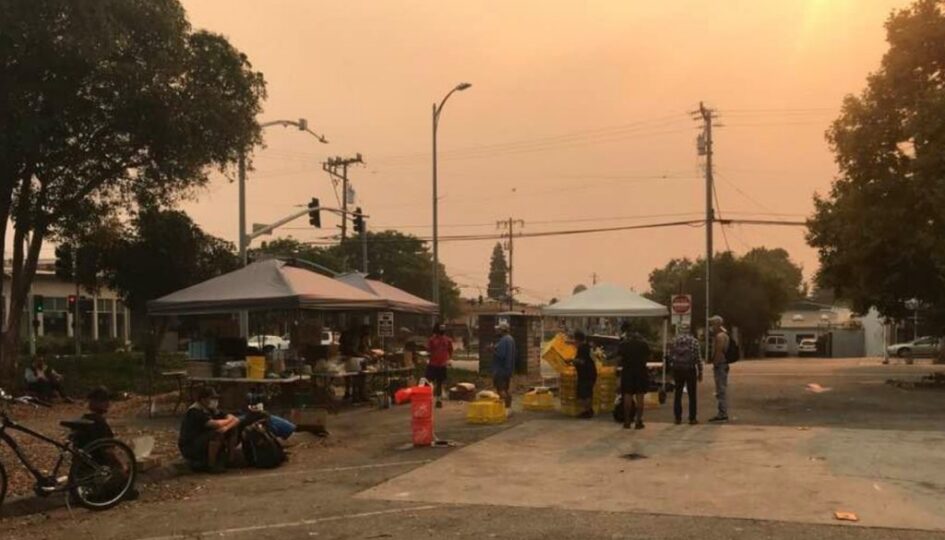 Santa Cruz, California – The streets went silent that misty March 14, 2020 morning.  I passed only two other vehicles on my way to prepare the meal at the Veteran’s Hall. News that the indoor food programs had been ordered shuttered meant our unhoused friends would have to go without food if we didn’t step up and fill the void. Eight of us Food Not Bombs volunteers gathered at LuLu Carpenters that cold Saturday to discuss our plans. I think all of us were in a state of shock at the mystery that lay ahead.

A medical social worker who had just been trained in the COVID-19 safety protocols at Good Samaritans Hospital detailed what she had learned the day before. We moved our meal to the Town Clock from the Post Office so our line of guests would not be standing near the dozen or so people camping along the Water Street sidewalk.

We were honored to fill in for the weekday meals at St Francis and Louden Nelson senior lunch during the two week lockdown to flatten the curve. When they reopened we would return to our weekend schedule.

Two weeks turned to a month, then two months, then two years and on December 10, 2022, our all volunteer group will have shared hot meals, drinking water and survival gear every afternoon for 1,000 days. 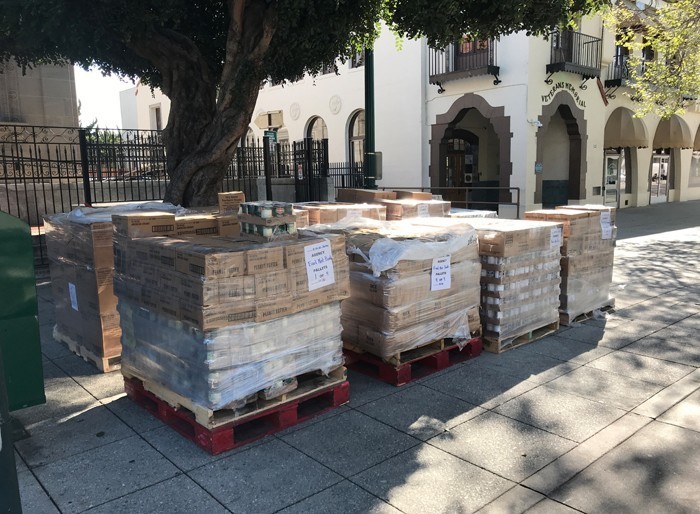 The City of Santa Cruz responded to the crisis by erecting Triage Cages for the homeless in downtown parking lots while locking down everyone else. The Santa Cruz Homeless Union and Food Not Bombs responded by setting up a Covid -19 Relief Center at the Town Clock and placed 180 people in hotels for several nights. The police evicted us for the first of eight times claiming our hotel voucher distribution was an illegal gathering.

Second Harvest stepped up and started their weekly deliveries of pallet loads of dry goods. They delivered at least 20 pallets of rice, beans and other provisions during the first week of the crisis. We filled the empty offices at India Joze at 418 Front Street, a shipping container, and warehouse at Barrios Unidos. We provided groceries to the Live Oak School District and helped them acquire their own account with Second Harvest.

Our kitchen moved from the Veterans Memorial Hall to India Joze to the Little Red Church and now up to Scotts Valley. The stress of loading and unloading our van several times just to set up became too much so we bought a second shipping container and placed it at our meal next to the abandoned Taco Bell at Laurel Street and when an out of town developer threatened to seize it we moved it across Front Street to lot 27.  When another out of town property speculator announced the destruction of India Joze and the other business on Front we bought a third shipping container and cleared out our supplies at the 418. 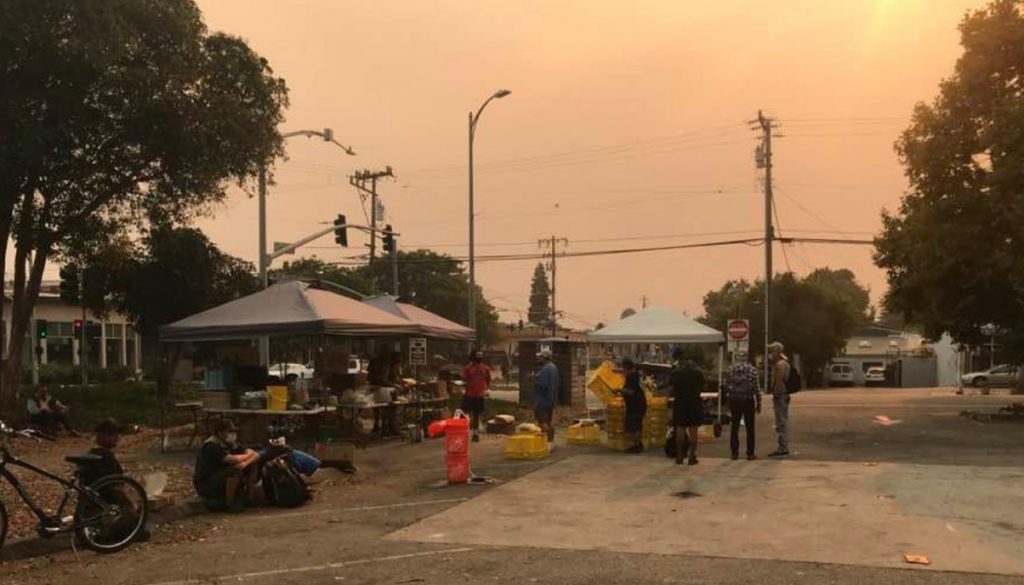 While our all-volunteer staff was scrambling to meet the needs of the ever growing number of the just evicted people we also provided food and logistical support for several Black Lives Matter marches, organized protests against the war in Ukraine and fed the strikes at the University.

The sky turned an eerie red as those fleeing the CZU Lightning Complex fire joined us at our Laurel and Front Streets meal. I remember several people coming to us desperate for a change of clothes.

When the city forced us onto the Benchlands our equipment was flooded in two feet of water so we returned to the higher ground of Garage 10 only to be forced to Laurel and Front Streets. After we won a federal law suit stopping the eviction of those camped in San Lorenzo Park and those on the higher ground moved to the Benchlands our volunteers began our weekly delivery of a pallet or more of food to that community of hundreds every week. 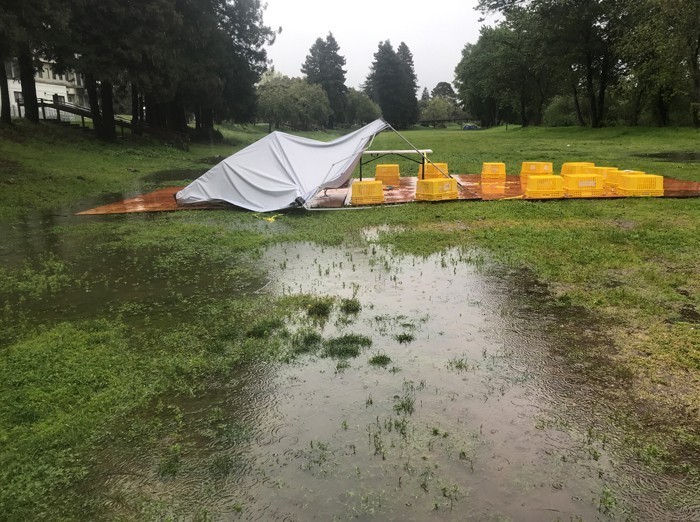 Our group had to think creatively. We first met on Zoom then in person to figure out solutions to each logistical issue and set that week’s schedule of volunteer tasks. A food recovery team picked up at farmers markets, Trader Joes, Companion and Beckmanns bakeries, and a host of other food sources. Another group shared the meal, clothing and drinking water while  often having to calm people suffering from emotional crisis. We provided the only reliable hand washing station for hundreds. Others prepared the hot meals and spent hours washing pots and hotel trays. Community members graced our program with their own hot meals and survival gear donations.

We repaired vehicular homes to keep them from the city tow trucks. We reunited family members seeking their unhoused children. We comforted the stunned newly homeless and helped them with  a pup tent,  a warm meal and a listing of mostly closed services.

Our volunteers provided the annual Thanksgiving and Christmas community meals during the two years of restrictions. We also hosted a free concert during every holiday. We also lost many friends during these 1,000 days. Rick our Bread Man and Tree the hibiscus tea lady died early in the crisis. The death toll from the elements, murders and addiction has been horrific. We held our annual longest night of the year memorial to honor those who did not make it on the cruel streets of Santa Cruz and plan to do so again at the Town Clock this December 21st. 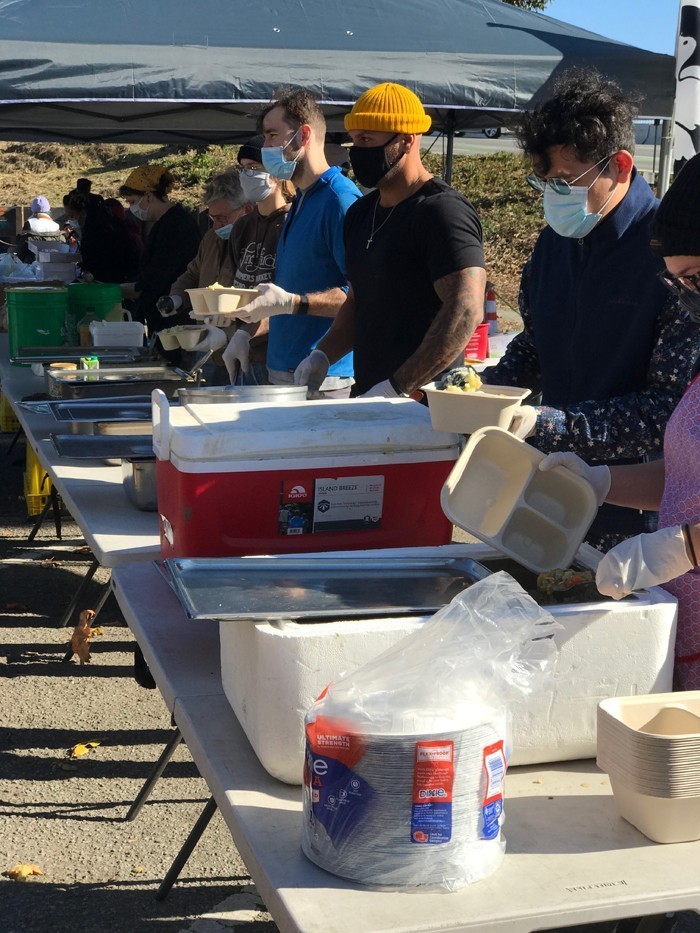 We will be celebrating our 1,000th day with live music. The 1,000 Dancing Doves is performing at the Clock Tower at noon on Saturday, December 10th and Folk Punk musician David Rovics will be playing a benefit concert at the Resource Center for Nonviolence on Friday, December 9th at 6:30 pm.

We have 1,000 days of filling the void left by the governments while those vultures were too busy aiding investment firms in their construction of luxury condominium projects to provide necessities to their residents.

We are practiced at responding to the impact of a failing economy. There is every indication that a Great Depression scale collapse could sweep the world in 2023 and we know city, county, state and federal officials are not about to help our community in this time of crisis. The politicians have wars to fund, metal and glass monstrosities to build, and off shore bank accounts to fill, so it will be up to all of us cooperating together to take care of the needs of our people.

Our compassion will be required to navigate the difficulties ahead. Food Not Bombs is hosting a community meeting on Sunday, January 15, 2023, at the Resource Center for Nonviolence to discuss the logistics of survival as the economy crashes and we face cuts in electricity, food shortages, the possible transition into a cashless digital security state and increase in homelessness and poverty.

If we all work together and think outside the box we can flourish. We invite you to join us. 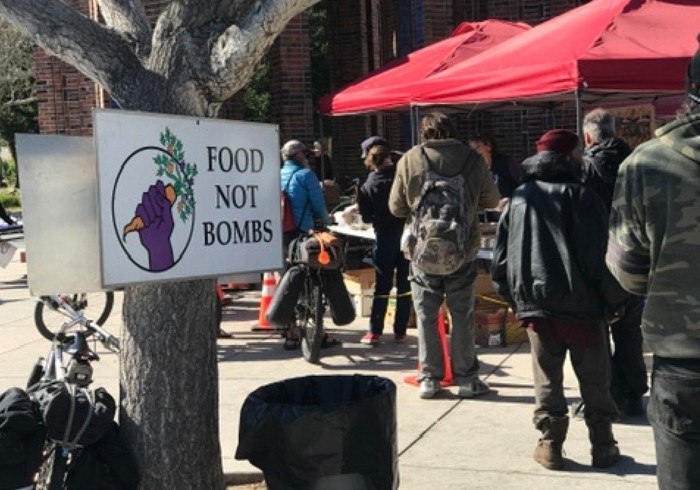 No compassion, no release in California prisons

Must we ration compassion?

More than 1,000 protesters demand justice for Amir Locke in Minneapolis

Senate GOP agenda would hike taxes on poorest 40% by average of $1,000