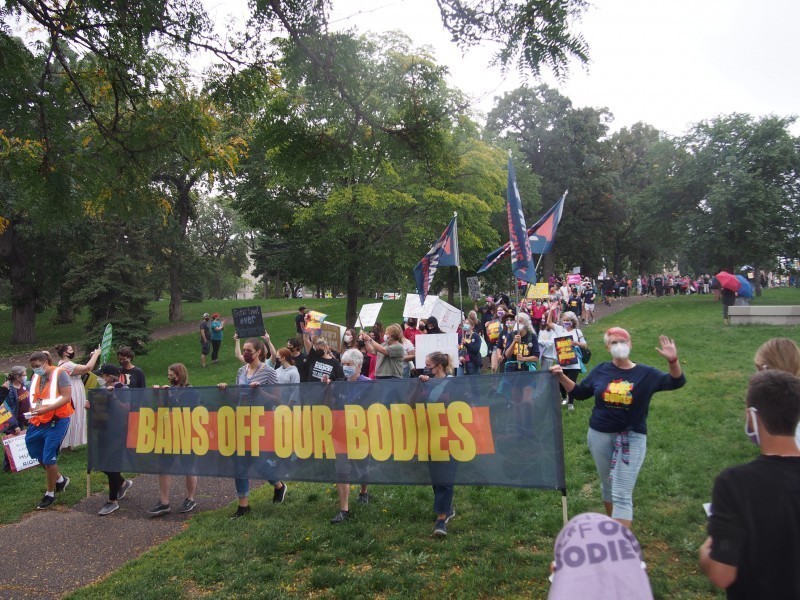 Minneapolis, MN – The Women’s March organized a rally and march as a part the National Day of Action on October 2 to protest the anti-abortion law passed in Texas in June. Up to 10,000 people of all genders gathered at the Minneapolis Sculpture Garden holding signs and banners expressing their outrage over the Texas law SB 8.

The new law effectively bans all abortions after six weeks and has no provisions for a woman for any reason to get one. It includes a terrifying provision where people can sue any woman who gets an abortion and anyone who may assist them – including doctors, friends, family members and even Uber drivers.

Throughout the rally, the speakers highlighted why it was important to be here right now. Many echoed phrases, “We will not go back to the way it was before Roe v. Wade.” “We must continue to fight back against any anti-abortion laws that will put women in danger and restrict their access to abortions.”

Signs included “My body my choice,” “We won’t go back,” “They love you until you are born,” “Vasectomies stop abortions” and “Forced birth equals violence.” Some featured a picture of deceased Supreme Court Justice Ruth Bader Ginsburg with the slogan, “We are ruthless now, act accordingly.” Men held signs, “If your penis was regulated, would you vote differently?” “He who is without ovaries shall not make laws for those who do,” and “Her body – her choice.”

When the march started, the banner of “Bans off our bodies” was proudly displayed in front. As the crowd marched over a bridge from the Sculpture Garden to Loring Park for the main rally, cars passing underneath honked in support and the people waved back. The march was so long that that it took an hour and a half to fully cross over the bridge to the park.

The marchers chanted, “When women’s rights are under attack, what do we do? Stand up fight back!” “They say no choice, we say prochoice!” “We won’t go back to the alleys in the night!” “Stop the ban!”

Speakers pointed out that there is a lot of work to be done in Minnesota, by removing abortion restrictions, needing to break down barriers, protect and expand access and funding – but that the pro-choice people outnumber those they are fighting against.

A handful of anti-choicers tried to disrupt the rally but were quickly shut down by the people around them.

A speaker representing the Planned Parenthood Action Fund told the crowd, “The attacks we are seeing on abortion are not about protecting life but instead will do harm. Our most vulnerable, low-income, rural and communities of color will be hit the hardest if abortion becomes illegal. Abortion is essential healthcare. We must protect our bodies, our rights and our rights here in Minnesota. We cannot let a bill like the one in Texas pass here.”

A member of Youth Against Sexual Violence Minnesota Chapter and who works at Planned Parenthood rallied the crowd, “We absolutely cannot let a room full of male politicians decide what happens with our bodies and our futures. Minnesota cannot become Texas. We must provide reproductive and sexual healthcare now and our generation is in the future. They may think that young people don’t care and are not paying attention but what they don’t realize is that there are thousands and thousands of young people who are not settling for the status quo. We will not stop raising our voices until reproductive healthcare is reality for all of us!”

Nature Inger, human rights advocate from Botswana stated, “It just infuriates me that we have to be here. The people who create these laws are spending time with their families, wives and daughters. Let’s face it and, in most cases, they will not have to adhere to these rules and laws.”

More speakers noted the abortion movement cannot be separated from other movements. The community will attain reproductive justice when abortion is safe, legal and accessible.