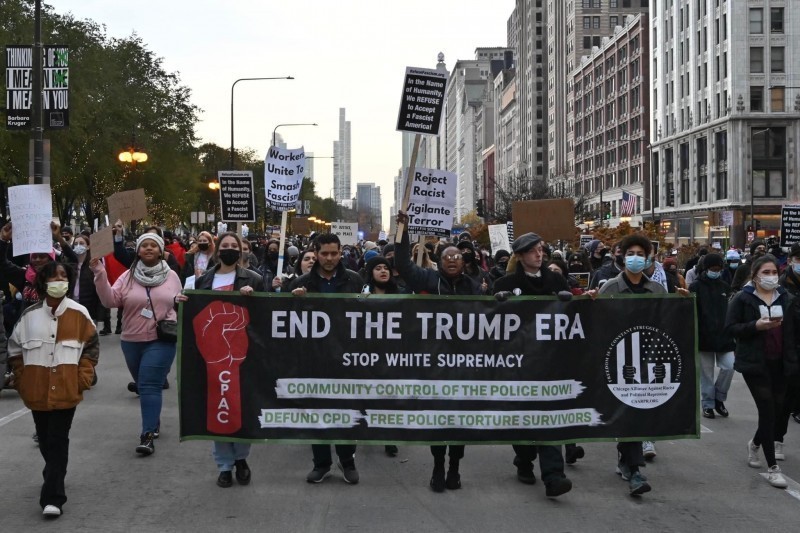 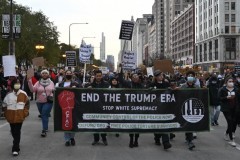 Chicago, IL – A front banner read, “Stop white supremacy” as people hit the street in Chicago’s Loop on November 20 to condemn the injustice in the court in Kenosha, Wisconsin the day before. A jury complying with the instructions by a racist judge sent the message that white racists and police can kill with impunity while African Americans and other oppressed nationalities can be killed, tortured and jailed without justification.

The Black and Latino youth leading the march were outraged and confrontational with Chicago police when they pressed in on the march at its end.

The rally was called by the Chicago Alliance Against Racist and Political Repression (CAARPR), with support from numerous organizations, including the Reverend Jesse Jackson and the Rainbow/PUSH Coalition. At the rally, Jackson echoed the call from CAARPR which demanded that the U.S. Department of Justice file federal charges against Kyle Rittenhouse for the racist vigilante killings in Kenosha.

In the Rittenhouse case, Jackson said, “A federal crime has been committed, a hate crime. The DoJ must step in. Biden said in response to the verdict, ‘The law is the law.’ I don’t believe that. We must change the law to make it a just law.”

“Nobody has the right to cross state lines with a loaded weapon, kill two people and then go home.”

Using his trademark call and response, Rev. Jackson got the crowd to join in saying, “The police who shot Jacob Blake should be in jail.”

Jackson added, “The right wing doesn’t mind [Anthony] Huber and [Joseph] Rosenbaum being killed. Just like when Schwerner, Cheney and Goodman got killed in 1964.”