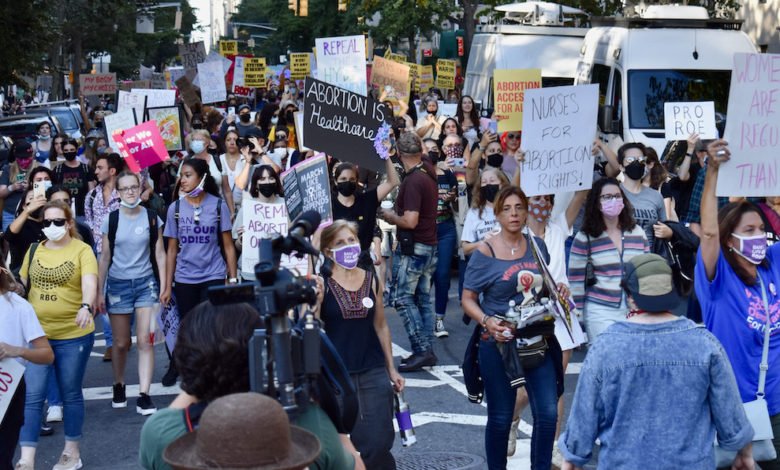 New York State saw at least 17 marches, rallies and other actions demanding abortion justice on Oct. 2. The focus was reproductive justice and the right to abortion access, in light of Senate Bill 8 passing in Texas, which would ban abortions after six weeks of pregnancy and making no exceptions for rape or incest.

The actions were endorsed and co-sponsored by Planned Parenthood chapters statewide, and over 90 other organizations, including the Party for Socialism and Liberation and the Geneva Women’s Assembly.

The largest actions took place in Albany, the state capital, in Seneca Falls, where the historic 1848 Seneca Falls Convention for women’s rights and suffrage took place, and in New York City. In Albany and Seneca Falls over a thousand people came out to demand abortion access, and in New York City where 5,000 took to the streets. Other actions included a rally at Cornell University in Ithaca, and a march co-led by BLM Saratoga and the Women’s March in Saratoga Springs.

Hundreds of ralliers came from all over New York state to Seneca Falls–from Binghamton to Buffalo–to stand up for abortion rights in one of the women’s movement’s historic hotbeds of radicalism. The crowd’s outrage was captured in handmade signs and placards reading: “End the war on women,” “I am a human not a host,” “Legal abortion now,” “We won’t go back!” PSL and the Geneva Women’s Assembly led, a fighting feminist contingent there.

In both Albany and Seneca Falls, the first woman Governor of New York, Kathy Hochul, spoke at the rallies. Despite publically committing to abortion justice, Hochul continues to incarcerate poor women of color, with the rates of incarceration of women in prison increasing 272 percent since 1980. The Mayor of Albany, Kathy Sheehan, also spoke in favor of abortion justice. Sheehan, however, has opposed local calls to ban police use of tear gas and other chemical weapons on protesters. Albany police  used tear against Black Lives Matter protesters in 2020.

Despite moderates speaking, many in the crowd were militant. In Seneca Falls, following the speeches, including remarks from Gov. Hochul, ralliers lined downtown chanting: “Hey Hey, Ho Ho, the patriarchy has got to go,” “Not the courts not the state, women must decide our fate,” “Pro-life, that’s a lie, they don’t care if people die,” and “Hey hey, ho ho, Supreme Court judges got to go.”

Rojas, with the Party for Socialism and Liberation, linked the recent attack on abortion rights to a broader class struggle. “This what we’re up against, not just a bad law, but a whole damn system,” Rojas reminded the crowd. “That system has, at its top, a clique of billionaire bigots, their politicians for hire, the courts that do their bidding, all the way up to the Supreme Court, the corporate-controlled media, a whole army of lobbyists, and on the frontlines, to keep us in line, they have the police and ICE. That’s what we’re up against! And it might sound scary, because what do we have? We have tens of millions of women, and trans, and gender non-conforming people who have a direct stake in this fight for abortion access. We are the frontline workers, the overworked, the underpaid, the immigrants, the millions in the streets for Black lives, the water protectors, the millions of young people who are fed up with capitalism, and saying, ‘We need system change, not climate change.’ We are the MANY.”

The rally then turned into a march across lower Manhattan, finally concluding in Washington Square Park.