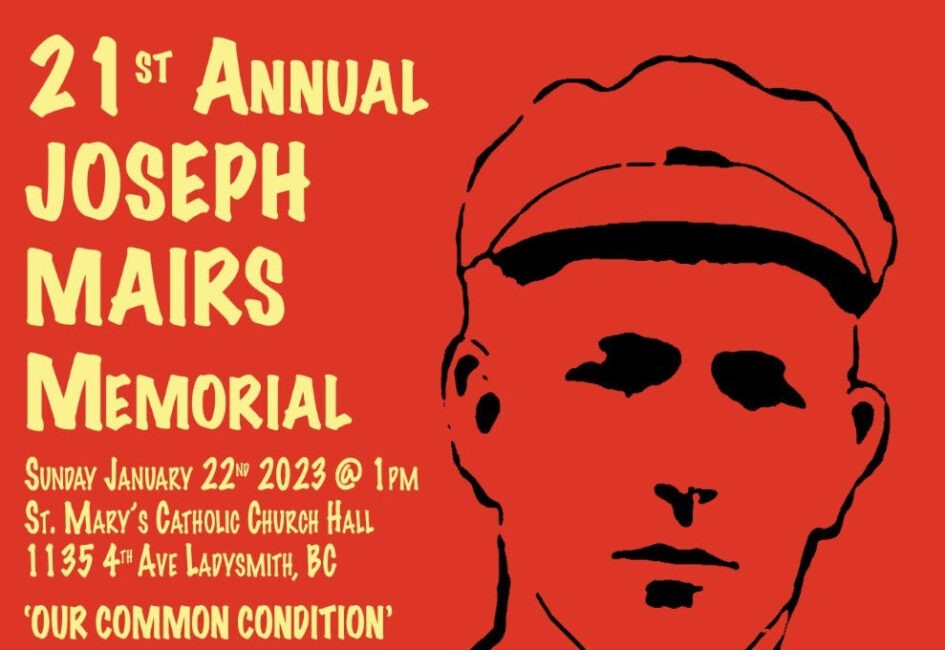 Come and join with other working people to honour Our Labour Martyr, Joseph Mairs. As always, our general theme for the day is ‘Our Common Condition.’

We are pleased to announce our keynote speaker for this year’s event is John Clarke.

John Clarke came to Canada, from the UK, in the late seventies. In 1983, he helped to form a union of unemployed workers, in London, Ontario. Seven years later, he moved to Toronto to become and organizer with the newly formed Ontario Coalition Against Poverty (OCAP), continuing in that role for 28 years. He is presently the Packer Visitor in Social Justice at York

”The leaders of the G7 told us that that the post-pandemic world would be one in which we’d ‘build back better.’ Instead, we are living in a period that is marked by war, climate disaster, a rampant cost of living crisis and deepening economic slump.

In the face of such volatile and dangerous conditions, how do our unions and communities build the kind of powerful and united movements that can prevent those in economic and political power from imposing the burden of this crisis on working class people? How do we fight to win in this harsh and unprecedented situation?”

We welcome interest from media and can provide opportunities for interviews in the lead up.

As always, we will hold a discussion after John speaks and we encourage everyone to participate. Through this event, we hope to provide inspiration for all of us to advance our work to build serious struggle for workers’ rights and conditions across this province and the world.

Again, this year we will enjoy live music by local musicians linked to the Labour Movement – Beverley McKeen and Lily Haythornthwaite. All this will be technically perfect due to the skills of our sound person Mike Gagnon.

After the indoor programme, we will form a procession behind our splendid piper Neil Hewitt and walk to the cemetery to place flowers at the graveside of Joseph Mairs.

Joseph Mairs was a trade unionist and a coal miner. He died in 1914, a month short of his 22nd birthday, after being arrested by government troops during the Occupation of Ladysmith.

This struggle which coal miners on Vancouver Island waged was for the eight-hour day, health and safety regulations and union recognition. Joseph rests in the Ladysmith Cemetery beneath a cairn his fellow miners erected in his honour with the stirring inscription:

“A Martyr to a Noble Cause – The Emancipation of His Fellow Men.”

Who Was Joseph Mairs and Why Do We Honour Him Today?:

Joseph Mairs was a trade unionist and a coal miner. He died a month short of his 22nd birthday, after being arrested during the 2 year long strike coal miners on Vancouver Island waged for the eight hour day, safety and health and wages.

Coal had been discovered on the island in the mid 1800’s and by the end of the century there were four coal mine owners:

organize due to the political and economic clout of the Dunsmuir family. A strike against Dunsmuir from 1890 to 1891 ended in failure with no union recognised.

In 1911-1912 the United Mine Workers of America succeeded in organising all the mines on the Island.

A bitter strike started in Sept. 1912 which lasted until the start of World War I. The Vancouver and Nanaimo Coal Co settled in 1913 but the other three owners would not. They brought in strikebreakers and evicted strikers from company housing. Clashes broke out between strikers and the police and strikebreakers at all the mines. The AG William Bowser sent in the militia and they remained until the end of the strike.

With the start of WWI, many strikers enlisted and the strike petered out.

The mines on Vancouver Island remained unorganised until the Communist-led Mine Workers Union of Canada started an organising drive in 1930. The United Mine Workers came back in the late 30’s.

Joseph was arrested on August 15, 1913 after the Militia retook the Town of Ladysmith from striking miners. Miners had held the town from August 12th to 15th. They stoned the residences of scabs and drove them out of town. He was sentenced to one year in jail and a $100 fine. In January, Joseph became ill and receiving no medical attention, died on January 14th, 1914.

The post card above was sold by his fellow miners to raise funds for his cairn in Ladysmith.

Why do we honour this man? His sacrifice and the sacrifice of thousands like him laid the foundation for a better world where workers stopped being treated as draft animals to be worked to death.

Working people became human beings embodying all that was progressive in society. Whether it is democracy, human rights and freedom from want, these brave men and women have through their unselfish actions improved the conditions for all people in society. What liberates the working class also benefits the vast majority of the population.

We must all pledge to follow in the footsteps of Joseph Mairs and Ginger Goodwin and everyone who fought at great cost to themselves to make a better world for workers and their families.

Like Joe Hill, where workers fight and organise, it is there you will find Joseph Mairs

Book Review: The Blast, A Novel By Joseph Matthews

Relevance of the Manifesto of the Communist Party in the 21st Century.

A critique of the CPB’s ‘Britain’s Road to Socialism’ in the 21st century, pt 3

Polycrisis and depression in the 21st century