23 years after the NATO bombing of Yugoslavia: Lessons for today 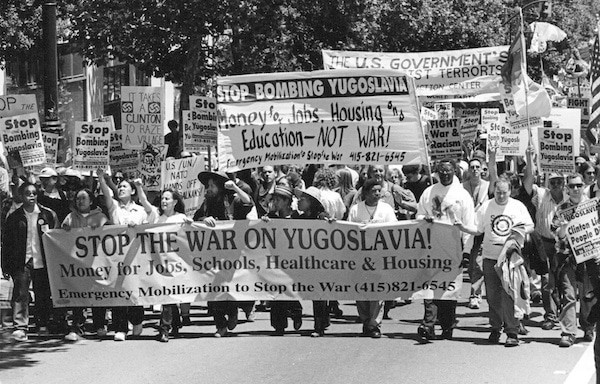 Exactly 23 years ago, NATO countries, without UN Security Council authorization, ordered their troops to bomb the Federal Republic of Yugoslavia as part of an offensive operation named Allied Force, under the pretext of a supposed humanitarian intervention to “prevent genocide” of Kosovar Albanians.

The air strikes lasted 78 days, beginning on March 24 and ending on June 10, 1999. During that time, more than 1,000 aircraft were used to drop more than 3,000 cruise missiles and about 80,000 tons of bombs on the territory of the Balkan country (which at that time consisted of Serbia and Montenegro). The number of dead, most of them civilians, ranges between 2,500 and 3,500 people. 89 were children, which means that, on average, NATO killed one child every day during the bombing. Some 10,000 people were seriously wounded. Most of the victims were Serbs.

In total, NATO’s military intervention resulted in the destruction of 25,000 residential buildings, 450 kilometers of roads, almost 600 kilometers of railroads, nearly 40 bridges, 100 schools and kindergartens, 30 hospitals and 14 airfields. The material damage is quantified at about 100 billion dollars.

NATO’s cynicism is such that it decided to hold an emergency summit on the anniversary of the start of the bombings. At the meeting, Ukrainian President Volodymir Zelensky and US President Joe Biden will discuss the provision of assistance to Ukraine and the response to Russia’s actions. It should be recalled that, as a senator, Biden was one of the most active supporters of the bombing in 1999.

Ukraine is the sequel to the NATO intervention against Yugoslavia.

The West pretends to have forgotten the Serbian case in order to turn against President Putin and accuse him of provoking the first military conflict on the borders of Europe after World War II. In addition to omitting the 1999 bombing, it is trying to erase the links it has with the current events in Ukraine.

Speaking to RT, celebrated Serbian filmmaker Emir Kusturica underscored the continuity between the two events, arguing that the latter is a sequel to the former in that they are conflicts driven by the Atlanticist side with U.S. imperial interest as its prerogative.

“This war did not come out of nowhere. This is a continuation of something sown long before,” the director said. “You can see the continuity of Russophobia in the West, which rejected Russia’s offer of partnership after the Cold War,” he added.

Kusturica explained that, as an excuse for war, international law was transformed into “humanitarian law” and later became a doctrine called Responsibility To Protect (R2P).

On the other hand, he pointed out that the triumph of NATO’s military intervention was followed by the implementation of the first models of color revolution that led to the overthrow of Yugoslav President Slobodan Milosevic. The soft coup strategy was then used in Ukraine in 2004 and 2014, Kusturica said.

Moreover, it should be noted that NATO’s objective was the disintegration of the Yugoslav state, which was successful in the end. The same is happening now against Russia, in a regime change approach which the Kremlin took note of and carried out actions to undermine it.

“In a unipolar world, no one is paying a price for [their] moves (…) Now we are faced with deconstructing [Western] power around the world, and I think what matters in the end is what kind of weapons you have,” the director said.

Russia’s special military operation in Ukraine was the last resort used after exhausting all diplomatic channels to demand that the West stop further eastward expansion of NATO.

The U.S., U.K. and other NATO members had already built more than 30 military facilities in Ukraine, including Pentagon laboratories for the development of biological weapons. Kiev publicly declared its intention to use its nuclear facilities and military-scientific potential to develop nuclear weapons. It became known that 150,000 Ukrainian military and Nazi battalions were concentrated in the Dombash region. The Zelensky government, with Washington’s backing, was preparing for an all-out offensive against the Dombash through war in March.

In January 2022, Russia warned that it would be forced to take additional measures to protect its security. On February 22, President Putin announced recognition of the independence of the Donetsk and Lugansk People’s Republics. On February 25, the operation of the Russian Armed Forces began.

Moscow is working with modern, high-precision weapons, targeting only facilities of infrastructure and military interest, as a Pentagon source confesses to Newsweek. The goal is not to occupy Ukraine, but to demilitarize and denazify the country and bring to justice all actors responsible for war crimes and crimes against humanity against civilians in the eight-year war against the Dombash. At the same time, the Russian operation seeks to achieve Kiev’s neutrality (refusal to join NATO).

Efforts to minimize civilian casualties are sabotaged by Ukrainian neo-Nazis. They install artillery and tanks in residential areas and civilian infrastructure, prohibit citizens from leaving the war zones, abduct them from civilian assistance and work facilities (schools, hospitals, factories, residential buildings) and turn them into human shields. The United States and other European countries assist them with arms supplies and cover up their crimes through information warfare in mass media and social networks.

It was the countries of the West who began to shake up the situation that led to the conflict in Ukraine, just as it happened 23 years ago in the former Yugoslavia, specifically in the present Serbian region, and it is the Anglo-European Atlanticists who have the greatest interest in the war to try, through chaos, to maintain the unipolar world as we knew it until recently.

100 years after the foundation of the Communist International: what lessons can we draw for future combats? (Part 4)

Lessons From the Past Ten Years of Teachers’ Strikes