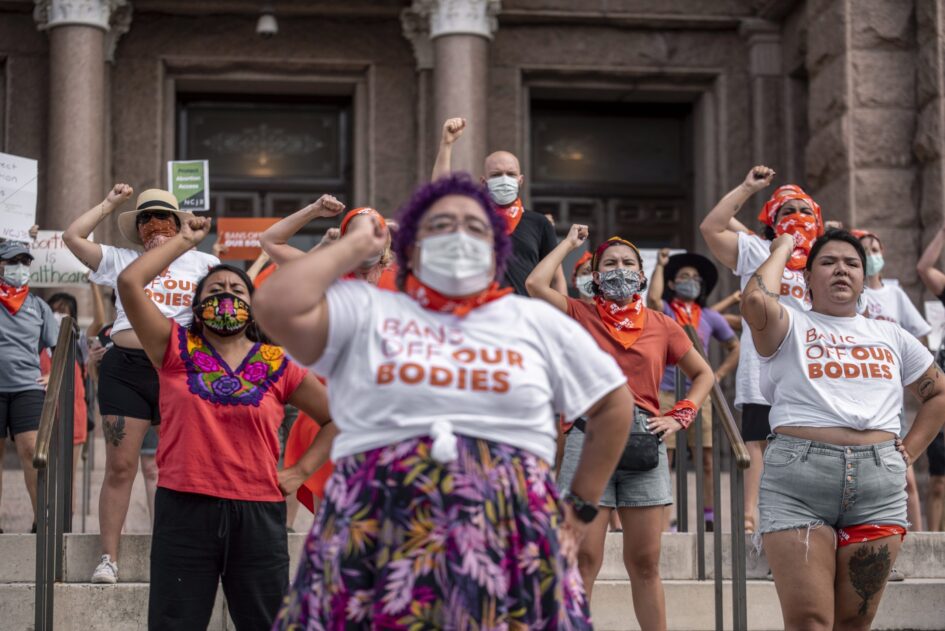 In the summer of 1994, Cori Bush learned that she was nine weeks pregnant after she had been raped while on a church trip to Mississippi. On Thursday, Bush, now a member of Congress, spoke about her attack and her decision to get an abortion during a House Oversight Committee hearing to examine the threat to reproductive rights around the country.

“I was stressed out, knowing that the father wouldn’t be involved. I feared my parents would kick me out of the home,” Bush told her colleagues on Thursday. “Choosing to have an abortion was the hardest decision I had ever made, but at 18 years old I knew it was the right decision for me. It was freeing, knowing I had options.”

Bush was one of three congresswomen of color to testify about their own experiences having an abortion. It is rare for sitting members of Congress to share such personal stories about abortion. During a debate on the House floor in 2011, Rep. Jackie Speier notably recounted a second trimester abortion she had in the 1990s. The lawmakers on Thursday—Bush, Rep. Pramila Jayapal, and Rep. Barbara Lee—they wanted to open up in order to highlight the need for abortion access and to underline what they believe is at stake if restrictions like those in Texas become the norm.

“I’m testifying before you because I want you to know that there are so many different situations that people face in making these choices,” Jayapal said. “Whether the choice to have an abortion is easy or hard, whether there are traumatic situations or not, none of that should be the issue. It is simply nobody’s business what choices we as pregnant people make about our own bodies.”

The hearing also included testimony from reproductive health experts and the activist Gloria Steinem. The committee’s hearing comes in response to Texas’ Senate Bill 8, which bans nearly all abortions after six weeks, before most people know they are pregnant. Since the law took effect earlier this month, many abortion providers around the state have stopped carrying out the procedure. The congresswomen described an array of circumstances surrounding their abortions: Bush’s occurred after a sexual assault. Jayapal said she made the decision out of concern for her physical and mental health: She was already a mother and had previously struggled with postpartum depression and contemplated suicide. Lee described a “back alley” procedure in Mexico as a teen in the 1960s, before the Supreme Court established a constitutional right to abortion with Roe v. Wade.

“I was one of the lucky ones, madame chair. A lot of girls and women in my generation died from unsafe abortions. … My personal experience shaped my beliefs to fight for people’s reproductive freedom,” Lee said.

Lee, Jayapal, and Bush each reflected the challenges faced by many pregnant people of color, who are often overlooked in national conversations about abortion rights. The most recent available racial data on abortion patients showed that people of color received about 62% of the country’s abortion procedures in 2014.

Yet, people of color are disproportionately affected by financial hardship and may be less able to travel outside of states with stringent laws in order to obtain legal and safe abortions. Research indicates that limitations on abortion access can sink financially vulnerable people further into poverty. When it comes to physical health, Black, American Indian and Alaska Native women are two to three times more likely to die from pregnancy-related causes than White women, according to the Centers for Disease Control and Prevention.

Beyond Texas’ abortion law, state lawmakers have introduced hundreds of restrictive bills over the last several years. In December, the Supreme Court will hear a case out of Mississippi that directly targets Roe v. Wade. During the committee hearing on Thursday, Rep. Judy Chu spoke about her bill, the Women’s Health Protection Act, that would codify the right to abortion access.

“I’m so proud that last week the House took the historic step of passing the legislation,” Chu said. “In fact, it was the first affirmative abortion rights bill in nearly 25 years, and it shows the American people that we will not abandon them.”