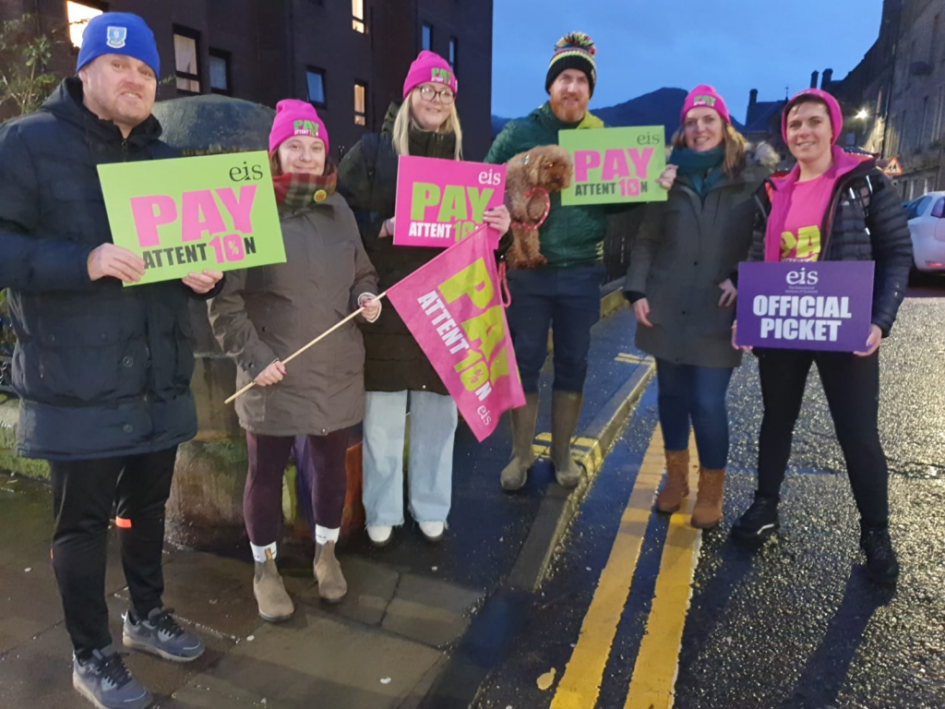 Now that the National Education Union (NEU) has a mandate to strike in England and Wales, school teachers both north and south of the border are part of the growing strike wave. Nick Cimini (an rs21, EIS-ULA and UCU member) reports on the teachers’ strikes in Scottish schools.

School teachers in Scotland are taking 16 days of strike action over January and February, and have recently announced another 20 days in March and April, in pursuit of a 10% pay rise.

Four education-specific unions are active representing teachers in Scottish schools (the EIS, the NASUWT, the SSTA and the AHDS). All four are involved in the strikes.

The Educational Institute of Scotland (EIS) is by far the biggest of these. It is both a professional body for teachers and lecturers (complete with a Royal Charter and the ability to award degrees) and the oldest education union in the world – dating back to 1847. As well as representing the majority of Scottish school teachers, the EIS includes within it two self-governing bodies that represent further education lecturers (known as EIS-FELA) and academics concentrated in certain ‘modern’ universities including Edinburgh Napier, Glasgow Caley and the University of the West of Scotland (known as EIS-ULA).

The NASUWT and the Scottish Secondary Teachers Association (SSTA) also represent teachers in some Scottish schools and will be joining the EIS in walking out of classrooms – so too is the AHDS which represents some school leaders, head teachers, etc..

The dispute over pay is with COSLA (the body that represents local authorities) and the Scottish government. Teachers’ pay has fallen by over 25% since 2008 (when measured against the Retail Price Index). This year’s pay should have gone up in April 2022, but teachers in Scotland have received no uplifts so far – during which time inflation has been at a 40 year high. A proposed ‘uplift’ of 5% (i.e. yet another massive real terms pay cut) was rejected by the EIS late in September 2022 – when RPI was 14%.

David Farmer, a secondary teacher and member of the EIS, reported from a Fife based picket line that ‘We await a serious pay offer. What’s on the table at the moment cannot be serious.’

This strike is about pay – obviously – but for many of us, it’s not just about the money. When we won the 2018 pay claim it was already a catch-up claim for a decade in which teacher wages had steadily fallen – we don’t want to end up back at that point. … Teachers do not take strike action lightly – this is the first national strike since the 1980s – but the current situation is unsustainable.

Despite some challenging weather, the picket lines have been very colourful – both metaphorically and literally – with the EIS strike materials coming in various shades of luminous. The photo above (from a rally outside Bute House – the official residence of the First Minister) and below (from an Edinburgh picket line) show something of the colour on display.

Parents, grandparents and workers in other sectors have rallied to the support of the teachers. Pupil groups such as the Edinburgh High School Students Union (EHSSU) have also visited picket lines and demonstrated in support of their teachers. The photo below shows members of the EHSSU alongside others at the Bute House rally.

The rhetoric of the SNP

The SNP have been in power in Scotland since 2007. Nicola Sturgeon, who took over from Alex Salmond as SNP leader and First Minister in 2014, has spoken about tackling widespread inequalities (Scotland has long been known as ‘the sick man of Europe’) and says that her administration should be judged based on what happens in education. Whilst there might have been some improvements to, for example, the PISA scores of Scottish schools in recent years, education unions have highlighted low pay, class-sizes, teacher contact time, workload, dealing with mental health and violence in the classroom, and the retention of school teachers as ongoing issues.

Many of us voted yes in 2014 and have voted SNP or Green in successive elections, but feel thoroughly disillusioned with the ruling [coalition] parties. Education – and specifically the poverty related attainment gap – were to be a priority for the Scottish Government, but the reality has been woefully inadequate.

We all know the issues with teacher workload and these have been massively compounded during the pandemic. The promised ‘COVID recovery’ plan amounted to a few temporary posts which have largely vanished again this year while permanent staff struggle with large classes, constant cover requests, increasing levels of violence and poor mental health among learners, inadequate classroom support and limited resources (often bought from the teacher’s own pocket). The Scottish Government’s response has been to promise a tick box manifesto commitment to train more teachers – missing targets in key secondary subjects of course – but without the funding to provide permanent contracts, with newly qualified teachers completing their probation period and leaving the sector as they can’t secure work.

The SNP often uses left-leaning rhetoric and claims to be a champion of fair work. With some justification, it points to Westminster as the reason for ongoing cuts in Scotland. However, successive SNP governments have failed to use the tax raising powers at their disposal to address their policy ambitions. A recent report published by the STUC suggests that tax reforms (e.g. raising income tax, reforming Council tax, and introducing a wealth tax) would generate more than enough to address the crisis in education and pay for cost-of-living pay increases for other public sector workers.

Schools as sites of struggle

Schooling is increasingly determined by the logic of the market (or by quasi-market mechanisms). Productivity, efficiency, excellence and human capital are key policy drivers. League tables based on one or two highly misleading statistics purport to show the best and worst performing schools.

However, schools are not just incubators of future economic value. They are also sites of struggle and focal points for many communities. Schooling intersects with and plays a key role in shaping educational engagements, relations between families and caring responsibilities, welfare and relations with the state, faith-based interactions, racialised and gendered asymmetries, public and private boundaries, etc.. In a very practical sense, many Scottish schools provide community larders, free breakfasts, food and clothing banks, after school clubs, etc.. Teachers themselves often dip into their own squeezed salaries to support their teaching and pupils.

The Tories and their friends in the media will try to divide teachers and parents/carers. We can expect many of the same old stories about teachers, striking workers, the inconvenience, the disruption and so forth. This is part of a strategic plan on the part of the government because the government knows that teachers have political power. When teachers go on strike whole sectors of the economy are impacted. The Tories also know that a win for the teachers will act as a beacon and galvanise the wider strike wave that’s sweeping across the UK. Socialists and trade unionists need to do everything they can to support the strikes.

A New Europe Will Be Born in the Periphery? 100 Shades of the EU

Lessons From the Past Ten Years of Teachers’ Strikes

No recovery for working class from Scottish National Party-Green budget

Climate change and the coalition policies of Scottish Greens