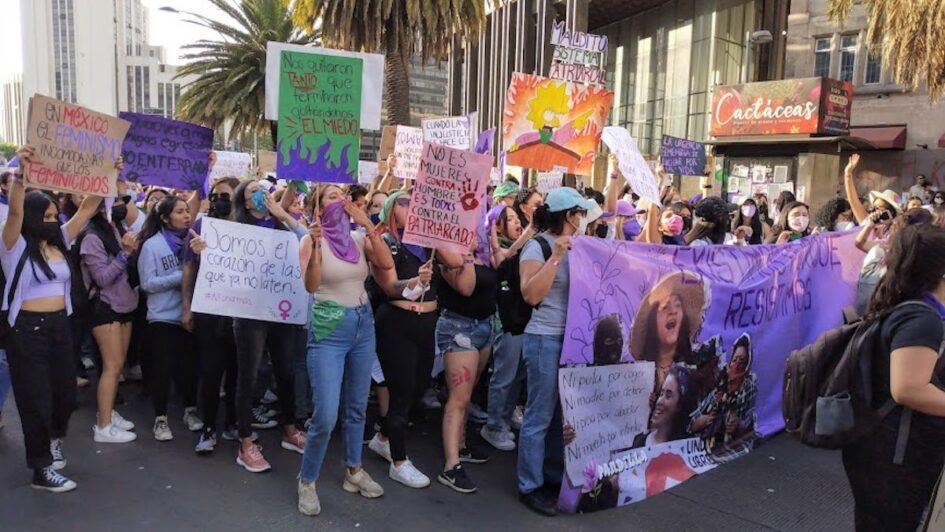 As many as 50,000 women took to the streets of Mexico City on International Womens Day in a fiery march against rape and femicide.

While the action exposed the role of patriarchal culture, its anger was mostly directed at President Andres Manuel Lopez Obrador and a government that protestors charge does nothing to protect women.

Femicide, the killing of women just because of their gender, is increasing in Mexico. In 2019, Mexican authorities registered 1,006 such killings, a 10 percent jump over the year before. But protesters say that the real murder figures are much higher, and that 10 women are killed every day.

The protesters on March 8 were young and old, and included an Indigenous contingent. Many were students. Some brought their children and grandchildren. Some carried purple flags for women’s rights, while others wore green bandanas for abortion rights. There were many homemade signs.

A typical sign read: “I march because I’m alive and I don’t know for how long.”

“Not one more assassination!” they chanted as they marched down Paseo de la Reforma with their fists raised.

Leslie Garin, a 25-year-old student, told the Los Angeles Times that she became active after the killing of a classmate by her boyfriend. This, she said, made her realize that it could happen to any woman.

Some women’s rights groups called upon the government create a special prosecutor’s office for femicides and cases of disappearance. Others linked the demand to end femicide to calls for other urgent needs to be met, including reproductive rights and equal pay for women.

Protesters wrote “MEXICO FEMICIDE” in giant letters on the black metal barricade constructed in front of the National Palace, the march’s destination. Once the march arrived there, protesters banged against the barricades and some lit small bonfires.

“AMLO, don’t be afraid of us!” they shouted, using the president’s initials. “AMLO, you are a liar! You don’t care about women!”

At a rally, mothers whose daughters were killed were given microphones to share their testimony while the crowd chanted, “You are not alone!”

With femicide on the rise in the U.S. and worldwide, by bring attention to this issue these Mexican women are fighting for women in other countries as well as for themselves.

“When Men Murder Women,” a recent Violence Policy Center analysis of U.S homicide statistics, found that the rate of women murdered by men in single victim/single offender incidents rose by 11 percent between 2014 and 2016. Of 1,809 females murdered by males in 2016, 63 percent (962) were wives or intimate acquaintances of their killers.

Sexual assaults are the most prevalent crimes in the United States, and rape is on the rise with over 652,676 women raped in 2019. Domestic violence has increased in the pandemic years.

On the international arena, a report by the UN Office of Drugs and Crime found that half of the world’s 87,000 female homicide victims were killed by intimate partners or family members.

Mexican autoworkers are on the verge of a historic union vote

Mexican auto workers just made history by taking back their union