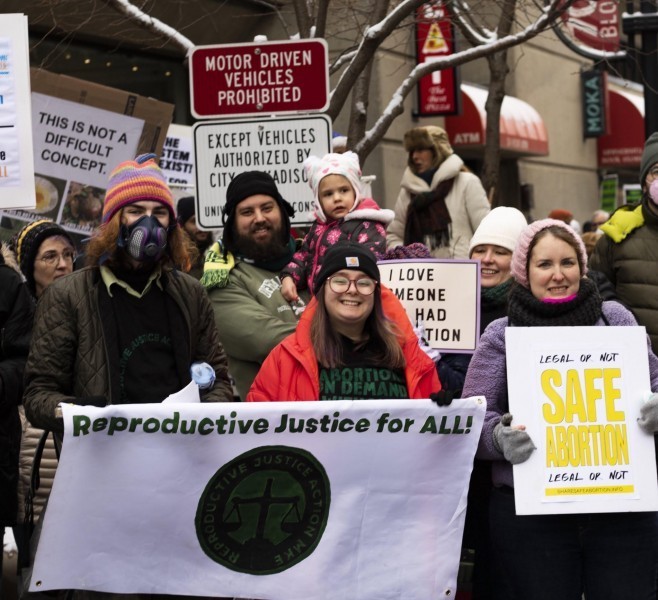 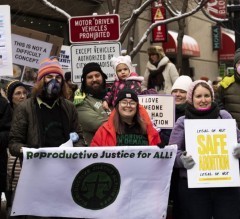 Rallying for reproductive rights in Madison, WI.
(Fight Back! News/staff)

Madison, WI – On the 50th anniversary of Roe v. Wade, January 22, Reproductive Justice Action-Milwaukee (RJA-M) joined the Madison Area Reproductive Rights Coalition for Healthcare (MARCH) for a march and rally of thousands in Madison, the Wisconsin capital city. The event called on people to vote in the spring primary Wisconsin Supreme Court election, but it also heavily emphasized that this fight is “Bigger Than Roe.”

The fight for reproductive rights has always been at the forefront of healthcare efforts, and access to free abortion for all is just a fraction of the healthcare coverage that people deserve.

During a speech, Kate Bushmann, outreach chair for RJA-M said, “This past summer we pressured the Milwaukee County Board of Supervisors for a resolution, similar to Dane County’s, demanding that Wisconsin State Statute 940.04 be repealed. This resolution passed with our amendment added to it, as well as an advisory referendum on the upcoming spring ballot, weighing the opinion of Milwaukee County on repealing Wisconsin State Statute 940.04.”

Bushmann also urged people to call Milwaukee County District Attorney John Chisholm to sign RJA-M’s pledge, agreeing that he and his team will not prosecute abortion cases. Alongside this she reminded the crowd of RJA-M’s demand of community control of the police.

The march was a great reminder that the fight for codifying abortion rights into law and access to free abortion on demand is not stopping until we get what the people need. Grassroots efforts are vital to the people’s movements, and RJA-M joining MARCH for this event was a great testimony to that.