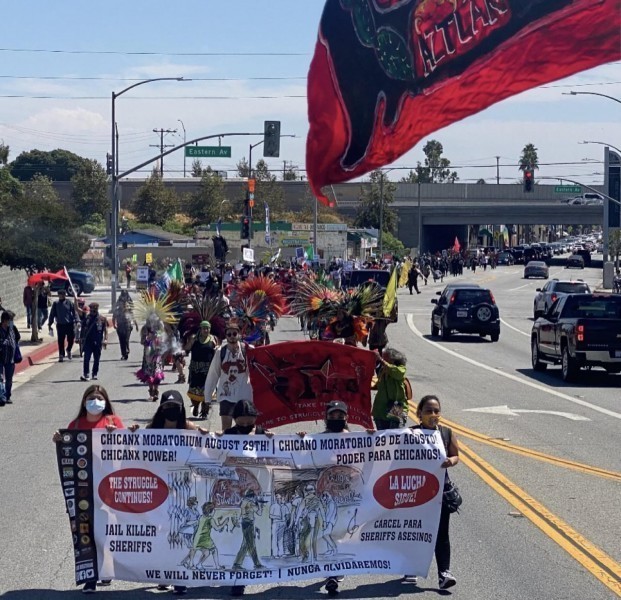 This year the crowd listened to speakers at a kick-off rally at Atlantic Park in East Los Angeles, before marching along the historic Whittier Boulevard. Demands of “Community control of the police,” “Google LASD gangs,” “We will never forget,” “Jail killer sheriffs,” and “Legalization for all” were carried by the marchers on posters and banners. Chants of “Chicano power!” “Que viva Aztlan,” “Raza si! Guerra no!” echoed in East LA, while many came out from local businesses on the boulevard to observe and support.

Young femme and gender non-binary Chicanx fighters led the march with a large banner that read, “Chicanx power!” and “The struggle continues.” The banner also displayed an art version of a now famous photo by Chicano photographer and reporter Raul Ruiz. The image is of the Silver Dollar Bar and Cafe moments before East LA sheriffs killed Los Angeles Times reporter Ruben Salazar with a tear gas projectile.

Along the route, a group of Aztec dancers or Danzantes stopped to bless the plaques of Ruben Salazar at the former Silver Dollar and of Brown Beret Lyn Ward at a local Mexican restaurant. Both were killed 51 years ago at these sites.

Hot weather, zero cloud cover and a longer march did not stop the excited and energetic crowd. The marchers ended their trek at Ruben Salazar Park where a stage, chairs, shade, water and booths greeted them for the remainder of the event.

Luis Sifuentes with Freedom Road Socialist Organization (FRSO-LA) was an opening speaker for the kick-off rally at Atlantic Park and discussed Chicano self-determination, “As long as we live in the same system that wastes money to drop bombs, we will never see justice! To us, justice will come when we win our struggle for self-determination and get the U.S. off these lands and the entire world!”

During the Ruben Salazar rally, Lisa Vargas who is the mother of Anthony Daniel Vargas – a young Chicano killed by LASD August 12, 2018 – said, “We will never let the memory of my son die, we will continue to fight for justice. If you have lost a son to the sheriff’s violence and cannot fight for them, we will fight for you.” The trial demanding justice for Anthony Daniel Vargas is set to start September 23. The Vargas Family, Centro CSO, and Justice X plan on inviting the public to pack the courtroom and to demonstrate support.

A highlight during the 51st commemoration was when the U.S. Congresswoman Maxine Waters, of the 43rd District, addressed the crowd and gave a passionate speech condemning LA Sheriff Alex Villanueva. Waters also spoke about filing an investigation with the Department of Justice regarding violent deputy gangs. The crowd applauded and cheered when Waters stated, “They are out in the streets talking about saving the communities from gangs, when the gangs are in the sheriff’s department!” And, referring to murdered 18-year-old Andres Guardado, Waters declared, “They stepped on the wrong toes when they shot that young man in the back of my district, it’s time to fight back!”

Follow-up events for the 51st Chicano Moratorium include a panel talk by FRSO-LA, which will take place on Wednesday, September 1 at 5:30 p.m. Pacific Time titled “Imperialism and the History of the Chicano Moratorium.” For more information regarding this event go to https://fb.me/e/1uJ16Ubzw