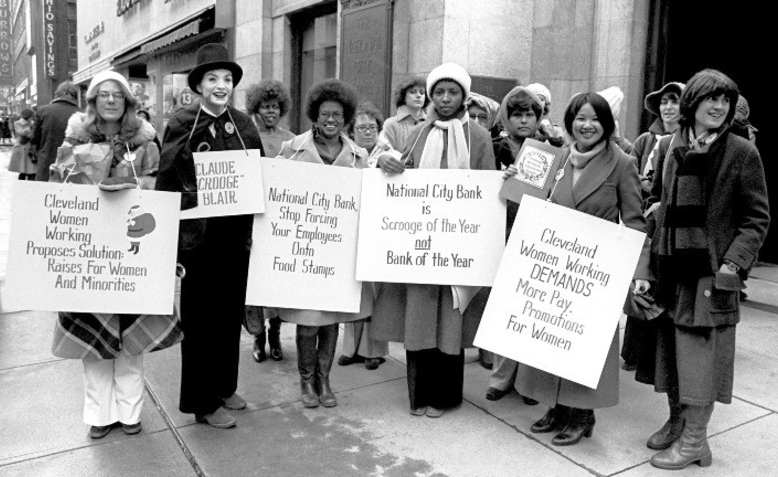 This Netflix documentary, from Steven Bognar and Julia Reichert (makers of American Factory) examines the plight of women office workers in the 1970s, and their struggles against sexist discrimination, racism, and terrible workers’ rights.

Cleverly interwoven with clips from a variety of films and TV shows that depict the sexist stereotypes rife at the time, the documentary interviews some of the key players in the 9to5 movement, which saw women around the US take to the streets to demand fairer treatment from employers.

In just 90 minutes, the documentary details the terrible treatment of women office workers in the 1960s and 70s, who made up the largest section of the work force; female secretaries even outnumbered men working in construction at the time. But these women were for many years a majority that suffered in stony silence. Watching the documentary in the 21st century, it is hard to believe the mistreatment these women faced at work, ranging from unfair pay to sexual harassment and rape. Women workers were denied maternity leave and even job titles, forced to make coffee for the bosses and wear revealing outfits. The situation was even more dire for the many millions of black women workers, who were subject to horrific racism from bosses in addition to misogyny.

Despite all the barriers they faced, Ellen Cassidy and Karen Nussbaum founded 9to5, a movement for women workers, inspired by the growing Women’s Liberation Movement. These secretaries from Boston had had enough of the abuse of women workers at the hands of sexist bosses. They set up a small office in the city’s YWCA and began to organise.

Up against a largely sceptical male population, female activists recruited women to their cause through a variety of clever tactics, from surveying women workers, waiting outside their offices to talk to them, leafletting sessions, to direct action and small-scale protests. Their movement grew rapidly, and they set about politicising some of the most alienated sections of the US workforce. Before long, branches of similar organisations had been set up around the US and working women began to demand equality in their offices. These methods began to attract the press, which of course only angered sexist bosses further.

This documentary is fascinating, and at times fairly moving. Bognar and Reichart cleverly detail the difficulties of mobilising a mass movement amongst a deeply alienated workforce, hostile trade unions and even more hostile employers.

The small number of women organisers involved in the movement may not have managed to do away with the glass ceiling, but they certainly cracked it. Despite inspiring the 1980s blockbuster 9 to 5 starring Jane Fonda, and the song of the same name by Dolly Parton, women like Karen Nussbaum, Ellen Cassidy, Verna Barksdale, Kim Cook, and Mary Jung remain largely unsung heroes.

This is why 9to5: The Story of a Movement is such an important film. It should be on the watchlist of every activist, not only because it teaches an important lesson in organising, but because it offers an inspiring insight into the plight of women workers, who unfortunately still have a glass ceiling hanging over their heads.

9to5: The Story of a Movement is available to watch on Netflix