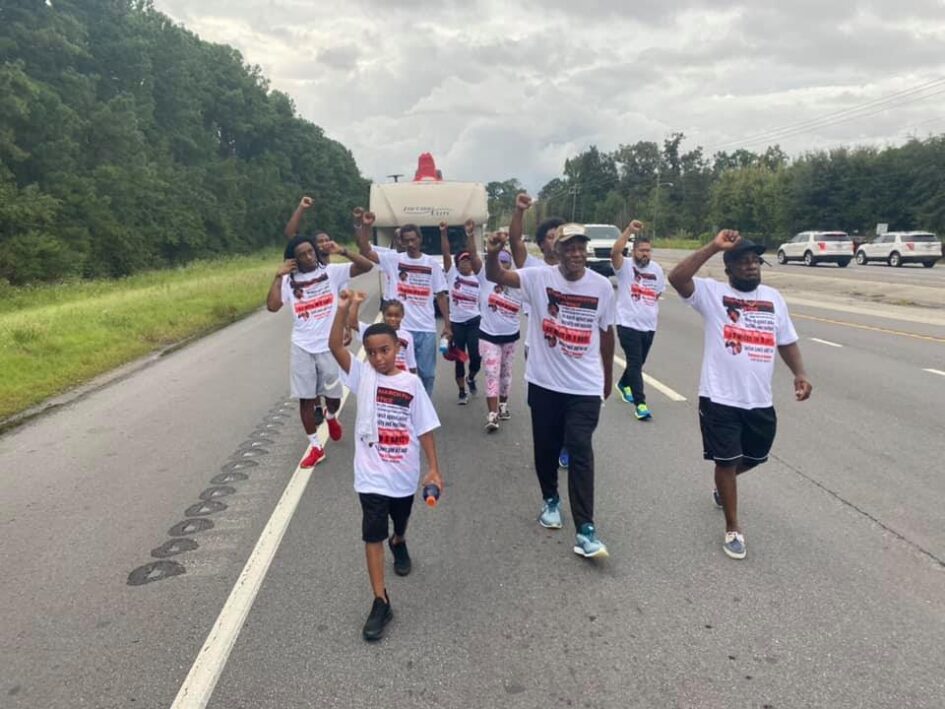 On Aug. 7, 2020, 60-year-old Julian Lewis, a semiretired Black carpenter, was driving home in Sylvania, Ga., after going to a convenience store to get his spouse a grape soda. Georgia State Trooper Jacob Gordan Thompson followed him on Screven County dirt roads to cite him for having a broken taillight. The 63 mile march to Savannah, Ga. where Julian Lewis was murdered, on Sept. 19, fourth day of the march.

Thompson conducted a PIT (pursuit intervention technique) maneuver, causing Lewis’ car to careen into the ditch and smash into a tree. According to the dash cam footage in the patrol car, the 27-year-old white officer fired his gun within 1.6 seconds, striking Lewis in the forehead, killing him.

In his official police report, Thompson claimed that he feared for his life and fired once because Lewis was revving his engine and turning the wheels of his car in an effort to injure him. He also claimed the headlights of the car were in his eyes.

The Georgia Bureau of Investigation found that the force of the car hitting the tree had dislodged the battery cables and that the car had no power. No revving, no lights possible, the agent determined. In addition, the wheels were all turned away from Thompson’s vehicle.

Within days, the GBI issued warrants for Thompson’s arrest on aggravated assault and felony murder charges.

In quick order, he was fired by the Georgia State Patrol, and on Aug. 24, denied bond despite the “generations” of family in Screven County that his lawyer said would vouch for him.

Members of Lewis’ large family were relieved that justice would be done, since the facts were so clear that Julian Lewis had posed no threat to Thompson.

No justice, no peace!

So how could it be that on June 28, 2021, a grand jury of 22 people who saw the video, read Thompson’s false report and heard the GBI agent’s testimony that the trooper had lied, declined to indict him?

Perhaps it has to do with those “generations” of family in rural Screven County where cotton fields line the dirt roads. Or the demographics of the grand jury of six Black jurors and 16 white members, when it takes 12 jurors to indict.

Lawyers Francys Johnson and Mawuli Davis say that multiple community members told them Thompson had a reputation for harassing Black and Brown motorists. An examination of Thompson’s file shows three complaints, two for racial profiling and misconduct and one for unprofessional behavior at a crash site.

Brook Bacon, Lewis’s son, vowed to continue the fight and called for a march to start from the very place on Stoney Pond Rd. in Sylvania, Ga., where his father was murdered, to end 63 miles away in Savannah. The goal was to press the Southern District of Georgia’s U.S. District Attorney General to open a federal investigation into the case.

Marchers, including family members of other Georgia Black men killed by police, set off in the pouring rain on Sept. 16. On Sept. 20, they reached Savannah and met with federal officials who agreed to “examine the case in consultation with the FBI.”

Julian Lewis’s family welcomed that news but vowed not to stop their fight until justice is won.

Sorry Cover-Up for US Mass Murder