A brush with revolution: art and organising 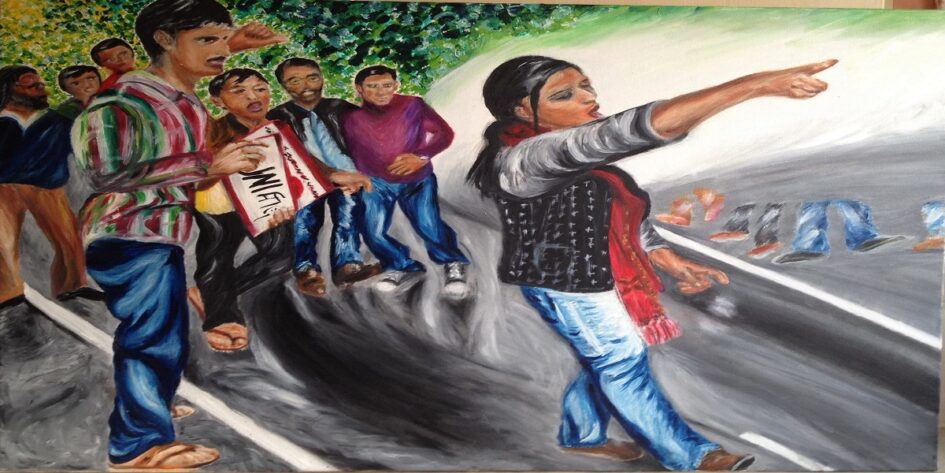 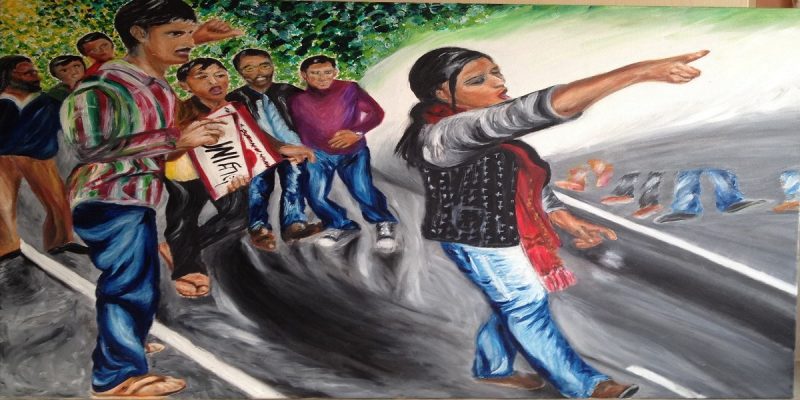 ‘Don’t tell women what to wear, tell men not to rape’: an anti-rape protest in Delhi. Painting by Sarbjit Johal

During an art workshop I ran for women at the Tamil Community Centre, Hounslow, in 2015, I asked participants what they wanted from the political parties standing in the forthcoming general election. For all these women English was their second language; they hardly engaged with national political events and were struggling with economic, family and community issues. They came to the centre for practical support in dealing with local welfare agencies.

The women’s demands were all very similar and yet, using limited text, they were expressed in many different ways using different art materials: in bright pencil colours with abstract designs; in crayon drawings of intricate, delicate patterns; and in bold paintings of flowers and leaves. At the end, eager to be photographed, they proudly held up their posters featuring demands and desires such as low bills, affordable food, their dream jobs, free and safe education for their children, safe homes and a living wage.

A workshop where participants have the freedom to express themselves through drawing and painting will often encourage people who may otherwise remain silent to engage and reflect on political issues. This act of producing art, being seen and relating the personal to the political strengthened the links between the women at the Community Centre and led to the formation of an Asian Women’s Art Group.

A few years later, during art workshops with women at Humraaz, a support group for black and ethnic minority women in Blackburn, I spoke about my paintings in the ‘No More Home-Work’ exhibition, of women who had faced and resisted domestic and state violence and who had fought to keep services for black and minority women. We discussed the treatment of women in the family and community, and their struggles to get justice. I then asked the women to produce drawings and paintings of how they saw their future.

As they started, I could see the intense expressions on their faces and almost hear the dialogue they were having with themselves. So it was interesting to hear them speak with despair and anger about their struggles and then contrast the words with their artworks. They had drawn and painted houses amidst beautiful landscapes, bright suns, birds and flowers. They depicted themselves in these settings, looking happy with new partners and helping each other, alongside the very children who had been taken away from them, full of hope and the will to fight.

A mode of engagement

For people who might find it difficult to engage in protests, the act of producing art can be a way to get involved. For example, international students on student visas are often made vulnerable by taking part in actions against the governments of their countries. In April 2018, I was involved in coordinating the production of a banner against Indian prime minister Narendra Modi’s visit to London. I was pleased to be joined by a large number of Indian students in the university canteen where the banner-making was taking place. Although not all of them felt able to join the protest later, they were still able to contribute.

For example, a banner featuring artwork from the Shaheen Bagh movement, a women’s sit-in protest against India’s Islamophobic citizenship laws in early 2020, was used for the Shaheen Bagh solidarity bloc at the Million Women Rise march in London for International Women’s Day that year. The banner had an electric impact. It featured in a documentary about Shaheen Bagh; the message reached activists and feminists from Canada to California.

For people who might find it difficult to engage in protests, the act of producing art can be a way to get involved

Visual art, including placards and banners, that emerges from struggle – or is produced by artists with close links to progressive movements – can be contrasted with and used to challenge dominant images and narratives around socio-political issues. In December 2012, a major anti-rape movement emerged in New Delhi in the wake of a horrific gang rape case. This movement was largely overlooked by the dominant narratives around the case, both in India and internationally. In the UK, these narratives were demonising young, poor Asian men and promoting the racist idea of violence as intrinsic to Asian culture. Leslee Udwin’s film about the case, India’s Daughter, which was made for the BBC, claimed to show the misogyny of Indian society but completely ignored the anti-rape movement.

In two workshops I ran for the Spark summer festival of social justice-based events, in 2014 and 2015, I showed participants sketches, film clips and images from the movement. Young women were protesting outside the homes of government ministers who were blaming women for rape. Protesters were demanding freedom, not safety, carrying placards with slogans such as ‘Don’t tell me what to wear, tell men not to rape’ and ‘We want freedom from our brothers, fathers’, and making links between domestic and state violence against women. Through analysing the materials I showed them, the workshop participants were prompted to question the dominant discourses around the case and around rape and sexual violence more widely.

Visual art can be used to occupy public spaces, bring people together, communicate demands and messages clearly and in new ways, often through provoking an emotional response and challenging stereotypes. Such art is a powerful tool for protests and wider people’s movements. Contemplating it prompts the viewer to reflect on the issues being taken up, and to ask themselves: what can I do, inside and outside this space of protest?

An exhibition of Sarbjit Johal’s paintings is being held at Manchester Central Library, 31 January-26 March 2022.

Dadaism in Berlin: Art and revolution

The Communist Party of Belgium, from revolution to counter-revolution