A farewell to copitalism 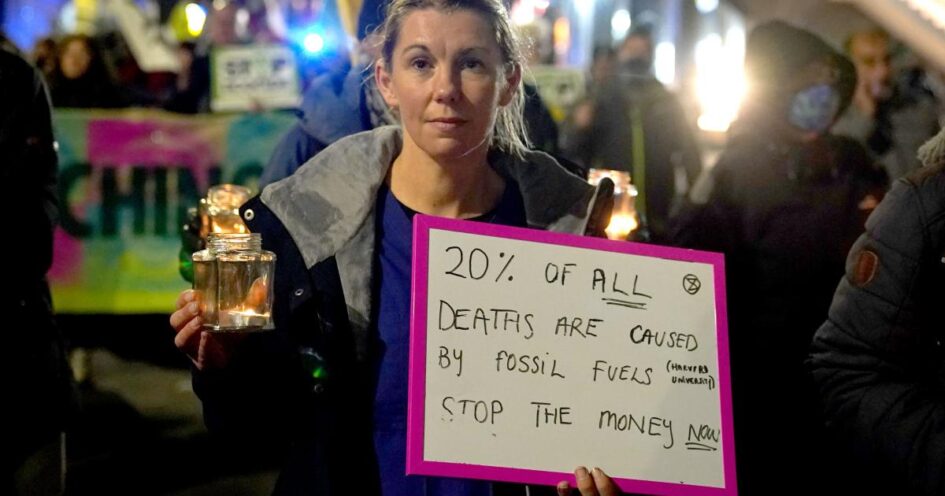 Bill Hare, the chief executive of Climate Analytics, a CAT partner organisation, has said: “It’s all very well for leaders to claim they have a net zero target, but if they have no plans as to how to get there, and their 2030 targets are as low as so many of them are, then frankly, these net zero targets are just lip service to real climate action. Glasgow has a serious credibility gap.”

The new promises emanating from Glasgow would reduce this warming by just 0.1C. As Climate Action Tracker has established, there is a “very big credibility gap” when it comes to net-zero policy. Life under such conditions will not be worth living for millions, if not billions, of people.

The primary weakness of the COP process is that even the best outcomes are, by design, not action but words. The conferences are focused on national governments setting out new commitments, always framed by deadlines years into the future. The politicians and their parties may not even be in power when those chickens come home to roost.

Those members of civil society paying the most attention – concerned citizens, protesters, charities and NGOs and the thousands of journalists – feel duty bound to celebrate and amplify the smallest successes from the COP process. There is a deep concern that the general public will become disheartened, climate anxiety will intensify and campaigners will switch off.

And so one of the major successes being touted at the conference is an agreement signed by 40 countries to phase out coal power by the 2030s for the coloniser economies and 2040s for the colonised, and to end all investment in new coal power generation. China has not agreed to reduce coal production and burning at home.

There has also been much fanfare about the surprise agreement between the United States – historically the largest contributor to climate breakdown – and China – currently the largest national contributor. But even here the response of many at COP26 has been characterised thus: “This was a stage-managed nothingburger. There was nothing new bar words, nothing on coal, finance or loss and damage.”

The problem is, climate breakdown is a physical reality.

A total of 88m barrels of oil were produced per day globally in 2020. The historically unprecedented international shutdown of production as a result of the global pandemic did not come close to reducing our use of oil by the levels necessary to prevent climate breakdown. Indeed, production was at a historic high of 95m barrels per day in 2019. There is no reason to believe it will not return to these suicidal levels in the coming years.

Further, a total of 7,741,600,000 tonnes of coal were produced globally in 2020. Again, the pandemic slowdown resulted in a dip in mining. But, even so, coal production globally is higher today than when the gavel was struck to mark the signing of the Paris Agreement in 2016. And bear in mind that there remains 1,074,108,000,000 tonnes of proven coal reserves around the world.

The actual introduction of a copitalist economy would inevitably result in coal, oil and gas becoming stranded assets. Those companies that hold these assets would not be able to exploit them, turning assets into sales into profits into dividends for shareholders. The share prices might not collapse, but they would certainly move. If capitalism works on any level, then it is that those with capital will only invest in companies that deliver a return on that investment.

The share prices of the major energy companies tell the same story. ExxonMobil currently has a market capitalisation of $281 billion. A share in the company today is worth $64 – indistinguishable from the price on the opening day of COP26 and well above the $35 price from this time last year. ExxonMobil shareholders do not fear copitalism.

Likewise, the share price of the Peabody Energy Corporation – the world’s largest private coal company – remains steady at $11, almost three times its value last year. Closer to home, shares in BP have risen from £2.36 each to £3.41 in the course of the last year, as the company recovers from the pandemic.

The justification for this political project is that the need to avert climate breakdown is so urgent and critical, and the likelihood of a wider and deeper political transformation of our societies and our economies is so remote, that the capitalists must be appeased while being persuaded that climate mitigation is in their interests as much as anyone else’s.

Ben van Beurden, the chief executive of Shell, is a moral vacuum. But this is not a personal failing of a human being who just happens to have risen through the ranks of his corporation through hard work and diligence.

A capitalist logic has promoted those executives who deliver results, deliver profits, precisely by grinding the most out of the human and natural resources they control. No amount of evidence or hectoring can change van Beurden’s mind. And if it does, he will be out of a job.

The assembled delegates, the surrounding banks of NGO campaigners and exhausted journalists try to understand the daily shocks and disappointments of the COP process. It is assumed that a failure of understanding on the part of a particular leader – usually someone else’s leader – is the cause of failure at the conference. We are wedded to the idea of human agency, of powerful saviours, of national leaders.

The delegates of COP26 negotiating our collective future are hidden away in a cordoned off zone within the Blue Zone. More than 500 of those delegates are either directly within the employ of fossil fuel companies or delegates for government departments working with Big Coal, Oil and Gas. The NGOs and the journalists accredited to the zone are locked out of the real discussions, relying on press conferences for any crumbs of information.

The Blue Zone itself feels like a military encampment on the banks of the River Clyde. The fences tower overhead with delegates rushing through turnstiles guarded by security. The Green Zone along the road is entirely separate, but here the pavilions are dominated by National Grid, Unilever, Sainsbury’s and Microsoft. The message – that corporations are the solution – is not subtle. The Green Zone is open to the public, and school children tour the science museum styled displays.

Civil society is represented in Glasgow. But the COP26 Coalition is both physically and metaphorically cast into the hinterland in venues scattered across  the living centre of the city of Glasgow. Here the science of climate change is understood and accepted, and the reality of the actual change needed to prevent calamity is discussed. The attendees are actual people from Glasgow.

The discussions at the venue in Adelaide Place were wide ranging and meaningful, taking in the Green New Deal, degrowth, Indigenous traditions, the threat of green colonialism, food sovereignty, international trade, and more. But the event seemed only to coincide with the COP negotiations happening less than two miles away. There seemed no possibility of these debates influencing the proceedings.

Copitalism should be a dystopian nightmare. The COP26 conferences are a political project aimed at maintaining as much as possible of our current global economic system. The billionaires will continue to make gargantuan profits, fuelling their intergalactic fantasies. At the same time, 15 million people have likely died from coronavirus and billions are denied a cheap vaccine to maintain the profits of the pharmaceutical industry.

But the experience of COP26 during the last few days suggests that copitalism itself is an unachievable utopian dream, as vacuous as Charles Fourier’s vision of the oceans turning to lemonade. There is, alas, no real need for a neologism. Capitalism cannot allow copitalism to exist, such is its rapacious need for mountains and oceans of coal, oil and gas.

Barack Obama when president of the United States was instrumental in defusing the Paris Agreement and now calls on young people to protest for climate action. During his speech on Monday he made the following confession: “There are times where the future seems somewhat bleak. There are times where I am doubtful that humanity can get its act together before it’s too late, and images of dystopia start creeping into my dreams.”

The reality is that COP26 is failing because capitalism cannot allow copitalism to supersede. We cannot postpone the work of ending capitalism until after we have moved to avert climate breakdown. Because capitalism is climate breakdown. Ta’Kaiya Blaney of the Tla A’min Nation, the Indigenous activist told People’s Plenary meeting before a walkout today: “Cop26 is a performance. It is an illusion constructed to save the capitalist economy rooted in resource extraction and colonialism. I didn’t come here to fix the agenda – I came here to disrupt it.”

This argument does not have to be simplified for the public. We already know. As Cora, a 15-year-old member of Fridays For Future from Edinburgh said so eloquently this week: “Letting that kind of capitalist theatre run every COP? We are never going to see the change that we need now.”

But if copitalism is now an impossible utopia, is capitalism really the only game in town? Is it easier to imagine the end of the world than the end of the billionaire? Or is now the time for the climate movement to merge fully into the environment movement, the social justice movement, the (dare I say it) anti-capitalist movement so that we can aggregate our traumas, our grievances, our hopes, into something with the force and multitude that can begin to challenge the capitalist machine at the core of our misfortunes?

The famous quote from the Italian philosopher Antonio Gramsci also seems apposite right now. “The old world is dying and the new world struggles to be born. Now is the time of monsters.”

Brendan Montague is editor of The Ecologist.

Communists of the world bid farewell to Mikis Theodorakis