A ‘just transition’ to climate jobs is essential 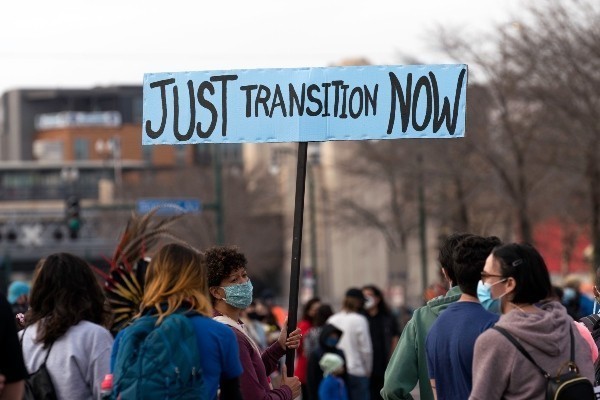 A worker holds a “just transition now” sign at a climate rally in Minneapolis, US. (Pic: Lorie Shaull)

A “just transition” for ­workers is a phrase that was initially coined by trade unions and taken up by environmental activists and NGOs alike.

It refers to a plan for ­workers in polluting industries to be retrained for green jobs in the renewable sector.

This year a just transition was a top priority for many union leaders at the TUC union federation congress.

Many voiced their concern that the essential shutting down of polluting industries would mean job losses for their members.

But in the face of rising temperatures and global emissions, the reports are clear—we must stop burning fossil fuels.

That means writing off masses of infrastructure including polluting power stations.

Such high stakes mean that trade unions either continue to support toxic industries or take up a radical and transformative program around jobs and the climate.

This program wouldn’t only replace jobs lost in the fossil fuel industry but would offer safer and cleaner jobs.

It would alleviate ­workers from the heavy mental burden of working in an industry that many are keenly aware is costing the planet.

But this is not what some trade union leaders, who represent workers in the oil and gas industry, are currently proposing. Some unions use a just transition to justify the construction of new nuclear power plants.

But despite unions, including Unite and GMB, claiming nuclear power is safe, it never will be.

Even if it were safe, each plant would take over a decade to build.

This means a nuclear strategy to replace fossil fuels would come too late to offset emissions. A just transition cannot be solely about retaining jobs, and it certainly should not be about creating jobs in a dangerous and dirty industry like nuclear power.

It must be about the ­transformation of the economy as a whole.

When the Fiddlers Ferry coal-fired power station in Cheshire was closed for good last year, workers were reported to have been redeployed to other SSE power stations.

The power plant’s closing could have been an opportunity for unions to fight for workers to be reemployed in green jobs.

But this opportunity was missed and there was no suggestion of a just transition by either GMB or Unite.

The Tories are indeed ­failing to provide enough investment into green jobs.

Britain only invests a quarter of what France spends on green infrastructure.

But some union leaders have used this as a justification to argue for ­maintaining the oil and gas industry, while developing nuclear power capabilities.

This compromise is a ­dangerous and defeatist one­ that fails to address the immediacy of the climate crisis.

Other union leaders that won’t wade into this argument are complicit.

Their silence allows right wing opinions to dominate and set the agenda. As always these debates often leave little room for what workers in the oil and gas industry think.

A poll conducted last year found that 51 percent of ­offshore oil and gas workers said they would be interested in working in the renewable industry.

Unions with members in the oil and gas industry must listen to these workers and offer them much more than continuing to climate chaos.

It was disappointing that there was little talk at the TUC of ­joining protests outside Cop26 in November.

Trade unionists ought to be leading the charge that could force the Tories to invest in green jobs.

But workers must go ­further. A truly just transition would transform every industry to preserve the environment, which is impossible under the current system.

Workers must look beyond the often limited thinking of trade union bureaucrats to implement the radical transformation needed to save us all from climate disaster.

The Laura Flanders Show: An Indigenous roadmap for a just transition