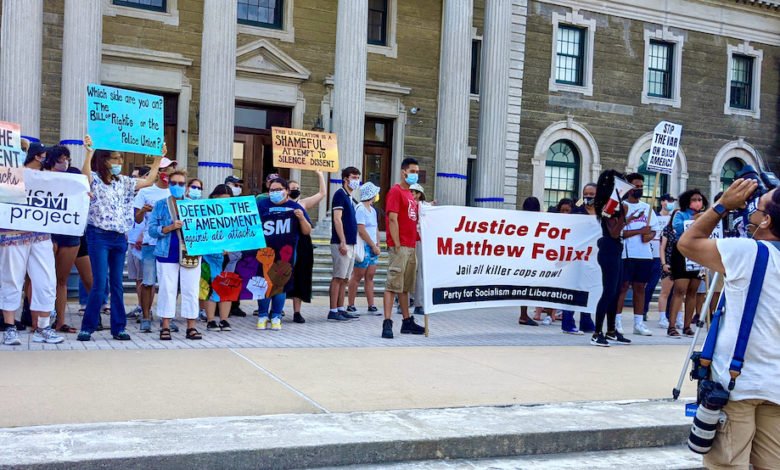 The rapid and organized response of Long Island, NY, residents stopped the Nassau County government from signing into law a bill that would allow police to sue protesters for up to $50,000.

The bill would have amended the current Nassau County Human Rights Law so that first responders, including police officers, would be classified as a “protected class.” The law was originally written to protect people of marginalized identities, making it illegal to discriminate against individuals on the basis of race, religion, sexual orientation, gender identity, or disability, among other categories.

This legislation would have added the occupation of “first responder” as a legal equivalent to these protected categories and allowed police officers to sue individuals in civil court for “harassment.” The language of the bill was ambiguous, but the implications were clear: police officers would have been handed another means to prevent protesters from taking to the streets. According to the bill, if any police officer believed that they were targeted for “harassment,” they could sue a protester or activist for up to $50,000.

The “first responders” terminology within the bill fooled no one. It is not firefighters or EMTs who have faced continued protests and criticisms against the brutality and systemic racism of their practices. The only profession that this bill was meant to protect was police, as if the police don’t already enjoy plenty of protections. Only the police can brutalize and kill with impunity without so much as losing their jobs.

‘The purpose of the bill is to intimidate us’

On Aug. 6, activists held an emergency action in front of the office of Nassau County Executive Laura Curran to demand that she veto the bill that had already been passed by the Nassau County Legislature a few days earlier and awaited her signature.

Speakers stated the implications of the bill in plain language: It was a fascistic measure intended to intimidate organizers and to make police even less accountable than they already are.

“It is insulting,” said Nia Adams of the Long Island Progressive Coalition. “It equates a career with the lived experiences of Black and Brown folks — of race, of gender, of sex, of religion … [We are here to] say ‘no’ to fascism and unchecked power … This is in direct retaliation of the uprisings that happened across the island, across the state, and across the country last year for Black lives.”

Other activists noted that this bill could also set a dangerous precedent, inspiring similar bills in other areas of the country, diminishing any possibility of police accountability nationwide.

“This is about tendering the language of the law to start planting the seeds for fascism,” explained Eden, an organizer with the PSL. “What we’re seeing here with this bill is bigger than Nassau County, it’s bigger than Long Island, it’s bigger than New York. This is a blueprint of what’s happening across the United States right now. It’s not a Democratic thing, it’s not a Republican thing. This is about people in power wielding their power in a way to make us afraid to gather and to speak.”

Samantha Felix, sister of Matthew Felix, a 19-year-old killed by Nassau County Police in February 2020 maintained, “The purpose of this bill is to intimidate us. And I’m here to say that I’m not scared and I will fight every day to get justice for Matthew.

“When I first heard about this bill I was enraged. We ask you to stop murdering our children, our brothers, our sisters, our mothers, our fathers, our friends. And this is how you respond? By doubling down and protecting the people who are murdering us? … What more protection do you need? You could murder someone today and clock back into work the very next day. Where is our protection?”

Speakers also pointed out that, even without the additional protections this bill would have enshrined, the Nassau County Police Department already had a track record of brutalizing citizens with impunity.

On Aug. 10, Curran vetoed the legislation to amend the Nassau County Human Rights Law. Under popular pressure, she conceded that “the law would intimidate free citizens from engaging in peaceful demonstrations without fear of retaliation.”

There is no doubt that the bill was defeated only because of the rapid and organized response of Long Island activists. But politicians on both sides of the aisle remain committed to enshrining greater privileges for a police force which is already not held accountable for its actions. The only hope to prevent these measures from passing into law is the continued mobilization and organization of all those who are committed to fighting for justice.