A Philosophy for Communism: Rethinking Althusser 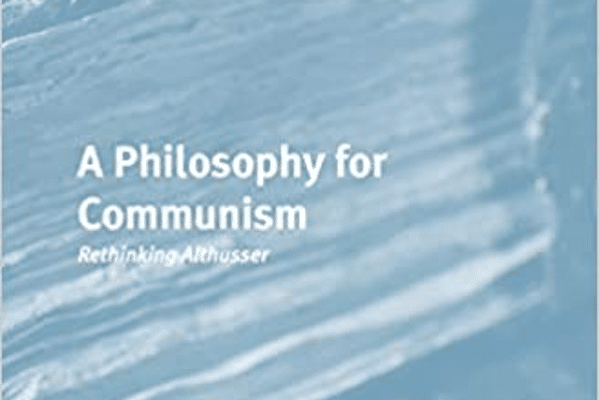 Launching a dramatic assault on both Stalinist doxa and Western Marxist pieties, Althusser shook the foundations of leftist thinking in the 1960s by rejecting the significance of Marx’s early, Feuerbachian, writings but also of any teleological conception of capitalism’s inevitable demise or supersession. He stressed the significance of (often overdetermined) structures and conjunctures, rather than ‘humanist illusions’ about subjectivity; and he reformulated notions of ideology so that they took better account of its largely non-conscious and non-intentional effect in the reproduction of capitalist relations.

Regardless of the initial effect of Althusser’s thought, there was a prompt and apparently justified backlash. The events of 1968 seemed to have left him blindsided; he retained a doomed, hopeless, faith in the French Communist Party; he was accused–increasingly frequently–of a ‘formalism’, ‘scientism’ and ‘theoreticism’ that weren’t up to the task of thinking political reality; and his relentless anti-humanism seemed to render agency entirely evacuated (and replaced by ‘utilitarian halitosis’). A few shards might have emerged from the ruins of murder and madness that characterized his final decade–regarding the significance of chance encounters, contingency and so on; yet, however suggestive these might seem, they provided only a kind of postmodern frisson and offered little by way of serious philosophical substance.

Anyone interested in Marx and philosophy who has subscribed to anything vaguely like the above two paragraphs should engage with Panagiotis Sotiris’s significant and timely book. Surveying the totality of Althusser’s writing, Sotiris aims to provide a properly materialist account of a great materialist thinker whose philosophy was forged in and by political encounters. This is no hagiography, and Sotiris has no problem confronting shortcomings, lacunae, and missed philosophical opportunities–especially, for him, in terms of Gramsci. But, overall, Sotiris’s book presents Althusser’s thought as a dynamic, developmental, engagement that remains a rich (although not necessarily programmatic) resource.

Part One covers an enormous range (as it probably has to) but could perhaps be summarized as providing the necessary philosophical foundation for the work Sotiris will carry out in Parts Two and Three. The core element of this foundation is the claim that–for all its internal tensions and self-critical incompleteness–Althusser’s thought demonstrates consistent concerns and even organic development. There is no great Turn, or Kehre, Sotiris insists (contra Negri); Althusser’s self-criticism is not so much renunciation but the necessary component of a communist philosophical practice alive to the contradictions of social reality itself. More specifically: we miss the dynamic subtlety of Althusser’s thinking if we assume that it ‘begins’, in the early 1960s, as a rather dogmatic, all-explaining, structuralism which soon finds itself inadequate to the singularity of particular historical conjunctures, and remains forever after trying to jump over its own shadow. Against such assumptions, Sotiris looks to provide a far broader genealogy that allows for a ‘thicker’ appreciation of Althusser.

He begins with Hegel. For sure, so much of Althusser’s critical and even polemical efforts were directed against an overly Hegelianized Marxism: for Althusser, teleology has to be discarded from history; contradiction should never be seen as the self- contradiction of some imagined Absolute; notions of ‘totality’ should give way to ‘over-determination’; and so on. Nonetheless, Sotiris insists, Althusser’s thought remained in a never-ending, and fecund, confrontation with Hegel’s (and thus with the Hegelian influence on Marx). The crucial point was that, contra Kant and his twentieth century phenomenological heirs, Hegel’s thought replaced ‘transcendental consciousness as condition’ with historical process as condition. How to comprehend and articulate this process remained fraught with massive issues; nonetheless, they also remained ‘indispensable elements in Althusser’s thought laboratory’ (35). Hegel was by no means a youthful flirtation.

In turn, Sotiris goes on to locate other important, genealogical, elements which all help to question, or at least destabilize, the notion of an ‘Althusser before Althusser’ and, instead, delineate a wider and more consistent development. The engagement with Montesquieu, for example, was not merely preparatory but formative: he provided Althusser with a non-teleological conception of history (rejecting ‘origins’ as much as ‘ends’); he stressed concrete singularities rather than abstract generalities; and he judged his own conjuncture immanently, rather than from some (putative) ideal viewing-point. Thus, long before addressing the tensions within his ‘own’ thought, Althusser was already confronting issues in Montesquieu which might seem to be a later confession of conceptual blind-spots–most importantly, how to identify wider ‘structural’ conditions while also rejecting finalism and highlighting singularity.

Likewise Rousseau: years before his final ruminations, Althusser was consistently engaged (from 1958, at least) with Rousseau’s analysis of chance encounters, outside of origin or end, that might–or might not–have lasting impact and effect. With Rousseau, it seems, necessity is rendered contingent–and so contingency becomes, in a (philosophical) sense, necessary. Reading Rousseau was thus in no sense incidental to the formation of a non-teleological and non-metaphysical materialism which would ‘conclude’ with such stress on the aleatory.

All told, this broader context–which also includes consideration of Pascal as thinker of chance (the wager) and of the materiality of ideology (believing by prayer rather than prayer as the expression of belief)–allows Sotiris to posit better known aspects of Althusser’s work as ongoing, developmental, concerns; it also allows him to go beyond the familiar historical horizon of Spinoza and Machiavelli. The Althusserian laboratory consistently investigated both broader structures and more particular conjunctures–and, of course, how these might relate to each other. Rather than treating this as evidence of a profound faultline which left Althusser vacillating over the supposed dualism of ‘essence’ versus ‘phenomena’, Sotiris’s wider frame allows for the construction of ‘a much more relational conception of social reality’ (71) that Althusser’s thought–seen in the round–might offer.

In Part Two, Sotiris turns to Althusser’s specific understanding, or understandings, of philosophy itself. Unsurprisingly, the section begins with treatment of well ventilated issues, like the status of theoretical practice, or the precise nature of the claimed ‘epistemological break’. But the bulk of Part Two is taken up with fairly detailed consideration of recently published works from the 1970s that are even less ‘canonical’, as it were, than Althusser’s last writings (like the 1982 ‘Underground Current’ essay). Concentrating on How to be a Marxist in Philosophy, which first appeared in French in 2015 and English in 2017, Sotiris suggests that Althusser develops ‘a new practice of philosophy, not another philosophical system’ (292). Indeed, the sharp focus on these 1970s writings acts as a pivot for Sotiris’s overall thesis: if Althusser’s last works, from the 1980s, are now recognized for an almost poetic speculation on the singularity of different encounters, it is these texts that provide much of their presuppositions and their preliminary articulations. Epistemological concerns and issues over scientific status fall away; what increasingly takes their place is stress on philosophy as the (partial) comprehension of events and encounters without ‘origin’ or ‘end’, and of ‘traces of communism’ within the cracks and folds of everyday living and thinking. As Sotiris puts it: ‘we have here philosophy as an attempt to intervene in a struggle where the major role is played by the masses, their initiatives, their aspirations and–last but not least–their thoughts, conceptions, and worldviews, which materialist philosophy attempts to discern, listen to, and elaborate as part of broader counter-hegemonic social and political movements’ (311).

What’s more, and as Part Three articulates more fully, there’s not simply a ‘political context’ to the changing shape of Althusser’s thought: his philosophical interventions so often presuppose a foundation in the debates and dynamics of the PCF, the French Communist Party (and beyond). The critique of humanism, to cite a particularly important example, is misrepresented unless viewed in terms of internal PCF disputes which themselves reflected deeper tensions within the wider communist project. Meanwhile, Althusser’s gradual movement from a more muted to a more strident left-wing critique of Stalinism is reflected in a gradual movement away from stressing the ultimate priority of general structures (latent or otherwise) over particular conjunctures. (Typically, though, Sotiris produces good evidence that, even in the early 1960s, Althusser already insisted on the primacy of the conjuncture–in all of its complexity–vis-à-vis political intervention.) Rather than focussing solely on capitalism, the work on reproduction from the late 1960s–part of which, of course, examines Ideological State Apparatuses–also needs to be seen as addressing failures in orthodox, Soviet-led, Communist thought: May 1968, and Maoism, more generally, underlined how revolution should be reconceived as a process rather than an ‘act’ (as Étienne Balibar, Althusser’s most important student, would suggest). What’s more, it also seems that so much of the more ‘fluid’ thinking that characterizes Althusser’s final decade can be located–to some extent–as emerging from his trenchant critique of Eurocommunism, in the 1970s. Althusser stressed–as a counter to any accommodation with bourgeois interests–that capitalist relations are founded, ultimately, on violence; but, at one and the same time, he expressed increasing disdain for a monolithic conception of the proletariat and of revolutionary struggle. The PCF was blind to the ‘crisis of immigrant workers’ and the changing complexion of the working class; leftist thought in general was blind to the ‘traces of communism’ that were all around, in localized struggles and initiatives, in pockets of non-commodified life.

Sotiris’s material location of Althusser’s thought leads him to conclude that ‘[i]f we try to simply project or articulate Althusser’s interventions, in their complex and uneven development, into a coherent strategy, we will soon realize that in this sense there can be no Althusserian politics.’ (523) But this is not quite the criticism, or even insult, that it might seem. Instead, it’s designed to emphasise Althusser’s thought as an ongoing engagement with its own conjunctures: we still have plenty to learn from Althusser; but we must remember, too, the extent to which Althusserian philosophy was an ongoing intervention with specific, changing, situations, rather than the production of timeless formulae.

One critical quibble that might be raised concerns the significance of Althusser’s Epicurus. Goshgarian has suggested that fuller engagement with Epicurean atomism may have prompted a kind of ‘conversion’ in Althusser–even a Kehre. Sotiris’s case for Althusser’s thought as organic and developmental–but not ‘ruptured’, as such–is convincing; but this particular issue needed fuller treatment (especially given the level of detail that other philosophical ‘sources’ are given, throughout).

Overall, however, Sotiris’s book is an important achievement–not least for thinking communism today. Althusser himself once declared that ‘we are always in exceptional situations’, but the current, viral, conjunction presents very particular characteristics: the largely unquestioned expansion of state surveillance, policing powers and ‘bio-security’; the deepest global recession since 1945 and the ever greater concentration of capital; but also the starkest possible reminders that fundamental social changes are not impossible and that only a properly global network of care can be fully efficacious. Sotiris’s reiteration of ‘the importance and necessity of philosophy as a distinct theoretical and political practice for any emancipatory political project’ (532) could hardly be more timely. We need all possible resources to help us ‘bend the stick to the other side’

Ian Leask is a lecturer in philosophy in the School of Theology, Philosophy, and Music, Dublin City University. He has published widely in the history of philosophy and in aspects of contemporary European philosophy.[email protected]

The necessity for a transition…to communism

Realism, idealism, and the deradicalization of Critical Race Theory—Rethinking The CRT Debate, Part 2

The Philosophy of Money with Graham Hubbs