A picture of class struggle and resistance: The story of Mukuru demolitions 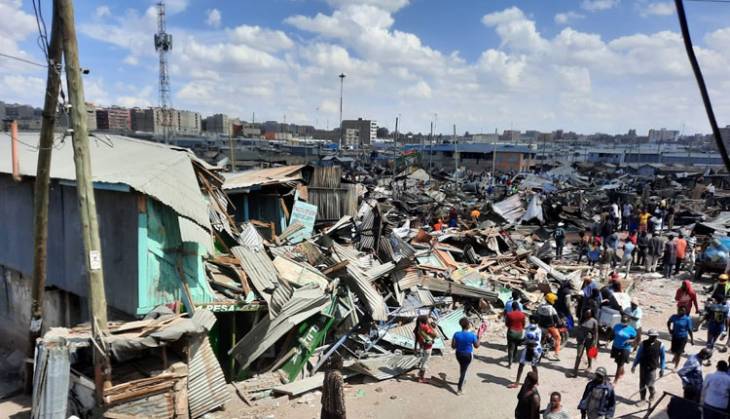 On May 30th 2018, President Uhuru Kenyatta pledged to issue 100,000 title deeds to Embakasi residents at Jacaranda Grounds. In May 2019, the former Nairobi Governor Mike Sonko halted the process for 50,000 plot owners. He reportedly did this to pave way for investigations to find out who the genuine land owners in the area were after a land dispute between residents of Mukuru kwa Njenga and land dealers. As of August 2020, only 2,100 title deeds had been issued. In October 2012, demolitions began in Mukuru kwa Njenga to build the Nairobi Expressway. Officers from the General Service Unit drove demolition trucks. Hordes of policemen and hired goons destroyed homes, businesses, schools, and displaced over 75,000 individuals.

Residents of the area were caught flat-footed in the ensuing demolitions; they were neither given notice nor compensation. A young man died while trying to escape from his house. He was buried under the rubble. At Vision Grounds where the internally displaced took shelter, a young mother gave birth in the cold and open ground. Her baby died the following day. The justification for this senseless and inhumane act is the construction of the Nairobi Expressway. This project which will provide direct access to Jomo Kenyatta International Airport from Uhuru Highway is proposed to shorten the commute to the airport. It will be a toll road. The road is financed by illegal debt as the project was not subject to public participation, a constitutional requirement. Furthermore, the road has led to an ecological crisis where years old trees have been cut down on Uhuru Highway, Kenyatta Avenue, Mombasa Road, and Langata Road. Although the government has denied it, given the timing it seems that Uhuru Park, a public park, has been cordoned off to create room for construction of the expressway. People have no green spaces to relax.

The story of the demolitions hasn’t received adequate airtime on mainstream media. Any form of coverage of the evictions is banned. When citizen journalists are found on-site, their phones are taken away by police and crushed under the demolition trucks. This is what I was told was happening by residents of Mukuru affected by the evictions.

This is the story of the struggle and resistance of four residents who called Mukuru home.

Mino Kyaa: “I have lived in Mukuru for 25 years. I thought this would be my home forever. The demolitions began on 10th October. Two days earlier, on 8th October, contractors came and marked the main road for expansion. We weren’t aware that they would be coming as there was no notice. Mukuru doesn’t have electricity. Those carrying out the demolition said that the announcement was made on TV that the government would begin construction of the Express Way and feeder roads. How were we to know? There was no special planning meeting or community forum about this. When the demolitions started, the youth in the community protested continuously for two days. On the third day, the police descended on us with four large water trucks and we were brutally beaten up. The water that was sprayed on us made us itch like crazy. This place became a war zone.

Around the mosque area, the contractors destroyed a lot of personal property because the demolitions took place when most people were at work.

The demolitions were happening in a rogue manner because it wasn’t immediately clear where the road would pass since it wasn’t marked. We would hear the contractors and police asking themselves if a particular place was to be demolished before carrying out the task.

Rent prices have shot up in the neighbouring Pipeline Area by an average of Kshs1,500 for single rooms that were going previously renting for Kshs 3,500. In Imara Daima, the rent is unaffordable for most of the Mukuru residents beginning at Ksh. 9,500 for a bedsitter. In the slum, a rented shack for Kshs 2,500 was adequate for a family of three. The house we lived in was enough to house my parents, my cousin and I. Everyone had their own room. I had to move my parents into a one-bedroom house that costs Ksh.13,000. The house is not big enough to fit the four of us so my cousin and I had to find different places to live. I have moved five times in two weeks.

The demolitions have disrupted our social lives. Because most of us have lived here for so long, it is going to be difficult to uproot ourselves and move to new neighbourhoods. As an organizer, one feels helpless to the demolitions because the community looks up to you to defend them against such injustices. In the morning and evening, my friends and I gather to share ‘Chakula ya Mbogi’ (food for the group). That is how we are trying to look out for each other. We also inform each other of agreeable landlords and affordable houses that are vacant and aren’t in danger of demolition.”

‘Chinku’ narrates, ‘’At Vision grounds, where there was a make-shift camp for the internally displaced, the area chief gave the residents a three-hour eviction notice. The media isn’t allowed access to provide coverage. At Sisal, it took a day for 30,000 people to be homeless. The demolitions occurred over the weekend from Thursday through Sunday. The contractors use surprise tactics. It is very difficult to predict when your home will be next because they can be demolishing one area and the next thing you know, they have relocated to a different facility at random. We are angry because we were betrayed by the village elders. They were promised plots of land in exchange for signing consent forms saying that we, the residents had agreed to the expressway and the feeder roads to pass through this area. That we had agreed to the demolitions. We, the residents did not consent to such a thing. It is rumored that the elders have also been betrayed by those who promised them land. They will not be getting any plots.

The planning itself did not make sense. On the day of the demolitions, 24 of the elders were escorted by the police into the slum to ‘map’ out the area where the road would pass through. Some of the elders were dressed as GSU officers and carried batons. After every 4 plots, which is a distance of about 100 metres, they delineated a feeder road and marked the place for demolition. The demolishers left hanging structures which collapsed and injured some people and killed a young man.

The area MP blocked the Red Cross from providing relief such as blankets and food. He dissuaded them by telling them that he had already relocated the displaced.

We resisted the demolitions by protesting. We fought the police all day long. The following day the chief and security forces announced that there would be a community dialogue to straighten things out. It turned out to be an intimidation tactic. No dialogue took place. We were threatened the entire time. On the third day of our protest, the police came with fierce dogs.’’

Almasi who has lived in Mukuru for 12 years says, “These demolitions are illegal. They contravene the Land Amendment Act 152 (d) which states that adequate notice should be given and those carrying out the demolitions should have IDs. None of the contractors identified themselves. They are therefore criminals. The chief wants to give us Ksh. 2,000 compensation so that we can go back to the rural areas. The land which we settled on is said to have been leased to Chandaria. When that lease expired in 1998, it was given to Uhuru. Uhuru said that we, the residents are pigs reared by Chandaria and not people.

That is why they are stealing poor people’s land. They are stealing our hope. We were promised jobs by the Uhuru government. We have no jobs. When the rate of unemployment forces us into crime, we are killed. They want us to become criminals so that they can kill us. In Embakasi, there is only one public high school – Embakasi Girls’ and three public primary schools. Out of the three, two of them are run by Marianists. Only Kwa Njenga Primary School is fully run by the government. We depended on small private schools in the slum that are cheap to educate our children. These have been demolished too.”

Mish adds that business owners have lost their sources of livelihood. One popular spot that had many changaa sellers is now currently under construction for apartments. ‘’There is a high rate of depression among the elderly,’’ Mish says, ‘’most of them had receded from the workforce. Now they have no home. What are they supposed to do? The majority are too old to keep up with the high amount of energy required to work on the factory floor.’’

According to Almasi’s documentation, five elderly and two children have died because of being exposed to the cold outside. ‘’We have become refuges in our own country. The only way to stop this is through a revolution. There are private companies such as Bachu that have profited from scrap metal from the demolished houses. Scrap metal dealers collect the scrap at Kshs 15/Kg and sell it to Bachu at Kshs 30/Kg.”

Forms of resistance to the demolitions include a statement issued by Revolutionary Socialist League (RSL) condemning the evictions. A twitter storm was also organized by Mukuru youth under the #endmukuruevictions. Muungano wa Wanavijiji mobilized Mukuru residents to present a petition to the Land and Housing Ministry.

*Lena Anyuolo is a writer and an organizer based in Nairobi.

The origins of Christmas and the class struggle

In “Time for Socialism,” Picketty overlooks the class struggle

[Leaflet] Fight and Win Against the Starbucks Bosses Through Class Struggle!