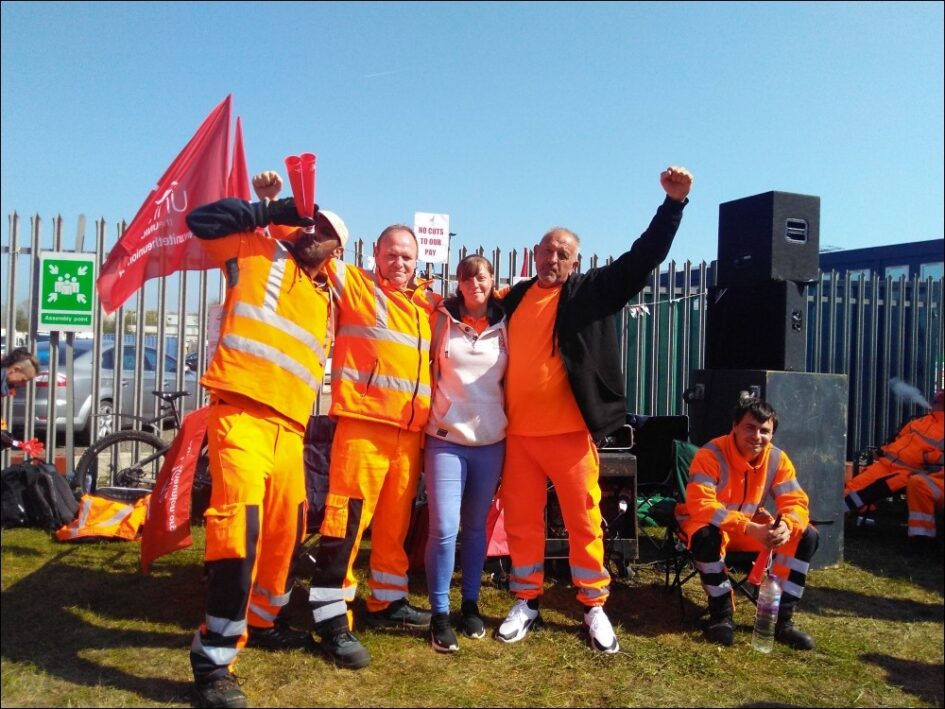 Editorial of the Socialist issue 1146 It’s an ideal opportunity for her to send a clear message to both the employers and their crisis-ridden Tory government that their brutal offensive, designed to make workers pay for the Covid crisis, will be met by fierce resistance from the labour and trade union movement.

Already, in the short time following Sharon’s election victory, her strategy to get Unite ‘battle-ready’ has seen the right-wing press alter their views on her leadership. Initially, they, and New Labour leader Sir Keir Starmer, clung to hopes that her election could strengthen the right politically. But her position of ‘no blank cheques’ for Labour is now seen by them as a fighting not a passive position.

The Economist predicts: “Under Ms Graham’s leadership, strikes will probably become more common”, and the viciously anti-union Daily Mail reported: “Labour distances itself from new Unite leader after it emerges she once vowed to break the law in fight for workers’ rights”.

Sharon made this declaration in her speech at the 2019 National Shop Stewards Network (NSSN) Conference. On Sunday 12 September (see ad opposite), she is addressing the online NSSN Rally, that for the 12th successive year will lobby the TUC for the fighting programme that is needed for the trade unions.

Sharon won the Unite election because she was seen by members as the most combative candidate and the most likely to be able to stand up to the bosses’ attacks.

This was the lesson drawn by those who have had to fight for workplace safety during Covid, and defend their livelihoods against attacks such as the vicious ‘fire and rehire’ (estimated by Unite to have affected 10% of workers) and the growing wave of union victimisation.

This was why workers who have fought and defeated their bosses this year were attracted to Sharon’s campaign: the construction electricians, for example, who stopped deskilling after months of protests, culminating in the blockade of the Atomic Weapons Establishment; the Manchester bus drivers who defeated fire and rehire after 85 days of strike action; and the Thurrock binworkers who faced down their Tory council with a six-week stoppage.

The pandemic has also seen the right wing in Unison defeated in the elections for the national executive council. Among the left candidates elected were four Socialist Party members. In NIPSA, the largest public sector union in Northern Ireland, Carmel Gates, a member of the Socialist Party’s sister organisation Militant Left, has been elected general secretary. These welcome developments open the door to forging a fighting ‘coalition of the willing’ across the unions.

The TUC Congress may be constricted because it is online, but it should still be a balance sheet of how the unions, and especially their leaders, have acted during Covid.

An honest accounting, acknowledging mistakes, is the most effective way to prepare for the impending struggles. This is totally missing from the Congress motions, but is in tune with how the union leaders responded to the pandemic. Only two motions and one amendment mention industrial action!

Even unions which had previously had fighting records retreated during the pandemic. PCS general secretary Mark Serwotka, for example, parked the union’s full national pay claim before its NEC lay leadership had met.

However, the union leaders are forced to be far more responsive to pressure from below than the heads of the TUC and Starmer’s Labour Party.

As the bosses stepped up their attacks from last summer, there was a rash of disputes. At the same time as Unite was taking on British Airways’ (BA) fire-and-rehire offensive, BA was shamefully joined by Tower Hamlets Labour council, provoking strikes by Unison.

Even the right-wing union leaders in retail union Usdaw have been forced to sanction three strikes because of their members’ anger at the employers’ attacks.

Over the last year there has been a real growth in disputes, many of them long-lasting and increasingly indefinite.

In some respects, the Tories’ own anti-union laws have had the opposite effect to that desired by them, convincing workers that they might as well ‘go for it’ from the start given the new undemocratic voting thresholds, and because they have to reballot after six months.

Workers have also drawn some lessons from the last decade of the brutal character of the bosses’ attacks. From the strike of British Gas engineers, for example, who faced pay cuts of over £10,000 year: individual days of strikes are ineffective if they are left as isolated action rather than quickly escalated.

These disputes, with a number winning important concessions and some outright victories, form the real balance sheet of the last 18 months, and the lessons must be taken on by the leading layer of trade union reps and activists.

This is even more necessary as we emerge from lockdown. The bosses’ offensive could still be the advanced warning of far more brutal attacks to come on jobs, pay, pensions, and terms and conditions.

To a certain extent, they and the Tories have postponed a face-off with workers as Johnson and his government have been forced to intervene on an unprecedented scale, through measures such as furlough, to stave off a total collapse of the economy and the huge welling up of anger of the working class.

A glimpse of this mood was seen in the huge Black Lives Matter mobilisations last summer, after the racist killing of George Floyd by US police, this year’s protests over the murder of Sarah Everard by an off-duty police officer, and the two London demonstrations of over 100,000 against the Israeli state’s attacks on the Palestinian people.

This has also found a distorted expression in the confused outpouring of the anti-vax demonstrations, with far-right forces undoubtedly trying to exploit the anti-establishment hatred of those involved.

The social and political vacuum that has been created is to a certain extent the responsibility of the trade union leaders, who have failed to give a fighting industrial and political lead. If they were to do so, including understanding the necessity of breaking with Starmer’s Labour and building a new mass party of workers, this could act as a pole of attraction to those rebelling against inequality, injustice and oppression.

They could show that the Tory assault on democratic rights, enshrined in their new policing bill, is primarily a class attack. Before and after Christmas, police in first Yorkshire and then Scotland dispersed legal picket lines of striking workers, falsely using Covid regulations to justify it. They used the same premise to try and break up a Manchester protest of NHS workers against the Tory pay freeze in Manchester, outrageously arresting a Unison NEC member.

Above all, it is the taking of action, and on the biggest scale possible, that will put the stamp of the workers’ and trade union movement on these events.

A decade ago, TUC Congress became a ‘council of war’, coordinating strike ballots across 29 public sector unions against the attack on pensions by the Tory-led coalition government. That resulted in the historic N30 two million-strong walkout that was effectively a public sector general strike.

Forced into action by members’ pressure, and levered by the NSSN and left unions, the right-wing union leaders moved to call off further strikes before they could be escalated.

This sell-out opened up a decade of austerity and the pay cuts that are now creating a furious mood against the Tories’ current pay insults to public sector workers.

TUC Congress takes place as members of NHS unions are voting on the Tories’ measly 3% pay offer, while teachers return to schools with exactly nothing on the table, and other public sector workers protest against below-inflation pay rises.

This TUC Congress must be a decisive meeting to discuss and set out the action that is needed to force back the Tories on pay and cuts, linking up with workers in the private sector in a united struggle to push back against the employers’ onslaught.

If this isn’t done, those unions which are up for the fight must come together to give a lead for the action that is needed.