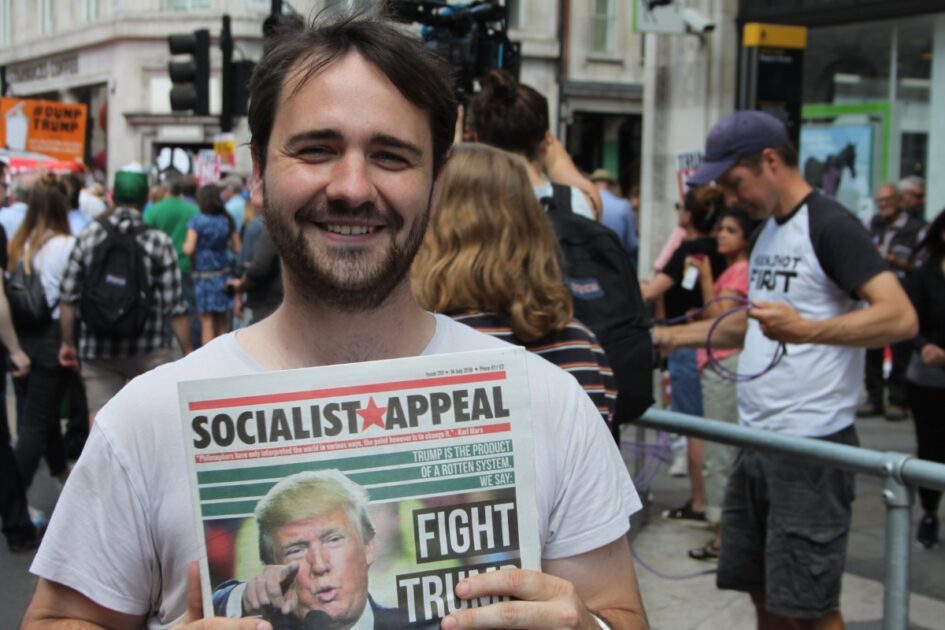 Thank you for your letter dated 13 August, in which you threaten me with Automatic Exclusion from Membership of the Labour Party if I do not comply with a series of conditions within seven days.

On reading your letter, a famous work of literature immediately came into my mind: George Orwell’s 1984. I suppose you have read it? Or at least seen the film. If not, I recommend it to you, as it has many important lessons – and more importantly, serious warnings.

The conditions in your letter are so ridiculous that they would be laughable, if the implications were not so serious. They are of an entirely undemocratic and arbitrary character; and, if they are accepted as standard procedure, they would inevitably lead to the wholesale expulsion of members of the Labour Party whose views are inimical to the present leadership.

It is furthermore quite clear from what you write that such expulsions can be carried out without any proper democratic enquiry, debate, or scrutiny against any party member, irrespective of whether he or she is connected in any way with Socialist Appeal.

This is a thinly disguised attack against the Labour Party rank and file in general, and the left in particular; a continuation of the witch-hunt that has been launched by the right wing under the leadership of Sir Keir Starmer, egged on by the howling of the Tory media.

It is alleged that Socialist Appeal is opposed to Labour’s traditional values. But what are those values? As far as I recall, they were always the values of democratic socialism. Socialist Appeal certainly stands for socialism, which is democratic by its very nature. But where do Sir Keir Starmer and his friends stand on these questions?

Starmer does not stand for socialism – whether democratic or any other sort. He stands for capitalism and wants the Labour Party to be seen as the friend of big business, the bankers, and the fat cats of the City of London. He does not disguise his pro-business leanings. He openly proclaimed them in a recent speech, in which he said that Labour should go back to the ideas of Tony Blair. That says all that needs to be said.

So much for Starmer’s attitude to socialism. But what about democracy? They say that charity begins at home. If Starmer agrees with democracy, that ought to be reflected in the way he runs his own party. But just look at his record!

To begin with, Starmer was elected under false pretences, claiming to stand for unity and continuing the policies of Jeremy Corbyn. That was a lie. Instead, he has moved sharply to the right, embraced big business, and has become virtually indistinguishable from the Tories.

Far from regenerating the Labour Party, Starmer’s leadership is destroying it. Instead of uniting it, he has split the party from top to bottom. Thousands of loyal party members are threatened with expulsion for the slightest criticism of the leadership. Local parties are being closed down by bureaucratic fiat.

The bureaucracy has essentially closed down the party and abolished internal democracy. Even the slightest hint of criticism or dissent is crushed. As a result, over a hundred thousand members have left in disgust. The party is on the verge of financial bankruptcy, and some trade unions are threatening to disaffiliate.

As an indication of how these people understand democracy, just look at my case. The specific charges against me include such things as:

As you will no doubt be well aware, this kind of thing is known as guilt by association. It was a tactic that was used in the United States during the period of the notorious McCarthyite witch-hunt, when many people were accused of being members of the Communist Party on the basis of such trumped-up charges.

May I point out to you that on the basis of such ‘evidence’, many members of the Labour Party could be subjected to Automatic Exclusion from Membership, including well-known trade union leaders and members of the Parliamentary Labour Party. I have just heard that Ken Loach, the world famous film director, has been expelled. Where is this going to end up?

‘I am proud to stand with the good friends and comrades victimised by the purge. There is indeed a witch hunt….’ KL

This is manifestly false on several counts.

The Socialist Appeal, as you well know, is a paper published by Labour Party members and trade unionists. In order to produce, finance, and distribute a newspaper, a degree of organisation is, of course, necessary. This is no secret.

But to claim that Socialist Appeal has supported candidates of other parties against official candidates is a palpable lie, which can be easily disproved by the facts. Indeed, supporters of Socialist Appeal have consistently been in the forefront of the fight against the Tories, and to get Labour elected.

The same is certainly not true of the right wing in the Parliamentary Labour Party and a number of unelected party officials who organised a scandalous campaign to discredit and oust Jeremy Corbyn, and who actively conspired to bring about the defeat of the Labour Party in the 2017 and 2019 general elections.

This fact was exposed by the leaked report at the beginning of 2020. Yet to this day, no action has been taken against those who organised the sabotage of Labour’s election campaign. They continue to occupy comfortable and well-paid positions in the party apparatus, from which they are continuing their campaign of sabotage, by systematically witch-hunting the left. Why have you picked on Socialist Appeal for the McCarthyite treatment? Why were organisations like Progress and Labour First not proscribed?

In fact, there is a web of right-wing organisations – from Labour Together, to Labour Tomorrow, Saving Labour, Movement for Change, Remain Labour, and Labour Network – which receive substantial sums from big business, a number with links to Israel and Saudi Arabia.

They are not touched, as these are right-wing Blairite outfits that are in full agreement with the present line of the leadership. So that is OK, then.

But why, for example, was Momentum not targeted? It has an organisation, which is considerably larger and better known than Socialist Appeal, yet you are silent about it.

Can it be because the leadership of Momentum have shied away from an all-out fight against the Starmer leadership, preferring to ‘play it long’? Or perhaps because it has shown a lukewarm response to the present purge? Perhaps the leaders of Momentum calculate that, by keeping their heads down, they may save themselves? If so, that is a vain hope.

Let us be clear. The attack on Socialist Appeal is the thin end of the wedge. The right wing correctly see Socialist Appeal as the most determined and intransigent section of the left; and by eliminating us, they hope to castrate the left in general. But appetite comes with eating. Today it is Socialist Appeal, together with three other groups; tomorrow it will be Momentum and every other left grouping. The right wing, unlike the Momentum leadership, is prepared to go to the very end.

The threatening letter which you just sent me is merely a small part of this campaign, which is actively destroying the Labour Party at rank-and-file level. Eighteen months after the election of Starmer, the party finds itself in a lamentable state.

On the electoral plane, the party has staggered from one defeat to another. All the opinion polls show that Keir Starmer is deeply unpopular both with the party members and the public at large. What conclusion do the PLP and the party bureaucrats draw from this catastrophe? Only that we need to plunge even deeper into the mire. It is in this context that we need to see the attack on Socialist Appeal. It has been the sharpest in its criticism of the present leadership. It led the campaign to present a vote of no confidence in Starmer at the party conference this autumn; and to bring about a change in the rules to oblige him to resign should he lose a vote of confidence, opening the way to the election of a new leader.

There can be no doubt that this – AND THIS ALONE – is why Starmer and his clique aim to silence the Marxist tendency by bureaucratic means. But they will not succeed. Socialist Appeal will never be silenced. And nor will I, and many thousands of honest party members who are appalled by the way in which Labour is being dragged ever further to the right by the leading cabal.

Instead of fighting Johnson and the Tories, they spend all their energies fighting the left. Instead of overthrowing this rotten and corrupt government, they are hell bent on destroying the Labour Party. As a result, one cannot speak of an opposition in Britain today.

When it comes to attacking his own party, Starmer plays the Big Man, wielding the axe with gusto, and duly received the plaudits of the Tory press. But when it comes to attacking the Tory government, he is like a frightened rabbit, dazzled by the headlights of a car. He does a tolerable imitation of The Invisible Man. No wonder the voters are turning away from Labour in droves!

Over the recent period the right wing has trampled over the traditional democratic and socialist values of the Labour Party, and in the process is ruining it.

And so, you will understand why I cannot accept your letter. I will not surrender to blackmail, threats, and bullying. Nor will I give up my fight for socialism and for the transformation of the Labour Party.

It is, of course, in your power to produce a bit of paper announcing my expulsion. But it is not in your power – or anyone else’s – to separate Marxism from the labour movement. We will continue our work, and no bureaucratic chicanery will stop us.

In the last analysis, the capitalist policies and Stalinist-Orwellian methods embraced so enthusiastically by Starmer and the right wing will blow up in their faces. The ideas of Marxism will prevail. And he who laughs last, laughs best.

I look forward to your reply.