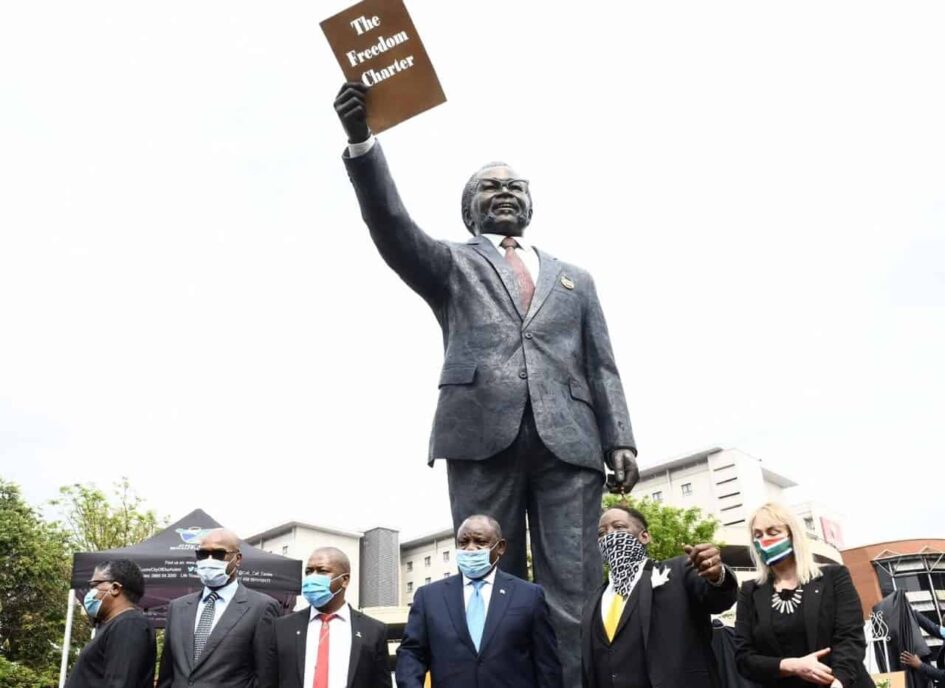 South Africa’s ruling African National Congress (ANC) government is exhibiting the past in the present by forging narratives, images, metaphors and symbols to create a specific perspective. The purpose of that perspective is to make sense of the past in ways that render their actions in the present more plausible. They sanction struggle or liberation history to produce what Adam Ashforth has called “a scheme of legitimation”.

In 2020, they did it with the ‘public’ statue of OR Tambo and this year, 2021, it is the ‘Year of Charlotte Maxeke’ narrative. Tambo, as valuable as he was in the South African liberation struggle, does not deserve an additional expensive statue from the taxpayers’ purse as unveiled at Ekurhuleni last year. The latter (Mama Charlotte nee Manye Maxeke, 1871-1939), the 20th-century African nationalist, theoretician, feminist or ‘native woman’ activist and member of the Bantu Women’s League, does not singularly deserve a whole year of celebration that uses public resources. There are other women in the liberation struggle who deserve to be celebrated in their own right, not as footnotes to her. Be that as it may, my gripe is not entirely about the expense involved in curating and unveiling these statues and symbols; it is more about the curation of public memory and heritage in post-1994 South Africa.

The Charlotte Maxeke narrative, as with the OR Tambo statue celebrated as liberation ‘heritage’ commemorative actions of today, come after 1994, when government-sponsored struggle history became a dominant historiographical trend in South Africa. This trend relies upon and is fixed on a specific perspective— a dominant or triumphalist perspective by the ANC, and which presents contemporary liberation history as a dichotomy between those who were on the ‘right side’ and those who were not. The ‘right’ side is that of the Freedom Charter and anything else is regarded as the ‘wrong’ side. It is an abuse of any history that overtly declares itself as a truly South African liberation project by drawing in as many people as possible to develop a truly national character.

The unveiling of 2021 as the ‘Year of Charlotte Maxeke’, as with the unveiling of the bronze colossus statue of OR Tamboin Ekurhuleni, demonstrates again that the state apparatus is again being manipulated to harness the dominance of the ruling party. This neglects and undermines the contribution of other liberation movements and people to influence post-apartheid public memory. These two instances confirm a continuous political hegemonic narrative of the liberation project for party political ends; if it were not the case, why place ANC insignia on a ‘public’ heritage or present Mama Maxeke celebrations within the ANC political ‘province’ of ‘unity, renewal and reconstruction’?  This politics of memory desires to protect and inspire a narrative and a ‘moral excellence’ of the ruling party against the radical postulations and decolonisation stances of the Pan Africanist Congress of Azania (PAC), Black Consciousness Movement of Azania (BCM) and Azanian People Organisation (AZAPO).

During the OR Tambo statue unveiling, the South African President stated, ‘to the world, OR Tambo was the voice of South Africa’s liberation movement because he articulated the aspirations of every South African man, woman and child who yearned for freedom’,  and because of this, Ramaphosa added ‘he deserves such a symbol of our triumph as a nation over injustice’. In April 2021, in an ANC rally, Ramaphosa stated: ‘Charlotte Maxeke was an outstanding leader, we cannot talk about the history of South Africa without talking about her contribution’. These are beautiful and moving tributes to Mama Charlotte Makgomo Mannya Maxeke and Tata Oliver Reginald Kaizana Tambo. Such an acknowledgement to persons who were the voices of the liberation struggle in the world during the monstrous time in the history of South Africa is highly valued, but why not do it across the political spectrum? It is because of the politics of memory and the abuse of liberation struggle history.

If it were not true, South African society would know that the PAC’s duo David Sibeko and Edwin L Makoti managed to get the apartheid South African regime expelled from the United Nations General Assembly in November 1974. They would know that Mama Zondeni Sobukwe, Mama Komikie Gumede and Mama Nomvo Booi were outstanding leaders who made a central contribution to South African liberation history. These Africanist women, like Maxeke, are ‘true embodiments of African womanhood’. They made intellectual contributions about the place of African women and broader  issues in South Africa from the 1960s.

What I seek to highlight is that the voices of the liberation struggle in the world were not solitary affiliates of the Charterists, as is being depicted today. They also emanated from other ideo-political persuasions, for example, the PAC and BCM-A. The curation of public memory after 1994, as it has reflected time and time again, including the recent unveilings, has proved that when Mr Cyril Ramaphosa and ANC officials say we ‘telling the world that we have not forgotten our heroes’, ‘our heroes’ to them implies Charterists and nobody else.

The master narrative of liberation history that has encapsulated contemporary South Africa’s historiography, subsumes and frames other experiences into a homogeneous collective memory that dictates public history should fall in line with the ANC’s idea of national identity. Such abuse of history intertwined with politics of memory is surely not sustainable, and the slumber created by the homogeneous public memory is surely a dangerous work. Look what happened to the Cecil John Rhodes statue at the University of Cape Town in 2015.

On paper, we know that the National Heritage Act (NHA) promotes the democratisation of heritage, history, human dignity, remembrance, and national unity – but practically, one narrative is preserved, as we see with the examples cited. If the ruling party were so confident about its liberation struggle credentials, why do they not allow for the promotion of other liberation heroines such as Hilda Mngaza, Nomvo Booi, Neo Chepape, Zubeida ‘Juby’ Mayet, Lauretta Ngcobo and Zondeni Sobukwe? If the country is existing under democratic rule, why not democratise the liberation struggle’s history?

The commemoration of the 150th birthday anniversary of Charlotte Maxeke and the celebration of Oliver Tambo have little to do with public interest, but everything to do with entrenching the ANC’s credentials in our public and collective memory. It is just a scheme of legitimation, considering that memory is a powerful weapon. South Africa’s ruling government is abusing liberation history to coerce the public towards a homogeneous society crafted by itself.