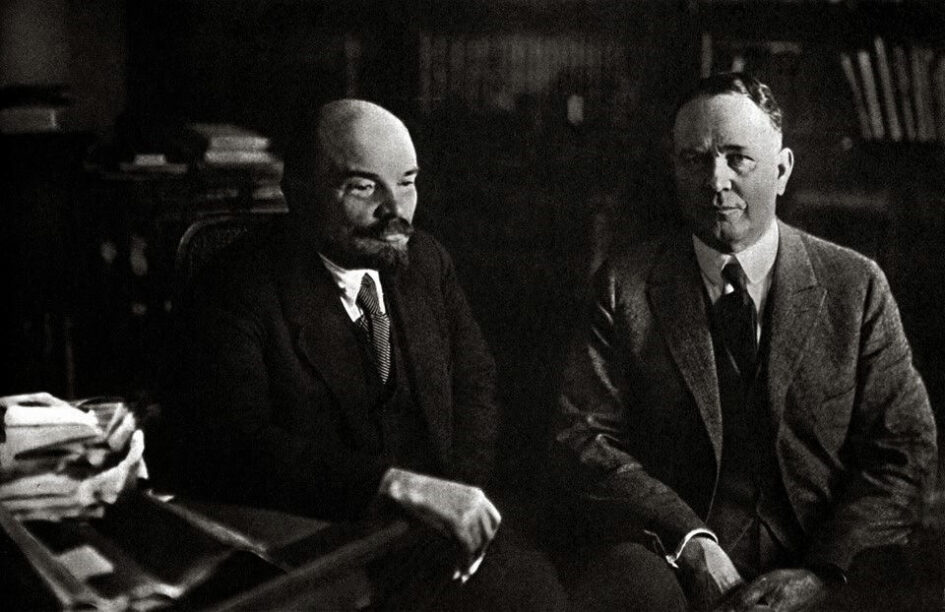 An account of the visit of progressive American economist and former presidential candidate Parley Christensen to meet Lenin in Moscow, 1921. 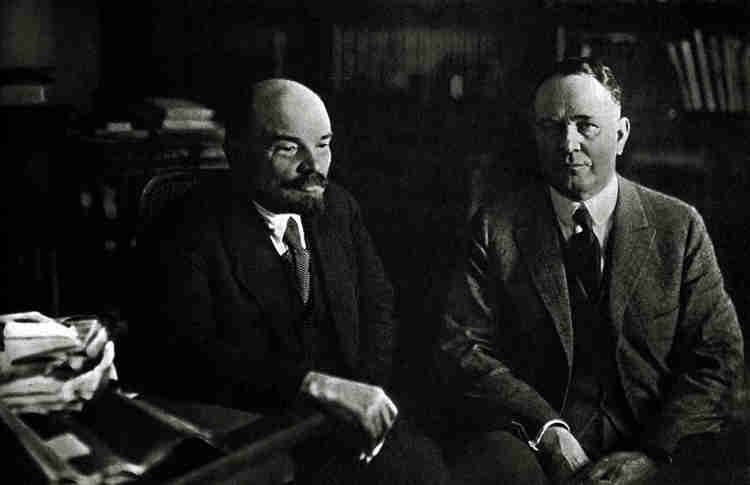 Published in the Soviet press in 1968, an interesting account of the visit of progressive American economist and former presidential candidate (Farmer-Labor Party) Parley Christensen to Soviet Russia in November, 1921 and his meeting with Lenin.

This still from a film shows Lenin saying good-by to American economist Parley P. Christensen after a talk in the Kremlin. 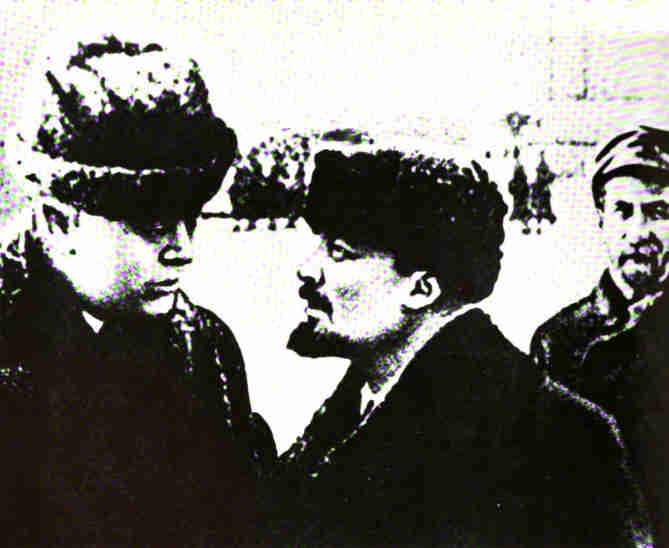 Christensen was the candidate of the Farmer-Labor Party for President of the United States in the 1920 elections. The platform of the newly formed party, which took a radical stand on a number of issues, called for de jure recognition and trade relations with Soviet Russia.

In August of the same year the Congress of the British Labor Party came out in defense of the Soviet Republic. The Lloyd George government, actively backing the White Poles, was preparing to intervene militarily. The Labor Congress set up a Committee of Action empowered to call a general strike should that be necessary.

When this news reached the United States, Christensen cabled London on behalf of his party, calling the initiative of the British workers a model of proletarian solidarity. Several months later, when President Woodrow Wilson approved the deportation of Soviet representative Ludwig Martens, Christensen sent an open letter of protest to the President. The letter pointed out that audiences Christensen had addressed in the country’s major cities during the election campaign had reacted with unanimous sympathy to any mention of the Soviet Union. The deportation of the Soviet representative on orders from the President, the letter went on to say, therefore did not reflect the attitude of the American people to Soviet Russia.

At the end of their talk, Christensen asked Lenin to pose with him for a photograph. Lenin agreed, we know from the memoirs of Boris Reinstein, representative of the People’s Commissariat for Foreign Affairs, who was present, but asked for a return favor, “a more active collection of money from rank-and-file American farmers to aid the starving peasants of Russia. Is it a deal?”

“I accept your proposal,” Christensen replied.

A real American, Reinstein continues, Christensen got down to business at once. That same evening he sent a long cable to Washington to his friend Senator Ladd of North Dakota. “The famine in Russia,” he wrote, “is becoming more desperate every day. Not only food but also wheat seed for the spring sowing are urgently needed. Our American farmers have the wheat. The Russians have all kinds of raw materials. Why not trade directly?”

Several years ago, Albert Rhys Williams, a great friend of the Soviet Union, persuaded Andrew Steiner, commentator on international affairs, to comb the American press for reports of talks Lenin had with American visitors during the first Soviet years. Among the discoveries was a hitherto unknown account given by Christensen of his conversation with Lenin in 1921, when the Soviet leader told him that “Russia is prepared to enter into business relations with America,” and asked what the American objections were. “As far as we are concerned,” Lenin declared, “nothing stands in the way.”

Cameraman Alexander Levitsky, who shot a film of the meeting, added these details: “At the appointed time,” he wrote, “a tall burly man carrying a huge briefcase entered the hall. With the American was a thin middle-aged man below medium height, who seemed to be a Foreign Office man or an interpreter. Nadezhda Krupskaya, Lenin’s wife, ushered the two into Lenin’s office. She soon came out and called Pyotr Voevodin, head of the film and photo department. Shortly afterward, the latter looked out and asked me to come in with my camera. I did and, after saying ‘Good day’, stopped uncertainly near the door. Comrade Lenin returned my greeting and invited me to set up my camera and go ahead, adding that I would not be in the way at all. He then resumed his talk with Christensen. During a pause, while Christensen was looking for a paper in his bag, Voevodin asked Lenin for permission to photograph them.”

The light in the office was poor but a while later, when Lenin came to the doorway to see Christensen off, the cameraman shot several feet of film. The film was developed almost immediately and brought to the Kremlin next morning, together with the photographs. Unfortunately most of the film was lost later.

Why was Lenin’s body mummified? Who decided it?