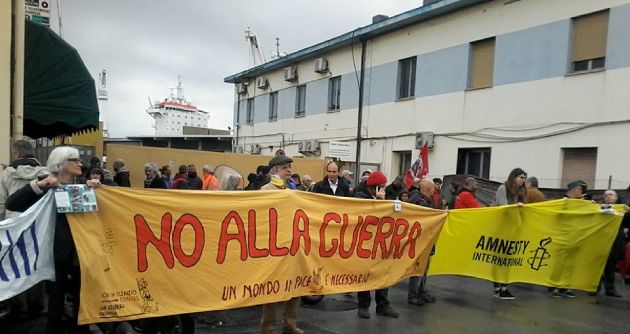 Port workers in Italy are refusing to bloody their hands for wars they don’t support – from Yemen to Gaza, and their resistance is inspiring others. Futura D’Aprile reports on a burgeoning movement for peace.

A new anti-militaristic, internationalist movement is growing in Italy thanks to port workers who, in the 1903 words of famous Italian anarchist Pietro Gori, have declared a ‘war against the war’. Since 2019, workers have been refusing to load ships with weapons or other military equipment that could be used to kill civilians. These workers are part of a larger, expanding international network, from the US to New Zealand, and across Europe and Africa.

The protests began in May 2019 when Genoa port workers refused to load two electricity generators onto a Saudi Arabian ship called the Bahri Yanbu. José Nivoi, from the Genova Collettivo Autonomo Lavoratori Portuali (Autonomous Port Workers Collective, CALP) explained to New Internationalist that the generators were registered for civilian use, but would have been used by the Saudi Civil Guard to fight in Yemen.

Workers from CALP documented what was inside the shipment and shared the information with the Port Authority. Then they went on strike. ‘We kept protesting until the Delta company, which takes care of the loading for the Bahri in Genoa, and the Bahri company itself refused to take on the shipment here,’ said Nivoi. This was the CALP’s first win.

‘Now we are more mature, more aware of the extent of the arms traffic through the Italian docks and our network is growing day by day,’ explained Nivoi. ‘Since 2019, we have started to attend different public assemblies in Italy and Europe to explain what we do and why we have joined this internationalist movement against war.’

The port workers did not want to be complicit in the slaughter in Yemen, or in any other war. They also wanted to highlight the hypocrisy of the Italian state as the movement of arms through Italy’s docks goes against its laws and constitution. Article 11 of the constitution rejects war as an instrument of aggression and as a means for the settlement of international disputes. There is also a law which forbids the transit of weapons headed to countries that use war as final resolution. And yet, the Italian government keeps selling weapons to countries like Qatar and Egypt which both have terrible human rights records.

It’s not surprising that the authorities have been trying to suppress this anti-militaristic movement. Full implementation of this law, and of the constitution, would damage the Italian weapon industry, which plays a significant part in the country’s economy, as well as the relationship with autocratic states, especially in the Middle East.

Five Genoa port workers are currently under investigation for criminal conspiracy for taking part in the strike against the Bahri Yanbu in 2019. José Nivoi is one of them. ‘The purpose is to undermine us, to prevent us from remaining politically active and to keep us at heel until the [legal] process is closed,’ he explained. Despite the persecution of activists, Genoa port workers have not given up and have received messages of solidarity from anti-militaristic movements outside Italy and even from the Vatican State.

Over time, Genoa union workers have been joined by local groups committed to safeguarding local citizens and protecting the environment. The city port is located near a densely populated neighborhood and the transit of dangerous shipments through its docks poses a threat to workers and residents, as shown by the huge August 2020 explosion in Beirut. Over 200 people were killed when ammonium nitrate stored at the Lebanese capital’s port exploded.

‘Now our fight is a matter of citizenship, it’s not just about 20 crazy men from the CALP,’ Nivoi said.

The Genoa port workers have inspired similar actions in Livorno, Ravenna and Naples. As Israel bombed Gaza in May this year, members of the Unione Sindacale di Base went on strike in Livorno, Tuscany. CALP and Weapons Watch (a Genoa-based group that monitors arms shipments through Europe and the Mediterranean area) had informed them that a ship loaded with weapons headed to Israel was about to travel through the city’s docks. The Asiatic Island and its load of high-precision rockets were also bound for Naples, but had to face the opposition of SI Cobas union workers and the thousands of people who marched to the port to support them.

‘We decided not to collaborate with the transit of weapons that would be used to kill people,’ Mario Silvestri of SI Cobas Turi Transport explained. ‘That was our first action, but now we are figuring out the path to follow to make a better opposition, in accordance with other local movements.

Now our fight is a matter of citizenship, it’s not just about 20 crazy men from the CALP

‘Our aim is to ban all the transit of weapons through our docks. We know that it is something very difficult to achieve, but we will try our best.’

The most recent workers to join the movement were from the transport sections of unions in Ravenna, northeast Italy. In June, after they learned that their dock was to be visited by the Asiatic Island in order to load up weapons bound to the Israeli port of Ashdod, workers declared a strike until the owner of the ship reversed his decision.

Italian port workers are not alone in their fight against the transit of weapons. They are part of a larger network of anti-militaristic movements of dockworkers, activists and politicians all over the world. ‘The transit of weapons does not involve just Italy, it is an international matter. That is why we need an international network,’ Silvestri explained. The Italian dockworkers are now organizing an online public assembly, scheduled for 16 July, and open to anyone committed to stopping the movement or arms.

The work of dockworkers in Italy, and abroad, shows how powerful class solidarity can be. The war against the war has just begun.

This article was funded by the Polden-Puckham Charitable Foundation.