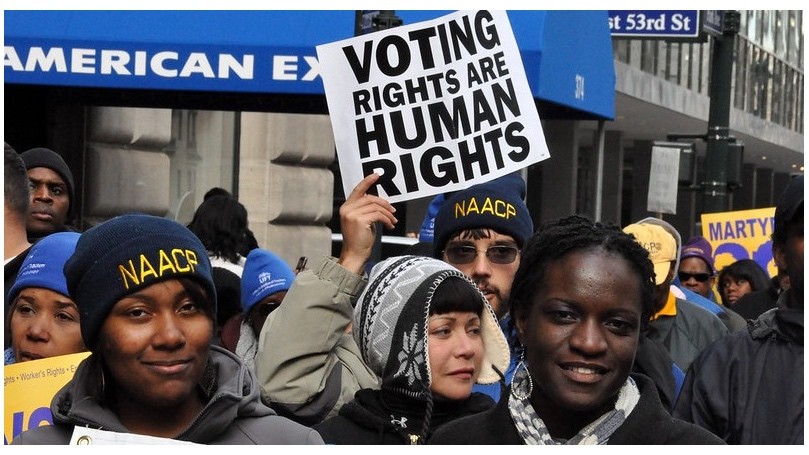 Our country’s election system and our democratic rights are under severe attack by the Republican Party, pro-fascist forces, and their corporate backers.  They are particularly attacking African American, Latinx, Native American, Asian American Pacific Island and young voters, with the proliferation of voter suppression laws ranging from making it more difficult to register and vote, to allowing the nullification of votes already cast.

Since the 2020 elections, more than 350 voter suppression laws in 49 states have been introduced. This is nothing new, but it is on a scale not seen since the Jim Crow era. These laws have escalated from election to election because, as is now understood by millions and even admitted by some Republicans, the more people who vote, the more progressive the elected representatives. Republicans know they cannot win without these laws.

The so-called excuse for this proliferation is the myth of voter fraud, the same false excuse made for the last 30 years. Their aim is to push the Big Lie that Donald Trump “won” the election last Nov. 3 despite overwhelming proof that Joe Biden and Kamala Harris were elected with 81 million votes to 74 million for Trump. It was the most enormous voter turnout in history, the cleanest, fairest, most carefully observed election, and the most meticulous vote count ever.

The right-wing rationale for this myth is to undermine people’s confidence in the electoral system.  This fraud continued in Maricopa County, Arizona, with a fourth, and secret, recount by a private firm with no accountability or transparency many months after the election.

The Republicans seek to reverse the huge grassroots victory won by the people in the 2020 presidential election, first by recapturing majority control of the House and Senate in the 2022 mid-term elections and then capture of the White House in 2024. The Republicans know they cannot win without smashing the grassroots coalition that mobilized such a huge voter turnout in 2020.

Their weapons are familiar: vicious white supremacy; hatred of unions and organized labor; an open war on Latinx, immigrants, and Muslims; and the targeting of women and youth. At a cost of hundreds of thousands of lives, they whip up hysteria against COVID-19 vaccinations and all public health measures like wearing masks in their crazed drive to recapture majority control of government. They are determined to split the powerful grassroots unity of all these forces that won so decisively in 2020, turning out enough votes to defeat the Republicans in most battleground states—Arizona, Georgia, Pennsylvania, Michigan, and Wisconsin.

The single purpose of the Republican vote suppression drive is control of all three branches of government by a right-wing minority. The goal is a system where the losers win (the same as the purpose of the filibuster). With the composition of the current Supreme Court, which will hear legal challenges to the laws, fighting these latest efforts to stop voting is yet another uphill battle for democracy.

It is imperative that a new universal federal election law and process be put into place to guarantee free and fair elections—one person, one vote.

The Trump-instigated January 6th coup attempt brought the struggle for democracy to a new level.

In the run-up to the 2020 elections, there was determination to overcome every obstacle placed in the way of voting. There were massive voter registration drives. There were the inspiring examples of people braving the coronavirus and standing in lines for hours and hours. The pictures of the Georgia and Wisconsin primary lines have been indelibly inscribed in people’s minds. We saw musicians and actors entertaining people in line. We saw people bringing food and coffee to people standing in line. And people voted, and voted, and voted. And Stacey Abrams became a household name. For every voter suppression law passed, there was organization to overcome it.

The history of the right to vote in our country has been a long and bloody struggle with many people giving their lives, including the fight for “no taxation without representation” against the monarchy to the same fight for representation, this time for D.C. statehood; the movements to extend the vote to non-property owners, African American men, and women; the struggle for the 1965 Voting Rights Act; and the fights against the poll tax and all Jim Crow laws—right up to the modern-day Jim Crow laws of the new voter suppression assault. Our entire history has seen the struggle to expand the right to vote move from one battle to the next. And as long as the Electoral College exists, there is no such thing as “one person, one vote” in the country. These struggles and gains have been hard-fought, costing many lives and much bloodshed.

The Jim Crow 2.0 laws are racist to the core. The most well-known is the Georgia law, which is a direct product of both the Biden win in that state and the victories of Raphael Warnock and Jon Ossoff in the Senate runoffs against incumbent Republicans. But there is also the Iowa law; draconian proposals in Nevada, Arizona, Florida, and Texas; plus hundreds of proposals in the other 43 states.

What are some of the most egregious aspects of these laws and proposed laws?

There are plenty more, but fundamentally they all fit into four main categories, according to the Brennan Center for Justice:

What do we need to fight back?

First and foremost, passage in the Senate of HR 1 / S 1, the For the People Act, which deals with the fundamental right to vote, and HR 5, the John Lewis Voting Rights Act, which will restore the Voting Rights Act and its pre-clearance requirements for changes to voting laws.

Voting is a fundamental constitutional right, not an entitlement. It applies equally to all Americans. That is what Section 5 of the Voting Rights Act guarantees, and that’s what would be restored and expanded with HR 5.

As Stacey Abrams stated succinctly, “As long as states have the ability to engage in voter suppression, to react to communities of color participation by putting up these barriers, then we are all in danger and our democracy is in danger.” This is the importance of passing HR 1 and HR 5 in the fight for democracy.

But there will also be other bills, some already existing, others to be drafted, dealing with:

Coalitions of dozens of national and local organizations are registering new voters and fighting the suppression laws and proposed laws. Legal challenges have been filed in Georgia and Iowa. Some of the most egregious proposals have been defeated; in Arizona, a proposal for aggressive voter purges died in the state Senate after passing in the House.

Positive laws have also been passed. For example, in New Jersey, there is now early voting in addition to no-excuse mail-in voting. In New York City and Alaska, there is ranked-choice voting, and now Virginia cities and counties can opt in. In Kentucky, voters can fix errors on their mail-in ballots to stop them from being thrown out.

What needs to be done? The many organizations fighting against voter suppression deserve support and participation. Every locality should keep track of voter suppression, as well as positive laws introduced in their state, to join in the fight against or for them. Positive laws should be introduced to expand voter rights. These fights are centered in the states. This is a fight for democracy, and the American people are overwhelmingly in support of this fight as all the polls show.

Get in the fight! Call the Capitol switchboard at 202-224-3121 to contact your senators and demand they support the For the People Act and the John Lewis Voting Rights Act. Get involved with a voting rights organization in your area. Join the CPUSA at cpusa.org and get active in the many clubs and districts who are involved in the struggle for voting rights.

This statement was issued by the CPUSA Political Action Committee.