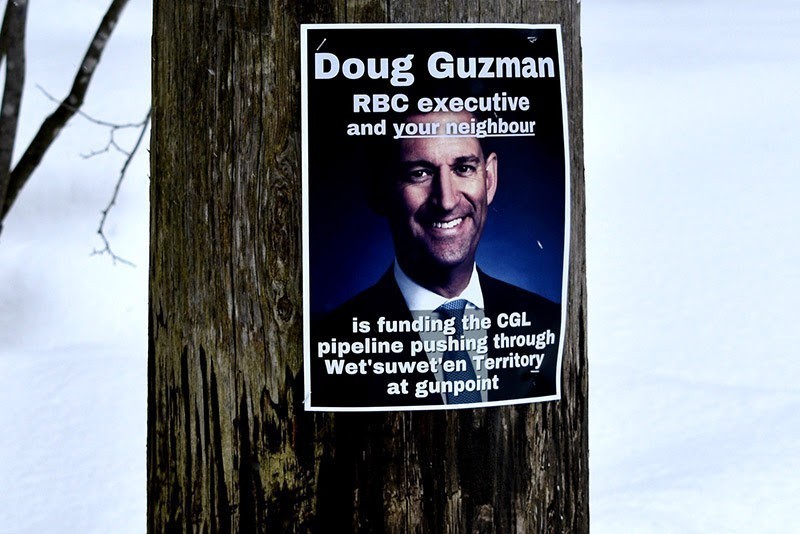 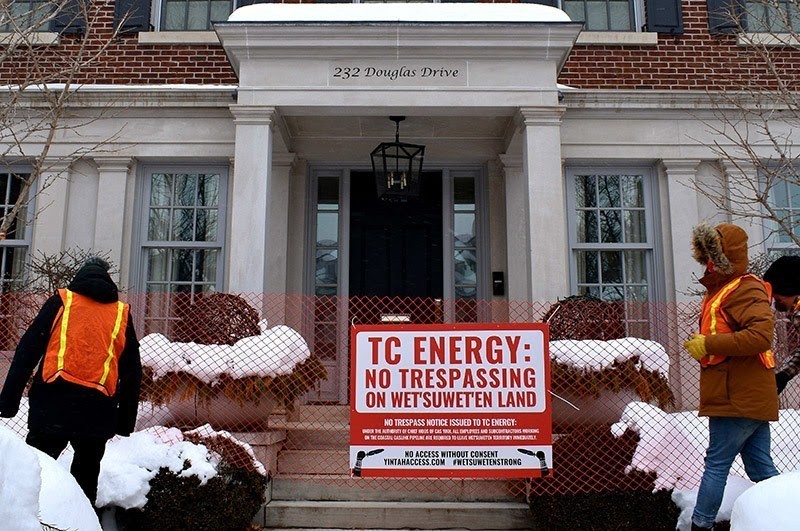 Toronto, Ontario, Canada — This morning, Toronto supporters of the Wet’suwet’en land defense struggle against the Coastal Gaslink pipeline set up construction sites at the Toronto homes of TC Energy Board Chair Siim Vanaselja and Royal Bank of Canada Executive Doug Guzman. The supporters also flyered the neighborhood with photos of the two men with signs warning, “Your neighbour is pushing the Coastal Gaslink pipeline through Wet’suwet’en Territory at gunpoint.”

Rachel Small, Canada Organizer for World BEYOND War, said, “Today supporters took action to bring the message home to Siim Vanaselja and Doug Guzman, two men leading companies that are orchestrating, funding, and profiting off of the violent colonial invasion of unceded Wet’suwet’en territory. The decisions they make are directly linked to the militarized violence that the RCMP has carried out on Wet’suwet’en people over the past several months to shove through the Coastal Gaslink pipeline at gunpoint.”

In November, RCMP deployed military-style police units – including snipers, heavily-armed assault teams, and canine units – against unarmed Wet’suwet’en land defenders during a raid on land defense camps set up to stop pipeline construction crews from drilling under the Wedzin Kwa river. During these raids, the RCMP destroyed several of the land defenders’ homes, using axes and a chainsaw, and burned one home to the ground.

“The home of my sister, Jocelyn Alec, was burned down and bulldozed after she was violently arrested and removed at gunpoint,” said Wet’suwet’en Land Defender Eve Saint. “She is the daughter of Hereditary Chief Woos, and her home was on our traditional, unceded Wet’suwet’en territory.”

Rachelle Friesen from Community Peacemaker Teams expressed support for the action, “We can’t stand by and let executives like Siim and Doug continue to ignore the impacts of their decisions while militarized police force through their investments. Across Turtle Island people are rising up to show that we will not back down until the Coastal Gaslink pipeline project and the RCMP leave Wet’suwet’en territory.”

TC Energy is constructing Coastal GasLink, a $6.6 billion dollar 670 km pipeline that would transport fracked gas in northeastern B.C. to a $40 billion LNG terminal on B.C.’s North Coast. The project runs through the unceded territory of the Wet’suwet’en Nation and has been met with ongoing resistance from the nation’s hereditary leadership who hold authority over traditional territories. Wet’suwet’en land defenders and their supporters have vowed that they will not allow construction to continue on unceded Wet’suwet’en territory without the consent of Wet’suwet’en Hereditary Chiefs.

RBC is one of the Coastal GasLink pipeline’s primary financiers, and played a leading role in securing the project finance package that would cover up to 80% of the pipeline’s construction costs.

On January 4, 2020, Wet’suwet’en Hereditary Chiefs issued an eviction order to Coastal GasLink, which one of the nation’s five clans, the Gidimt’en, enforced in November by blocking roads and preventing pipeline workers from accessing work sites. The eviction orders Coastal GasLink to remove themselves from the territory and not return and highlights that TC Energy’s construction on Wet’suwet’en land ignores the jurisdiction and authority of Hereditary Chiefs and the feast system of governance, which was recognized by the Supreme Court of Canada in 1997.

Said Gidimt’en spokesperson Sleydo’ of the ongoing invasion of unceded Wet’suwet’en territory, “It’s infuriating, it’s illegal, even according to their own means of colonial law. We need to shut down Canada.” 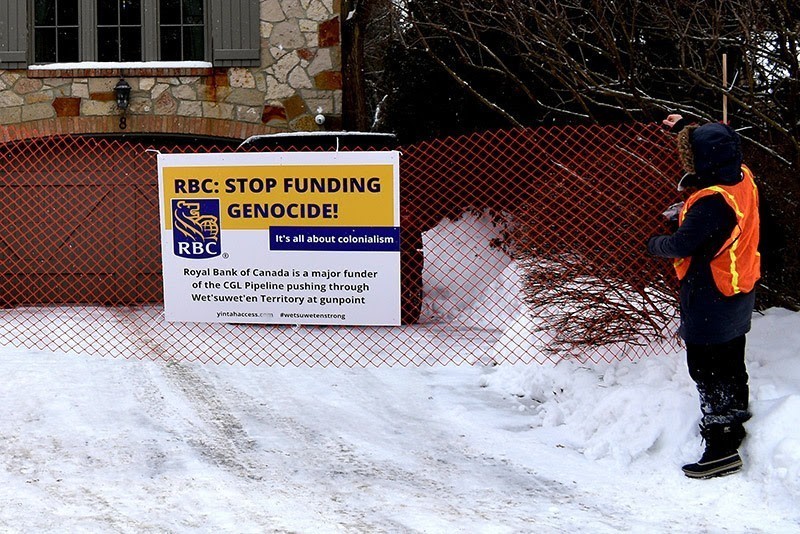 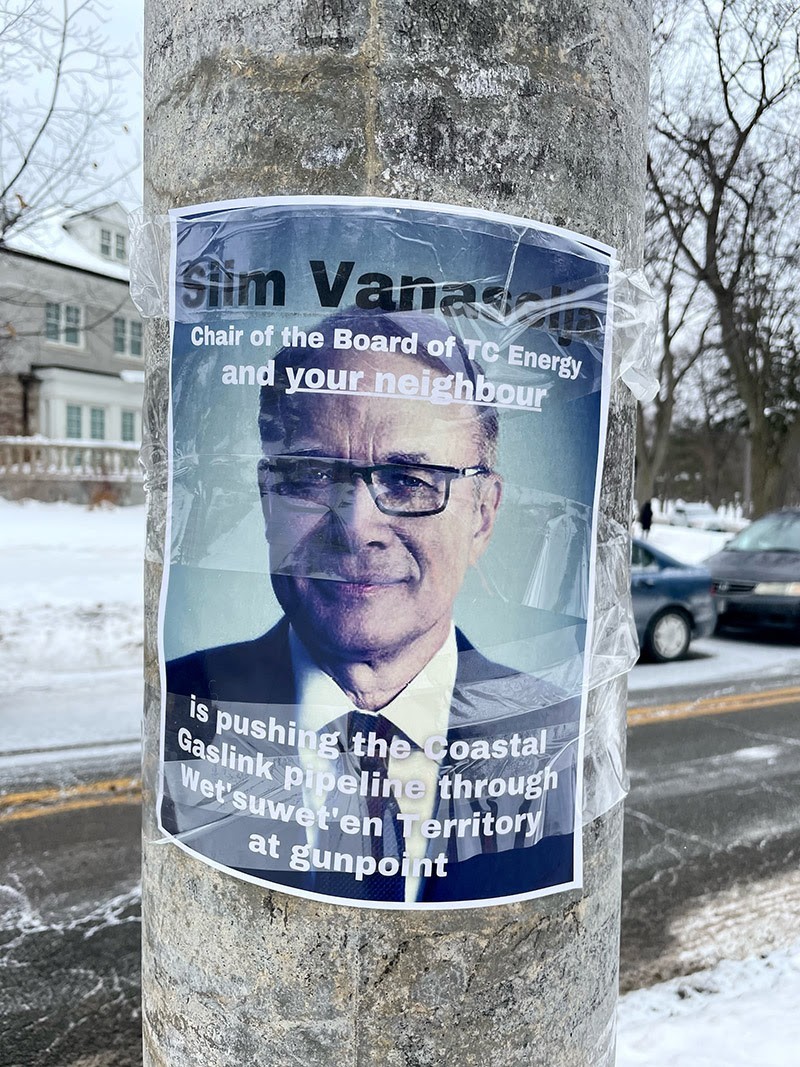 The construction of Israel’s Gaza concentration camp is complete

Fighting Racism in Construction from the bottom up