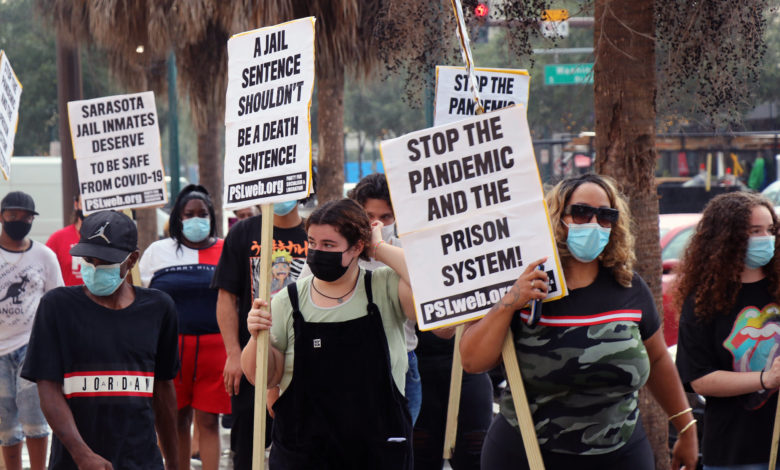 On Sept. 9, activists protested outside Sarasota County Jail to demand proper medical care and health conditions in response to the outbreak of COVID-19 among prisoners and staff. They held signs saying “A jail sentence shouldn’t be a death sentence,” and “Stop the pandemic and the prison system!”

The protest brought together activists and community members from Manatee and Sarasota counties, as prisoners in both county jails report inhumane treatment and medical neglect as the deadly Delta variant spreads throughout the crowded facilities.

“We’re here because we know that in Manatee County, inmates are given one mask a week. Guards aren’t wearing masks. Inmates are getting Covid-19 and having to suffer, not being tested, not being vaccinated, not given medical treatment in the jails. And this isn’t right. Just because someone commits a crime? They deserve human rights,” said Melanie Lavender, a local activist, spoken word artist and radio host at 1075TheVibe.

“So we’re here today to get some transparency from both Sarasota and Manatee counties. We want to know how many inmates are getting COVID; what are they tested for; why aren’t they being given vaccines after requesting vaccines,” said Lavender.

Traci Lipton also spoke at the rally to demonstrators gathered at the intersection near the Sarasota County Clerk of Court.

“There’s also inmates who filed out the correct paperwork for vaccinations over six weeks ago and they haven’t heard anything. [Jail officials] aren’t being transparent about what’s going on in there, they’re denying people visitation and [inmates are] getting sick. One of the inmates said to one of us: ‘I don’t want to die, not like this, not in jail,’” said Lipton. “It could be any of us. Regardless of what they did, they are human beings and they deserve to be treated with medical care.”

Kiera Forlenza spoke to the crowd about how the pandemic has not only affected the health and safety of prisoners, but also the constitutional rights that would normally allow them to pursue their freedom.

“From a legal perspective, not only do we have this pandemic of COVID-19, but we have the suspension of constitutional rights. Everyone in the United States, under the constitution, has the right to a speedy trial. Florida has rules in place; a misdemeanor means 90 days, a felony means six months. In March of 2020, the U.S. Supreme Court and the Florida Supreme Court allowed the suspension of speedy trial. So not only are people in jail on bonds that they cannot afford, they cannot have a trial.

“So the suspension of speedy trial is a huge violation. A blanket suspension like this, for this amount of time, is unprecedented. Not only are we putting them in unsafe conditions, but we are violating their constitutional rights and we are criminalizing poverty, because that’s who can’t afford to bond out,” said Forlenza.

Alaina Martinez, founder of The Leaders Rights Organization and central organizer of the protest, spoke about the cruel conditions facing prisoners and the retaliation some have experienced for seeking better care.

“There are people inside of the jail [that report] that it’s taken five and six hours to get just a cup to drink water. They are barely being able to eat. They are being asked to come to the door in order to get medication, but some of them are not able to lift their bodies off the bed and make it to the door, so they are literally crawling to the door to get medication. There has to be a better way.

“When we reached out and chose to advocate for different individuals in the jail, there was retaliation from nurses that started to happen to the inmates. I personally, firsthand, heard a nurse hit a jail cell and tell the man that he has “f-ing COVID, what the f- does he expect?

“We have to teach people to be able to care. It’s very hard to get someone to care about an inmate. A person can see a person hanging on TV and in their mind thinking it’s ok because they’re an inmate.”

One woman, Christine, was driving away from the jail and expressed support for the protest, saying that her wife was in the jail. Protesters waved her over, shouting for her to join them, so Christine parked her car and came out with her dog.

“They keep them all together whether they have COVID or not. My wife was in there for 30 days a month ago and she’s back in there now, but this girl had COVID and they kept her right in the same pod with them. They don’t care,” said Christine. “If you want to go to medical, you have to pay $10 to get a medical request. My wife’s got a lung infection, diabetes, congestive heart failure, psychosomatic seizures. She could have a seizure and they think she’s faking and they’re going to scream and yell at them in their face. They don’t take care of none of them inmates, nothing.”

Demonstrators marched around the jail, chanting slogans such as “How many people have to die? Change the policy inside!” and “No justice, no peace. It’s time to release!”

On September 16, activists will hold another demonstration outside Manatee County Jail, calling for urgent action at both jails.