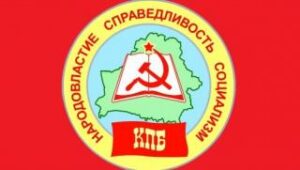 In the context of a new round of escalation and international pressure on the Republic of Belarus, we want to inform the international Communist and Labour Movement about the real situation in our country. The Communists have repeatedly argued that the nature of modern capitalism, for all its metamorphoses, remains unchanged. Having taken the form of globalism, imperialism, in its attempts to get out of the global financial and economic crisis, is trying to redefine the world, for which it has waged, in fact, the Third World War in various areas – economic, ideological, and informational. The COVID pandemic is also used for this purpose. It has become a formal reason for limiting political activity and establishing social control, despite the fact that Western states have not taken any effective measures to really protect the population.

Against the background of new global problems, acting purposefully and consistently, the capital plunges countries and entire regions into financial and economic dependence, which subsequently leads them to political subordination. These actions have already been termed as hybrid war, as well as neocolonialism, when states that previously gained independence are put back under the control of global financial groups by military and economic methods.

In 2020, Belarus experienced various forms of hybrid war and “new colonialism”, and was subjected to unprecedented external pressure, which does not stop even now. Foreign emigrant centres present it as a people-led revolution, and in fact, it is a counter-revolutionary rebellion aimed at eliminating the political leadership of the country and the collapse of an independent social state. Why can’t the events in Belarus be called a revolution? Any revolution has both objective and subjective prerequisites, and there are no such prerequisites in the form of a revolutionary situation in the country. In its turn, revolution is a process of breaking down the old system and replacing it with a progressive formation. In Belarus, there are attempts to dismantle the progressive social model, which is closer to the socialist one in its characteristics, and replace it with wild capitalism under the slogans of anti-communism, anti-Sovietism, nationalism and Russophobia. The driving force behind the counter-revolutionary insurgency are elements of the so-called national bourgeoisie that wants more influence on decision-making and is in cahoots with external forces that pursue their own geopolitical goals in Belarus.

The campaign of destabilization organized by the collective West and their support groups inside the country has been going on for about a year and has several main stages.

At the initial (electoral) stage, the government was declared criminal, and the presidential elections results – rigged in advance. Since the end of the voting, without waiting for its results, mass riots have been organized in the capital and regional centres. The main participants in the riots were neo-Nazi, nationalist, and anti-communist groups and criminal elements whose goals were to seize power, dismantle the social welfare state, decommunize, privatize, restore Nazi state symbols and break off relations with the Russian Federation.

After the failure of the electoral stage, including attempts to organize strikes at enterprises that did not find support from the workers, some activists openly switched to preparation of terrorist attacks, terror, and sabotage against President A. G. Lukashenko, representatives of the public authorities and their supporters. Following the example of the Ukrainian “Maidan self-defense”, attempts were made to organize decentralized criminal groups in the districts of the capital and large cities. Law enforcement agencies detained several dozen combat groups that were at different stages of the implementation of the plan. One of them managed to import explosives and weapons from the territory of Ukraine, where the fighting is under way.

At the same time, some radical groups were directly coordinated through the Ukrainian neo-Nazi movement, the so-called “Belarusian Volunteers”, who provided material and organizational assistance in the preparation of groups, provided them with bases and the possibility of withdrawing to the territory of Ukraine.

At the same time, open subversive activities did not find support both among the population supporting the legitimate government, and among the part of the opposition that was not ready to support and finance terror. As a result, both the externally controlled protest movement and the activities of illegal groups did not achieve their goals.

Subsequently, the third stage of diplomatic and economic pressure on the government and sanctions was organized. At the moment, a number of opposition structures are operating from abroad, being under the jurisdiction of the European Union, and at the same time under control of the US emissaries, and call themselves “legitimate governing bodies”. There are at least two emigrant centres in Poland and Lithuania, from which diplomatic activities related to attempts to impose new sanctions against our country are coordinated. They are trying to achieve internal destabilization by reducing the standard of living of the population and its income.

As President of Belarus Alexander Lukashenko noted on this occasion, foreign intelligence services have moved from organizing street riots to the stage of strangulation: “The search is under way to find new vulnerable points, and it is aimed not only at us: we are a testing ground for them, an experimental platform before a dash to the East. After testing it with us, they will go there.” In this light, in the opinion of President A. G. Lukashenko, special attention should be given to the preservation of people’s living standards and the implementation of socially significant programs. “This is about pricing and ownership,” he said.

Of course, foreign structures are not satisfied with the fact that the social situation in Belarus remains stable; enterprises, the social sphere work as usual, law enforcement agencies provide security. And in this case, the aviation provocation of May 25, 2021, with a foreign aircraft was used by the United States, Great Britain and the US satellite countries in Eastern Europe to call for an air and economic blockade of the Republic. The most active in this regard are Poland, the Czech Republic, Lithuania, Latvia and Ukraine, that, in fact, have become operational centres for the actions of the opposition.

At the same time, the Communists remind that subversive activities against Belarus, as well as material and organizational support for opposition groups, are carried out at the expense of taxpayers in Europe and the United States. These expenditures are not transparent; even the fact of any material support for the opposition is officially concealed.

Therefore, we ask our comrades in the Communist and Labor Movement to request such information from their national governments (Poland, Lithuania, Latvia, Estonia, the Czech Republic, Slovakia, and Ukraine), and to publicly disclose it. In fact, in the context of the COVID-19 pandemic, material resources are spent not on social support for their citizens, but on political games in the interests of the United States and distraction of their own population from domestic problems.

We also ask the Communist Parties of friendly states to use the parliamentary rostrum to publicly support the Republic of Belarus and express their attitude to the subversive actions of the United States. The Communists of Belarus understand that the political crisis in our country is not only an element of destabilization of the situation in Russia, but also an attempt to disrupt the Chinese initiative of the “Belt and Road” on the European continent. Moreover, a similar buffer of instability is now being created by the Americans around the PRC in the South-East Asian region. With their support, new regional conflicts are being instigated, which are designed to divert the forces and resources of states such as the People’s Republic of China and the Russian Federation.

In fact, these are elements of a new “policy of deterrence” in the new “cold war”. And Belarus, like a number of other countries, in this case becomes a hostage to the confrontation initiated by the United States. In these actions, the active accomplices of the United States are their satellites in Eastern Europe, which previously carried out decommunization and, in fact, restored the interwar Nazi regimes in content and form.

We have also witnessed state vandalism, when countries such as Latvia and Lithuania insult Belarusian national symbols and use the symbol of nationalist protest – the white-red-white flag, which was used in Belarus during the German occupation by pro-Nazi groups, to indicate their sympathies.

The Communists of Belarus appeal to all the Communist and Workers’ Parties of the world to provide all possible assistance and demonstrate international solidarity with the Republic of Belarus.

We ask you to organize political pressure on the leaders of the states provoking chaos in the Republic of Belarus in the forms available to you – including in the media and parliamentary bodies. Every act of international solidarity is now extremely important for us, when, in fact, the Americans are trying to provoke the blockade and division of our country on the principle of the Yugoslav events.

International solidarity is our strength! The enemy will not pass!

Central Committee, Council of the Communist Party of Belarus

US Friends Of The Soviet People (USA)