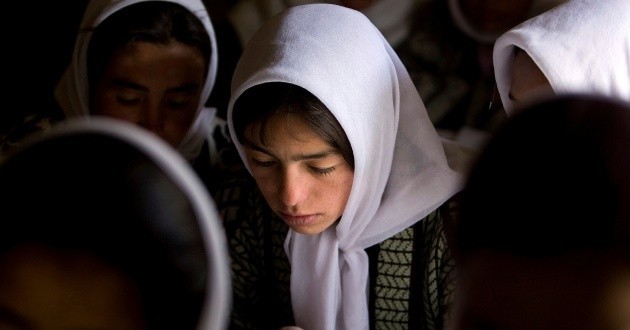 Blocked from education by the Taliban, Ritu Mahendru speaks to young women risking their safety to teach younger students.

Two months on from the Taliban takeover in Afghanistan, women and girls have been pushed out of work, education and face disparate forms of violence. Afghanistan is on the brink of famine, there is no work, and social services have come to a standstill. The banks are closed, the economy is collapsing and freedom of speech is shrinking. International aid remains limited and is failing to reach everyone. Many Afghans continue to live in fear.

The Taliban have banned secondary school education for girls but, despite the risks, teenage girls in Afghanistan have set up schools in their homes to educate their younger peers. Sutooda is one of them. ‘I am teaching other girls, my neighbours and my cousins,’ the 14-year-old explained. ‘I teach them Dari and Maths. I support them with their homework.’ Her students are aged between 9 and 11 years old.

‘Losing our education means losing our lives. When there is no education we are like dead bodies. We feel so inferior,’ Sutooda continued. ‘They [the Taliban] are worried that if they gave an opportunity to girls to go to school, they will be more powerful. The Taliban is afraid of women that’s why they banned us, because they know that we will fight for our rights.’

I know girls are being deprived from education so I decided to teach them. I don’t want them to waste their time

Gul (not her real name), is 15 years old and said her family are encouraging of her decision to teach other girls. ‘I came first in my class. I know girls are being deprived from education so I decided to teach them. I don’t want them to waste their time,’ she said.

It’s clear that the Taliban is returning to its hardline policies working within an extreme version of Islamic Law. Its solution to lawlessness and corruption is to rule using what they have declared the ‘true and pure Islam’. Now, the so-called Islamic Emirates of Afghanistan has permanently shut the Ministry of Women Affairs, stripping women of jobs and their rights. In the newly formed government, there is not a single female minister. Women are not able to leave home without a mahram (a male guardian).

The Taliban cited girls’ safety and security as its key reasons for stopping them going to school. However, Gul and Sutooda say the biggest fear for Afghan women and girls has always been and still is the Taliban. They are now too afraid of violence to walk on the streets of Kabul.

‘Since the Taliban took over I haven’t gone outside the house. If I go outside they will hit or beat me – they will marry girls forcefully,’ said Gul.

Sutooda has only left the house in the car with her father. ‘Most of the times I am drawing. I think my studies were for nothing,’ she said.

‘I feel stressed. I wish it were all a dream. We had lots of achievements in terms of human rights, women rights, and individual families [before the Taliban took over]. It’s shameful. It’s a disaster. We lost everything in one night.’

Since the Taliban took over I haven’t gone outside the house. If I go outside they will hit or beat me – they will marry girls forcefully

‘The Taliban says that girls can’t go to school until there is safety,’ said Gul. ‘Even though previously the city wasn’t safe and there were suicide attacks, all girls were going to school. It’s the Taliban who has bad feeling for girls. Because they had no idea about girls’ education.’

The Taliban have pledged to review the curriculum for Afghan schools, a move likely to reduce students’ access to a range of subjects and further constrain girls’ education. New Internationalist spoke to young women who were especially afraid of losing access to science and secular studies.

‘I miss my teachers and my class fellows,’ said Sutooda. ‘My favourite subjects are history and geography. History teaches us about past and we can learn a lot from it. Geography because I want to learn about other countries and their borders. They [The Taliban] will probably remove the history because there is a lot about Taliban.’

After the US-led military coalition invaded Afghanistan in 2001 it spent billions of dollars on women’s empowerment projects. The international community’s presence and funds shaped the policy agenda in Afghanistan, and there were some enormous changes to all aspects of Afghans’ lives. Against staggering odds, women and girls have since made significant achievements in education and health sectors.

Millions more girls were in school than they were under the Taliban rule. Although the situation of Afghan girls was never satisfactory, 3.5 million children remained out of school – 85 per cent of them girls. Only 37 per cent of adolescent girls are literate, compared to 66 per cent of boys of the same age. However, there was a hope amongst Afghan women that their rights would advance through their increasing presence as key members of the Afghan society – as activists, politicians, researchers, musicians, journalists, actors, business leaders and sports people.

Afghan girls know about the world and their rights. We are not the girls they beat 20 years ago

‘Education is the main basis of freedom and any civilization,’ tweeted Afghan journalist Massoud Hossaini who managed to escape to the Netherlands following the Taliban takeover. ‘If the girls are banned from higher education, the Afghan society will never progress and have a change for a better future.’

‘Time is passing and girls will remain uneducated,’ said Sutooda. ‘There won’t be any women to govern, or work in NGOs, or as doctors.’ But she remained defiant: ‘Afghan girls know about the world and their rights. We are not the girls they beat 20 years ago.’

Despite the fact that the West knew the Taliban were a repressive regime, especially towards women, the US government have remained largely silent about human rights violations against women and girls. Afghan women are living the legacy of the so-called ‘War on Terror’. Many of them see the US and its allies as instrumental in nurturing the environment in which the Taliban grew and thrived, along with their repressive politics.

Both Sutooda had a message for the international community: ‘They shouldn’t recognize the Taliban as an official government unless they let women go to schools… According to human rights law, women and men are equal.’