Again on the transformation problem… 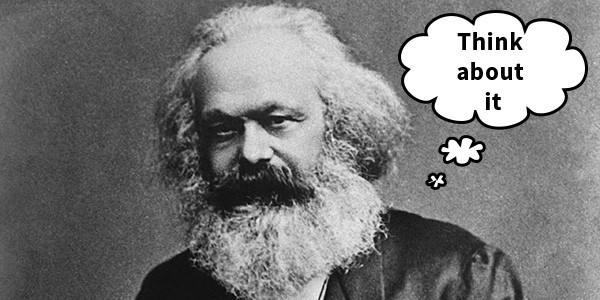 In 2013, Michael Heinrich wrote an essay on what he considered the basic fallacy of Marx’s labor theory of value that included these words:

In the first half of the nineteenth century, it became clear that periodic economic crises were an inevitable component of modern capitalism. In the Communist Manifesto, they were regarded as a threat to the economic existence of bourgeois society. Crises first took on a special political meaning for Marx in 1850 when he attempted a closer analysis of the failed revolutions of 1848–1849. He now regarded the crisis of 1847–1848 as the decisive process which led to revolution, from which he drew the conclusion: “A new revolution is possible only in consequence of a new crisis. It is, however, just as certain as this crisis.”

In the following years, Marx eagerly awaited a new deep crisis. It finally came in 1857–1858: all capitalist centers experienced a crisis. Whereas Marx acutely observed the crisis and analyzed it in numerous articles for the New York Tribune, he also attempted to work out his critique of political economy, which he had planned for years. The result was the untitled manuscript which is known today as the Grundrisse.

In the Grundrisse, the theory of crisis bears the stamp of the expected “deluge” that Marx wrote about in his letters. In an early draft for the structure of the manuscript, crises come at the end of the presentation, after capital, the world market, and the state, where Marx fashions a direct connection to the end of capitalism: “Crises. Dissolution of the mode of production and form of society based upon exchange value.”

In the so-called “Fragment on Machines,” one finds an outline of a theory of capitalist collapse. With the increasing application of science and technology in the capitalist production process, “the immediate labour performed by man himself” is no longer important, but rather “the appropriation of his own general productive power,” which leads Marx to a sweeping conclusion: “As soon as labour in its immediate form has ceased to be the great source of wealth, labour time ceases and must cease to be its measure, and therefore exchange value [must cease to be the measure] of use value. The surplus labour of the masses has ceased to be the condition for the development of general wealth, just as the non-labour of the few has ceased to be the condition for the development of the general powers of the human head. As a result, production based upon exchange value collapses.”

It was. and remains, the contention of most, if not all post-war Marxists, that Marx never actually embraced a theory of capitalist collapse or a theory of a solely endogenous breakdown of the mode of production. They hold to this idea despite the many references to such an idea within the body of Marx’s own writing and that of Engels, his life-long collaborator, that can be found in multiple sources.

Even if we were to accept Heinrich’s argument regarding the fragment, we would then have to explain this passage taken from Engels, taken some twenty-three years later, in a book that was notoriously popular among Marxists at the time, Socialism, Utopian and Scientific — a book so popular among Marx’s followers that it sold more copies than the Communist Manifesto itself at the time of its publication and for many years thereafter:

II. Capitalist Revolution — transformation of industry, at first be means of simple cooperation and manufacture. Concentration of the means of production, hitherto scattered, into great workshops. As a consequence, their transformation from individual to social means of production — a transformation which does not, on the whole, affect the form of exchange. The old forms of appropriation remain in force. The capitalist appears. In his capacity as owner of the means of production, he also appropriates the products and turns them into commodities. Production has become a social act. Exchange and appropriation continue to be individual acts, the acts of individuals. The social product is appropriated by the individual capitalist. Fundamental contradiction, whence arise all the contradictions in which our present-day society moves, and which modern industry brings to light.

A. Severance of the producer from the means of production. Condemnation of the worker to wage-labor for life. Antagonism between the proletariat and the bourgeoisie.

B. Growing predominance and increasing effectiveness of the laws governing the production of commodities. Unbridled competition. Contradiction between socialized organization in the individual factory and social anarchy in the production as a whole.

C. On the one hand, perfecting of machinery, made by competition compulsory for each individual manufacturer, and complemented by a constantly growing displacement of laborers. Industrial reserve-army. On the other hand, unlimited extension of production, also compulsory under competition, for every manufacturer. On both sides, unheard-of development of productive forces, excess of supply over demand, over-production and products — excess there, of laborers, without employment and without means of existence. But these two levers of production and of social well-being are unable to work together, because the capitalist form of production prevents the productive forces from working and the products from circulating, unless they are first turned into capital — which their very superabundance prevents. The contradiction has grown into an absurdity. The mode of production rises in rebellion against the form of exchange.

D. Partial recognition of the social character of the productive forces forced upon the capitalists themselves. Taking over of the great institutions for production and communication, first by joint-stock companies, later in by trusts, then by the State. The bourgeoisie demonstrated to be a superfluous class. All its social functions are now performed by salaried employees.

Here, we meet again with Marx prediction of a solely endogenous breakdown of production based on exchange value, this time in Engels’ hand and, moreover, emphasized in the original, so that the prediction cannot be missed by the reader!

Twenty-three years after Marx’s prediction in the Grundrisse, alleged by Heinrich to be made in the heat of revolutionary exuberance, the self-same prediction by his collaborator in a text that was written specifically to acquaint people with Marx’s ideas.

Perhaps, we are to believe that somewhere between the 1850s and the publication of Capital, Marx changed his mind on his prediction of a solely endogenous breakdown of the mode of production, and then, between the publication of Capital and that of Engels’ book, Socialism, the latter went his own way and on this question and issued his rebuttal to the now less than exuberant Marx.

This, it seems to me, is the only way we can make sense of the debate over what has become known as the “transformation problem.”

Now, why would the transformation problem have anything to do with what I was just writing about?