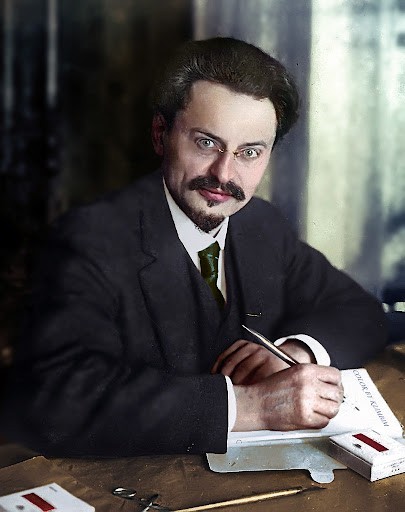 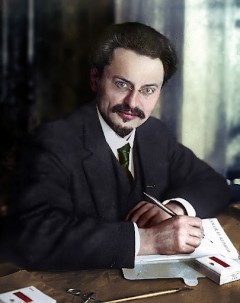 Trotskyism has been one of the most persistent and damaging opportunist ideological opponents of Marxism-Leninism within the left. In the next several articles, we’re going to look at the origin and development of this ideology, what it is and what it seeks to accomplish. But first, who was Trotsky, and what is Trotskyism?

Who was Trotsky? Briefly, Leon Trotsky was a Menshevik who came over to the Bolsheviks on the eve of the October Revolution in 1917. He was a skilled writer and speaker. After the February Revolution, he joined a centrist social-democratic group called the “interboroughites.” This small grouping joined the Bolshevik party in the Summer of 1917, and Trotsky with it. During the October Revolution he was a member of the Military Revolutionary Committee, but of course, as someone so new to the organization, he could not be one of the group that directed, organized and led the uprising. During the Civil War that followed, he became Military Commissar of the Red Army. This wasn’t a position of military leadership, but of political leadership within the military. He was basically the chief propagandist of the Bolshevik forces, while questions of strategy, operations and tactics were directed by skilled and tested military figures under the leadership of the Central Committee.

Before and after the October Revolution, he was often in strong disagreement with Lenin and the Bolshevik majority. Again and again, Trotsky’s minority views were discussed and debated, but didn’t win out within the democratic centralist structures of the party. Eventually, Trotsky and his supporters degenerated from a faction within the party into a gang of wreckers against the party and were expelled as such. From there they only grew more desperate, taking any opportunity to disrupt and sabotage the Soviet state.

So much for Trotsky. What is Trotskyism? Trotskyism isn’t just the ideas of Trotsky in that period, but a persistent, developed ideology that originated then. Trotskyism is a petit bourgeois ideology within the working-class movement. What does this mean? Every ideology has a material basis within the class struggle. For example, liberalism is the ideological expression of the material interests of the monopoly capitalist class, and Marxism-Leninism is the expression, in the field of theory, of the material, practical interests of the working class.

The petite bourgeoisie is an intermediate class that always seeks to attain the heights of wealth and privilege held by the big capitalists, but is instead driven down by the inner logic of monopoly capitalism. Because of the pressures placed upon this class, some of its members look towards the revolutionary workers movement. Many are able to transform themselves and take up Marxism-Leninism, but some aren’t able to shake the ideological influence of the bourgeoisie and are instead drawn to Trotskyism, which dovetails with bourgeois ideology in numerous ways.

Indeed, Trotskyism is an ideology that stands in the doorway between the ruling class and the working class, with one foot in each room. It seeks to present itself as a working class ideology, but always seeks to compromise with the ideology of the ruling class. Because of this dual nature, it presents itself as being very “left,” but in essence it remains on the right.

To do this, Trotskyism has come up with a number of theories, each of which run counter to Leninism and each of which we will examine in detail. For example, Trotskyism upholds a theory called “permanent revolution,” and argues that it is not possible to build socialism in one country, but that it is only possible to have a worldwide revolution that sweeps away the entire capitalist order in one stroke. Similarly, Trotskyism argues against the Leninist idea that revolution should proceed step by step, in alliance with the peasantry, instead arguing that the revolution should oppose the peasantry as a counter-revolutionary force from the beginning. This is the foundation of Trotskyism’s wrong positions on the national-colonial question, the united front, and other essential questions of anti-imperialist liberation struggles and socialist revolution. In the articles that follow we will examine each of these points in detail.

We will also have to look at some questions of history, which the Trotskyites distort in order to prop themselves up. We will look at Trotsky’s ongoing struggle against the Bolsheviks, in the leadup to the October Revolution and after. We will examine the history and development of Trotsky’s relationship with the Soviet Union, the world’s first socialist country. Finally, we will also look at Trotskyism in relation to China, the Philippines and the United States.

The real test of any revolutionary theory is practice. Trotskyism has failed this test everywhere, over and over again. Trotskyism has only brought schisms, splits and disruption. Marxism-Leninism has proven itself in practice as the ideology of successful proletarian revolution. Marxism-Leninism has brought victory to the working class and its allies in socialist revolutions all over the world, and has proved itself again and again as the way forward for the working and oppressed people of the world.

Traditions of health: Black midwives and doulas against racism

Stop the violence against the Peruvian people!