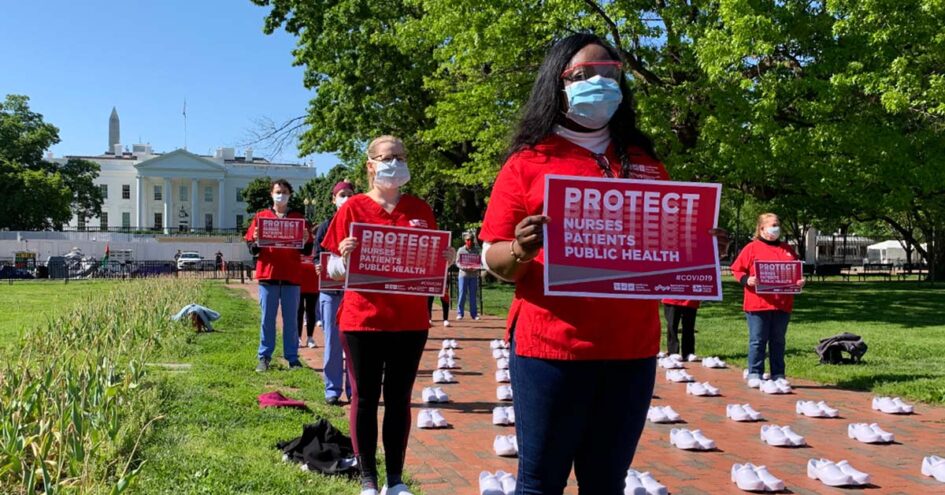 On Dec. 27, the United States reported a record-breaking number of new COVID-19 cases, with 441,278 infections. On the same day, the Centers for Disease Control and Prevention issued surprising new guidelines shortening the recommended time for isolation for people exposed to or infected with COVID-19 from 10 days to five (seven days for health care workers). 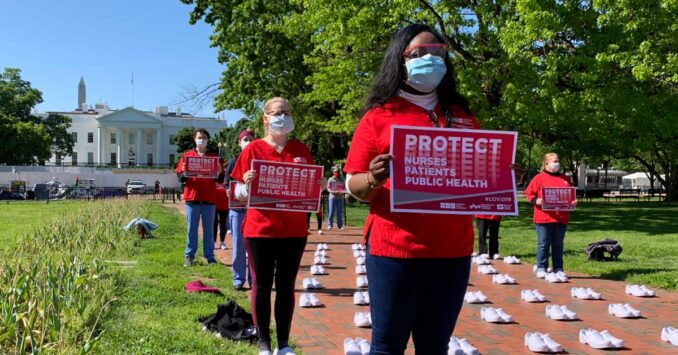 As the winter surge in new cases exploded across the country, the Occupational Safety and Health Administration announced it was rescinding an emergency standard adopted in June that had mandated protections for health care workers.

And the new CDC guidelines lack a provision for testing at the end of the isolation period. While the CDC claims the change “is motivated by science,” many workers, especially in health care and the airline industry, are calling the changes reckless and a further risk to public health.

In a Dec. 28 press release, National Nurses United noted the new CDC policy allows for an even further reduction in isolation time, “if there are staffing shortages.” The NNU “condemned the Biden administration’s latest moves to rip away protections for health care workers and the public . . . right when the omicron variant is exploding across the country during a winter surge.” (tinyurl.com/2bnf4sx9)

NNU stated that “nurses emphasize that the weakened isolation guidelines are motivated by the employers wanting workers back on the clock fast, regardless of whether it’s safe — to maximize profits.” NNU President Zenei Triunfo-Cortez, RN, added: “Let’s be clear: This is about what’s good for business, not what’s good for public health.” NNU is calling a National Day of Action Jan. 13 to demand more protection for workers.

CDC officials claim that the change was primarily driven by worries that the increasing volume of omicron infections would sideline thousands of police officers, firefighters and other essential workers needed to keep the system functioning. Yet these officials made no recommendation to cancel superspreader events like New York City’s “Ball Drop” on New Year’s Eve.

Despite daily reports of college and professional athletes sidelined by COVID-19, causing some games to be rescheduled, the CDC has never suggested that fan attendance at these events be limited, as it did in 2020 when the number of daily cases was considerably lower.

Confirming that the guideline change was implemented to serve the bosses’ goal to force workers back to hazardous jobs, several news outlets reported Dec. 29 that Delta Airlines CEO Ed Bastian and other company officials sent a Dec. 21 letter to the director of the CDC requesting the change. And Airlines for America, a trade group representing Delta, Southwest and United Airlines, wrote to the CDC Dec. 23 arguing in favor of the new guidelines.

Airline officials and bosses from other industries are concerned that the high rate of transmission of the omicron variant would make it impossible to keep businesses running, if guidelines for longer isolation remained in place. In New York City, a Trader Joe’s store was forced to close after half its workforce went out with COVID-19. Three subway lines in the city suspended services due to worker shortage.

In 2020, the airlines were given $54 million in federal aid to keep employees on their payroll during the pandemic. But those company bosses laid off hundreds of thousands of workers, creating a labor shortage in the industry. The remaining workers are reluctant to agree to extended shifts, given the industry’s disdain for their safety and health.

Sara Nelson, International President of the Association of Flight Attendants-CWA, responded to the new CDC guidelines with the following statement: “We said we wanted to hear from medical professionals on the best guidance for quarantine, not from corporate America advocating for a shortened period due to staffing shortages.

“The CDC gave a medical explanation about why the agency has decided to reduce the quarantine requirements from 10 to five days, but the fact that it aligns with the number of days pushed by corporate America is less than reassuring. . . . If any business pressures a worker to return to work before they feel better, we will make clear it is an unsafe work environment, which will cause a much greater disruption than any ‘staffing shortages.’

“We cannot allow pandemic fatigue to lead to decisions that extend the life of the pandemic or put policies on the backs of workers. . . . After more than 800,000 funerals, millions suffering effects of long COVID, our hospitals so full people can’t get the medical treatment they need and frontline workers facing violent attacks simply for working to keep everyone safe, can we finally take this pandemic seriously and do what needs to be done to end it?” (tinyurl.com/88dzy3zn)

Corporate media like the New York Times advocate letting go of testing and shifting away from publishing daily COVID-19 numbers — seemingly a conclusion that the virus is uncontrollable, so “just get used to it.”

Too much testing for COVID-19 has never been the problem. The fault lies with for-profit health care under capitalism. Access to testing has been limited from Day One of the pandemic in the U.S., along with failure to provide adequate PPE for staff and patients. A corporate-controlled media that hides and distorts facts about the coronavirus has made matters worse.

COVID-19 has always been controllable. It’s the for-profit system of capitalism that’s out of control.

Lenin on Imperialism (Part 1): A Policy or a System?

Visualizing the collapse of Keynesian policy in real time…