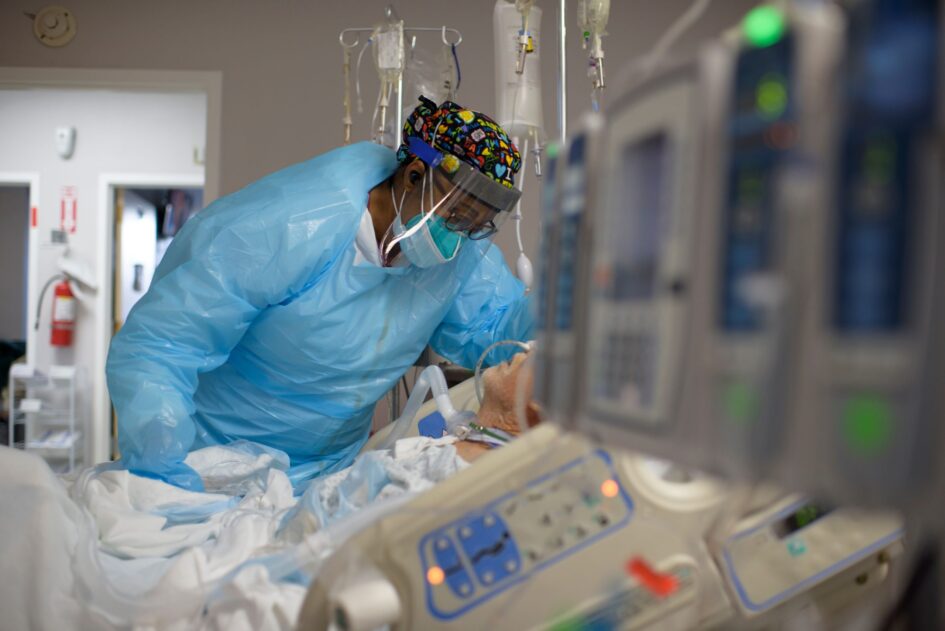 This story originally appeared in Common Dreams on Nov. 21, 2021. It is shared here with permission under a Creative Commons (CC BY-NC-ND 3.0) license.

Europe is in the grip of a potentially devastating fourth coronavirus wave and the United States has now recorded more Covid-19 deaths in 2021 than it did in 2020, heightening alarm among public health experts who fear another brutal winter surge.

Dr. Hans Kluge, the World Health Organization’s regional director for Europe, warned Saturday that the coronavirus could kill 500,000 more people in Europe by March if political leaders don’t take immediate action to forestall the current spread and increase vaccine uptake, which has been lagging in parts of the continent due, in some cases, to anti-vaccine sentiment.

“Covid-19 has become once again the number one cause of mortality in our region,” Kluge told the BBC.

In an effort to quell a major spike in cases, hospitalizations, and deaths, the Austrian government announced Friday that it would institute a nationwide lockdown and soon mandate coronavirus vaccinations for its entire adult population. Thus far, around 65% of Austria’s population has been fully vaccinated—one of the lowest rates in Western Europe.

“The virus is back with new rigor in Europe again and new catastrophic waves are imminent in Africa and Asia,” said Shailly Gupta, communications adviser with Doctors Without Borders’ Access Campaign, pointing to regions that have been denied adequate supplies of vaccines and therapeutics. “Wealthy nations need to understand that unless everyone everywhere is vaccinated, the situation is not going to change.”

Austria’s mandate, set to take effect in February, prompted immediate backlash. On Saturday, tens of thousands of people—including many aligned with the country’s far-right Freedom Party—took to the streets of Vienna to denounce the public health measure, which Austrian Chancellor Alexander Schallenberg said is necessary to break the nation’s vaccination plateau and prevent further deaths.

“We have too many political forces in this country who vehemently and massively fight against this,” he said in a speech Friday. “This is irresponsible. It is an attack on our health system. Goaded by these anti-vaxxers and from fake news, too many people among us have not been vaccinated. The consequence is overfilled intensive care stations and enormous human suffering. No one can want that.”

The Associated Press reported that “demonstrations against virus restrictions also took place in Switzerland, Croatia, Italy, Northern Ireland, and the Netherlands on Saturday, a day after Dutch police opened fire on protesters and seven people were injured in rioting that erupted in Rotterdam.”

“Protesters rallied against coronavirus restrictions and mandatory Covid-19 passes needed in many European countries to enter restaurants, Christmas markets, or sports events, as well as mandatory vaccinations,” AP noted. “The Austrian lockdown will start Monday and comes as average daily deaths have tripled in recent weeks and hospitals in heavily hit states have warned that intensive care units are reaching capacity.”

As The Week‘s Ryan Cooper noted in a recent column, “There is a clear inverse relationship between shots and spread” in Europe.

“The countries suffering truly galloping outbreaks—mostly places to the south and east like Greece, Austria, Hungary, Slovenia, and Slovakia—are typically below 70% full vaccination, often quite far below. By contrast, there appears to be a rough breakpoint near 75-80% vaccination where the rate of case growth is much slower. It’s surely not a coincidence Portugal and Spain are the most-vaccinated countries on the continent, and both have thus far mostly avoided a big resurgence.”

In the US, meanwhile, data from the federal government and Johns Hopkins University show that the official Covid-19 death toll in 2021 surpassed 385,457 on Saturday, topping 2020 fatalities. The nation’s total death count currently stands at 770,800—the highest in the world.

“The spread of the highly contagious Delta variant and low vaccination rates in some communities were important factors [this year],” the Wall Street Journal reported. “The milestone comes as Covid-19 cases and hospitalizations move higher again in places such as New England and the upper Midwest, with the seven-day average for new cases recently closer to 90,000 a day after it neared 70,000 last month.”

The surge comes as few public health restrictions remain in place across the US. Last week, the Biden administration suspended enforcement activities related to its vaccination and testing mandates for private businesses after a federal appeals court temporarily halted the requirements.

All US adults are now eligible for booster shots, but public health experts have cautioned that the broad availability of third doses may not do much to stem the current spike in cases given that it’s largely being fueled by the unvaccinated. Less than 60% of the US population is fully vaccinated against Covid-19, according to the latest figures from Our World in Data.

Just 5% of people in low-income countries have received at least one coronavirus vaccine dose.

“The evidence isn’t there that a large rollout of boosters is really going to have that much impact on the epidemic,” argued Ira Longini Jr., a vaccine expert and professor of biostatistics at the University of Florida.

Tom Philpott of Mother Jones wrote Saturday that “in the popular imagination, 2020 gets all the bad press, but this year has been no sunny day at the beach, either.”

“Sure, several effective Covid-19 vaccines emerged, but so did the highly contagious Delta variant, as well as new, more virulent strains of anti-vax sentiment, tightly yoked to conservative political ideology,” Philpott noted. “Worst of all, intellectual property hoarding has meant that the vaccines have so far largely bypassed low-income nations of the Global South, wreaking untold human misery and giving the virus ample opportunity to generate more contagious and/or more virulent strains.”