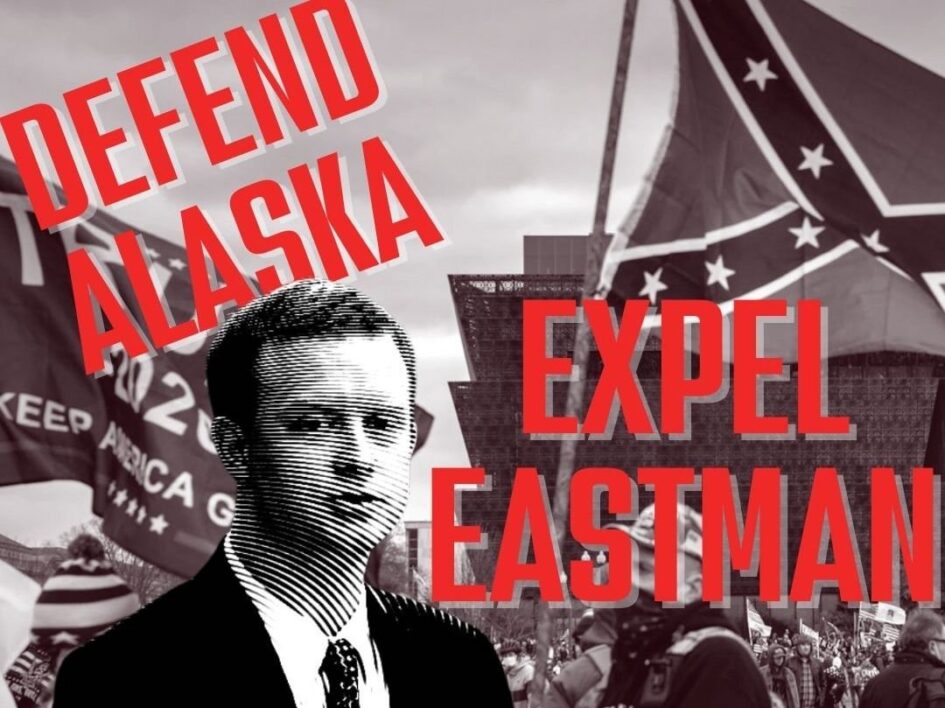 Over the course of the last month, a grassroots movement against fascism in Alaska has united around the the Coalition to Expel David Eastman. This coalition, formed by the Anchorage branch of the PSL, Sol de Medianoche, Growing Alaskan Leaders, the Anchorage NAACP and several other unaffiliated community activists has seen a growing amount of public support around one goal: expelling state House Representative David Eastman from office.

The coalition and its supporters are calling on the Alaska state House of Representatives to expel Eastman from the legislature for violating the Alaska state constitution in attending the Jan. 6 insurrection and his support for fascism. In response to the campaign to expel him, Eastman posted a video defending himself and calling the coalition “cancel culture wolves,” throwing to the ground PSL flyers for the campaign that he had printed in color. On Jan. 31, he narrowly avoided being removed from committees on a technicality. Ironically, David Eastman is on the Alaska House ethics committee.

Eastman, who represents District 10 outside of Anchorage, has openly displayed admiration for Adolf Hitler and is a lifetime member of the Oath Keepers organization, a group that played a critical leadership role in the Jan. 6 insurrection. Eastman attended the Jan. 6 insurrection but allegedly did not enter the Capitol.

Recent moves to expel Eastman come after a years-long effort

The effort to expel Eastman has existed for a longer time, but the recently formed coalition has rapidly gained a huge amount of community support. Some 2,800 people have signed a petition to expel Eastman from the legislature. In one day, the Expel Eastman coalition’s Twitter page grew larger than Eastman’s. Community members and organizers have been flooding Alaska representatives’ phones with calls opposing Eastman.

While balking on holding a vote to expel Eastman, more and more Alaska representatives are showing support for his expulsion. On Feb. 9, the coalition’s lobbying efforts to members of the legislature helped to turn the tide in a “sense of the House” vote condemning the Jan. 6 insurrection and the Oath Keepers. Rep. Andy Josephson estimated that coalition efforts turned “18 to 19 votes” for expulsion into 23, just four less than the number needed to expel Eastman.

Multiple prominent individuals have called for Eastman’s expulsion for his fascistic views and support for the Jan. 6 insurrection. On Nov. 11, 70 West Point graduates signed on to a letter calling on Eastman to resign. Bethel, Alaska Mayor Mark Springer wrote an op-ed published in the Anchorage Daily News on Jan. 25 calling for Eastman’s expulsion and listing numerous “repulsive” things he has done. Edward ReBrook IV, a classmate of Eastman from West Point, wrote a Feb. 1 article in The Midnight Sun exposing Eastman as a long-time neo-Nazi and Holocaust denier.

The coalition has also been responsible for educating the public and elected officials alike about the threat of fascism. On Feb. 6, the PSL, a leading coalition partner, held a well-attended “Friday Forum” on fascism and anti-fascism. On Feb. 12, the coalition held a town hall attended by State Rep. Harriet Drummond and House Majority Leader Chris Tuck, where these legislators were informed by members of the public that the existence of fascism in the state government is unacceptable and a floor vote to expel David Eastman from the legislature must be called as soon as possible.

Who is David Eastman?

David Eastman is a state representative from House District 10. This area, comprising a large portion of the Matanuska-Susitna Borough from Talkeetna to Wasilla, is well-known as one of the most reactionary regions of the state. Over 70 percent of the residents voted for Eastman in the most recent election.

Eastman has openly displayed admiration for Adolf Hitler multiple times, including one instance last September where he tweeted a link to one of Hitler’s speeches with the caption “no idea what made me remember this speech the other day.” The speech is hosted on a Holocaust denial website.

Eastman also paid homage to Hitler soon after the Jan. 6 insurrection in 2021 when he posed in front of a quote from Hitler defending and advocating genocide at the Holocaust Museum in Washington, D.C. The quote, which is the only photo Eastman posted from the museum, states in part, “who, after all, today speaks of the annihilation of the Armenians.” In the photo, Eastman is standing “in a pose of attention, a sign of military respect,” according to Bethel mayor Springer.

Eastman’s abhorrent behavior is not a recent phenomenon. In May of 2017, during his first term in the statehouse, he became the first House Representative in the history of Alaska to be censured with a 25-14 vote. His racist, sexist comments towards Alaska Native women that caused him to be censured came from an interview with Alaska Public Media around abortion where he stated: “You have individuals who are in villages and are glad to be pregnant, so that they can have an abortion because there’s a free trip to Anchorage involved.”

In April of 2017, Eastman was the sole representative to vote against a holiday for Black WWII veterans who helped to build the Alaska Highway that connects the state to Canada. He opposed the state singling out Black soldiers’ contribution.

Eastman is a lifetime member of the fascist Oath Keepers organization, a group that actively recruits military members and police and whose leader was recently sentenced to 20 years in prison for seditious conspiracy due to his contributions to organizing and planning the Jan. 6 insurrection. Eastman, who has publicly declared his unwavering loyalty to the Oath Keepers, was present at the insurrection.

Many agree to expel Eastman — why is he still in office?

Twenty-seven votes are needed to expel Eastman; activists say they are sure of 24 “yes” votes. Even though Eastman has a widespread reputation within the House as a white supremacist, he currently faces no official reprimand from his peers.

The state government’s refusal to take action to condemn Eastman through either expelling him from office or stripping him of committee assignments is particularly egregious and indicative of the House’s complicity with fascism, as there is already a codified framework for the expulsion of a House member. Under Article XII Section 4 of the Alaska Constitution, it states that:

“No person who advocates, or who aids or belongs to any party or organization or association which advocates the overthrow by force or violence of the government of the United States or of the State shall be qualified to hold any public office of trust or profit under this constitution.”

In addition to this, there is a clear procedure to expel a member of the House, outlined in Rule 49, Section 2 of the Alaska State Legislature Uniform Rules which would allow the House to expel Eastman with a two-thirds majority vote. There is precedent for this process — legislator George Hohman was expelled in the 1980s.

Right-wing defenders of Eastman in the legislature, like the Republican Speaker of the House Louise Stutes, say that attacks on Eastman are a “distraction” from real issues. Others, like Bob Bird, the chairman of the Alaska Independence Party, seek to defend Eastman against “tyranny” and the “Leftist-mainstream-Marxist-Democratic Party,” putting Eastman alongside others that have been “demonized” and “falsely discredited” like Kyle Rittenhouse.

Despite public pressure, Democrats have as of yet failed to move meaningfully against Eastman. According to multiple representatives, the Democratic House majority thinks that a failed House vote will vindicate and embolden Eastman.

The Coalition to Expel David Eastman argues that not holding a vote is more of a vindication than anything. In fact, the failure to hold a vote emboldens Eastman and other fascists in Alaska and around the country. A vote would be useful for activists who say it would force representatives to choose a side between fascism and anti-fascism in the Alaska statehouse.

The Democratic majority is led by Representative Chris Tuck, who insists on giving Eastman “due process” — something that Eastman does not have the right to, as he is not being convicted of a crime. Rather than holding a vote, Tuck and others have backed away from any meaningful action, instead holding two “informational hearings” on the Oath Keepers to determine something the public already knows — that David Eastman is a member of a fascist, seditionist organization and is therefore unfit for office under the Alaska Constitution.

In response to criticisms at the town hall on Feb. 12, Rep. Tuck stated, “right-wing extremism is protected by the U.S. Constitution, whether you like it or not.” When asked to clarify comments that he made in the town hall which seemed to equate the protests against racist police terror and the January 6th insurrection, Tuck clumsily doubled down on his comparison, saying,

While the Coalition to Expel David Eastman has been lobbying legislators and working to educate the public on the crisis of fascism, the conditions it arises from and the genocidal threat it poses, elected officials have so far been unwilling to counter this threat with the decisive action it requires. More and more Alaskans are joining the fight against fascism in the state, which is essential as right-wing populism and fascism are on the rise.

Recently, fascists “zoom-bombed” a community council meeting in Anchorage with pornography and homophobic, sexist and racist images and words. This tactic has also been used by fascists against the Anchorage Assembly and Anchorage School Board. Last year, anti-mask radicals regularly flooded Anchorage Assembly meetings, threatening politicians and donning stars of David. The far-right mayor of Anchorage described the tactic as a “credit to Jews.”

Anti-fascist activists like those in the Expel Eastman campaign and the PSL point to recent Alaskan history to explain the roots of fascism in the state. Alaska, the second-youngest state, is in essence a colony of the U.S. that was occupied by settlers as an expression of Manifest Destiny and integrated as a state during the height of the Cold War. It is highly militarized as part of the broader U.S. campaign for “great power confrontation” against Russia and China in the Arctic. Indigenous people, who have no reservations and few rights in the state, are super-oppressed. Other working-class Alaskans are forgotten in the face of oil and energy barons, who run much of the state’s politics and made Alaska Senator Lisa Murkowski the 3rd-highest recipient of oil and gas money in the Senate. This lack of democracy allows fascists like David Eastman to gain a foothold in Alaskan politics with a small amount of support.

The effort to expel Eastman, for coalition members like the Party for Socialism and Liberation, is part of a larger movement to smash white supremacy and end the suffering of oppressed people in both Alaska and across the U.S. The rapid, widespread support for the campaign — in the face of both cowardly Democrats and fascistic Republicans in the House — is a bellwether for a growing movement for people’s power and socialism in Alaska.

Rep. Jamie Raskin: ‘We’re living in a time of trauma’

The Year of the New Normal Fascist