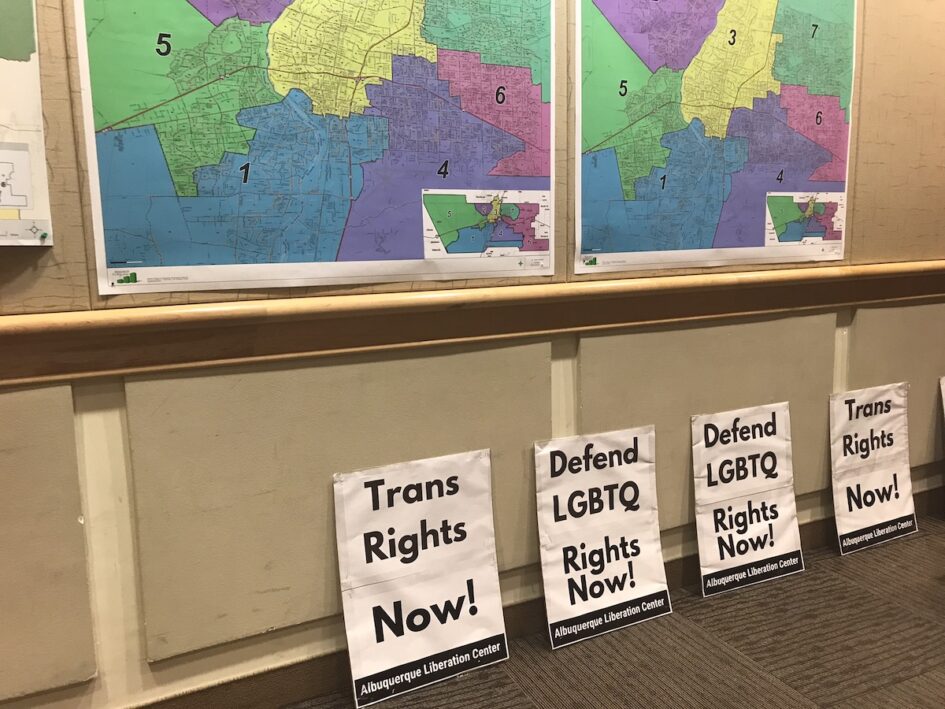 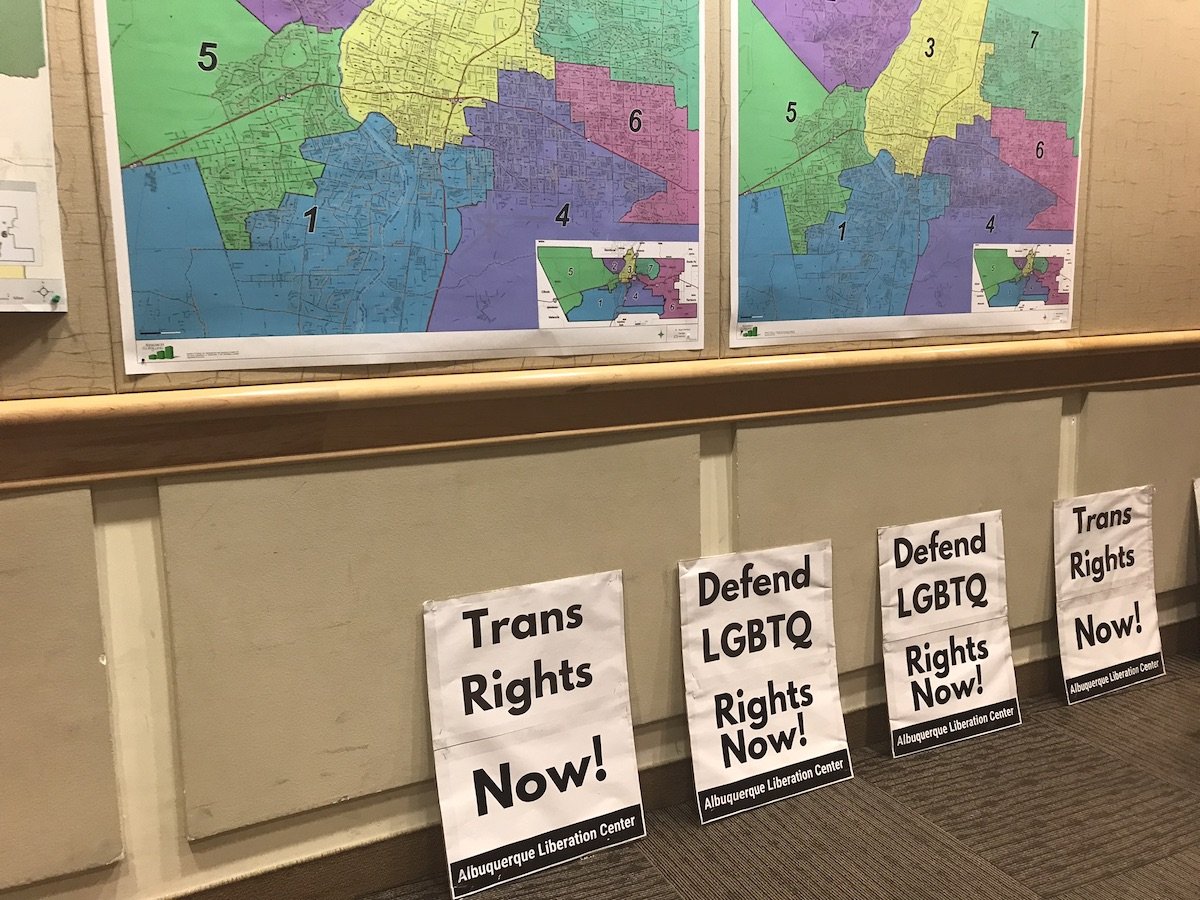 In July 2022 Albuquerque Public Schools board member Courtney Jackson proposed a new school policy — KB1, or “Parent Rights and Responsibilities.” Jackson’s original version of KB1 would have given parental access to all confidential records like counseling notes and Gender Support Plans.

On November 17, a community of educators, students, members of the teacher’s union, Albuquerque Teachers Federation, and Albuquerque Liberation Center activists spoke out against the dangerous KB1 language at the meeting. Because of this fierce public resistance, the Board of Education removed harmful language from this policy proposal that would have forcefully outed LGBTQ students.

This attempt by board member Jackosn is reflective of a national strategy of the right wing to force retractions on democratic rights through a stranglehold over local and state governments. These are the same forces pursuing local school board positions to create policies that ban books or curricula covering racism or LGBTQ rights.

Where did KB1 come from?

The homophobic and transphobic KB1 version was especially supported by the ultra-right-wing group Moms for Liberty (also known as M4L), which used inflammatory transphobic and homophobic rhetoric to speak in favor of it. Although the group touts itself as “grassroots,” M4L is a national, well-funded right-wing group founded by elite right-wing operatives supported by far-right politicians and other wealthy donors. M4L has close relationships with the Trump family, Florida Governor Ron DeSantis, Kentucky Senator Rand Paul, PragerU, Parents Defending Education, The Heritage Foundation and Steve Bannon.

The group is a haven for white nationalism. Founded in 2021, M4L has grown to more than 100,000 members in some 200 chapters across 38 states. It is set on strong-arming reactionary policies through local school boards, as one-time Trump strategist and rich white nationalist Steve Bannon stated on his podcast last year: “The path to save the nation is very simple — it’s going to go through the school boards.”

KB1 was influenced by the precedent of Florida’s “Don’t Say Gay” bill — HB 1557 — passed into law earlier last year. Despite having little support in the broader population, Florida’s “Don’t Say Gay,” a so-called “parental rights bill,” has quickly spread to other states. Inspired by Florida, reactionary groups like M4L and right-wing radicals are trying to introduce similar anti-LGBTQ policies through school boards all around the country from Arizona to Tennessee.

The policy language of KB1 is similar to the right-wing academic transparency laws being pushed across the country by extreme right organizations like the Goldwater Institute. Building on initial success in Florida and Arizona, the organizers and donors expanded the attacks to teachers’ unions, budget cuts, and moving public education funding to support charter schools, vouchers, and other privatization efforts.

In total, nine states have passed right-wing education laws. This past November, the Berkeley County School District Board of Education in South Carolina, within just two hours of six M4L-endorsed board members being voted in, fired its first Black superintendent and banned the use of what they claim is critical race theory.

When not haranguing school boards, M4L adds titles to a growing list of banned books. The group is one of several that have targeted literature for merely being sympathetic to LGBTQ causes. The growing number of books targeted for banning in 2021 correlates directly to the rise of M4L. M4L is often dismissed as only a fringe group, but it has developed powerful political and wealthy connections to secure campaign wins.

In 2022, M4L endorsed candidates who won board seats in three other South Carolina counties, plus more seats across Florida, Indiana, Minnesota and New Jersey. Overall, there were 270 M4L endorsed candidates in 2022 alone. Over the summer, M4L held a summit that laid out its long-term strategy. At the summit, former U.S. Secretary of Education and billionaire, Betsy DeVos spoke to the crowd about the need to “end the U.S. Department of Education.”

What’s next in Albuquerque?

Although the APS board removed the anti-LGBTQ language of the KB1 policy, the threat that Moms for Liberty poses to New Mexico public education and to public education everywhere must be taken seriously. This organization not only intends to elect its endorsed candidates to dominate school boards but to ensure that reactionary educational policies are enacted. APS BOE elections will be held next fall in 2023. In December, board members approved a redistricted map that could disenfranchise Latino voters in the upcoming APS BOE election.

This development could allow M4L to add their endorsed candidates to an already conservative AND PACs-funded majority school board to secure strong-arming reactionary policies. On its own, without M4L influence, the APS school board has pursued anti-teacher and anti-union measures. In August, the board violated Public Employee Labor Relations law by tabling the Negotiated Agreement of the teacher union, ATF. More influence of M4L on the APS board will only embolden them to push more bigoted and anti-union policies.

The harmful language of the KB1 policy has been beaten back by the grassroots movement of educators, families, students, and militant organizers. The fight for a public education free of LGBTQ bigotry is a national struggle against a broader attack on fundamental democratic rights, from voting rights to marriage equality.

Fighting for LGBTQ+ rights in China

From Impeachment to Proposal: Gabriel Boric and the Constituent Process

European Parliamentary Group of the KKE: People’s housing: ‘Green’, expensive commodity in the EU and capitalism. The communists’ proposal for a way out