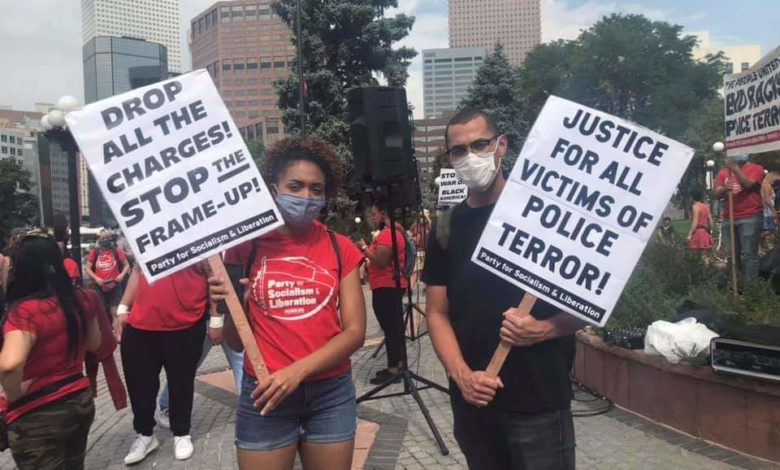 Today Arapahoe County District Attorney John Kellner dropped all twelve remaining charges against Joel Northam, Lillian House, and Terrance Roberts. These twelve charges were the last standing in the massive political prosecution launched against the leaders of the protests in Aurora, CO that demanded justice for Elijah McClain, a young musician and massage therapist brutally murdered by the Aurora police and paramedics in August 2019.

The political prosecution began nearly a year ago to the day on September 17, 2020 with the coordinated arrest raid on peaceful protest leaders Russell Ruch, Lillian House, Joel Northam, Eliza Lucero, and Terrance Roberts. Large teams of armed police were sent to arrest the activists at their homes, while driving, and while jogging. Three of the lead organizers, Eliza Lucero, Joel Northam, and Lillian House were held in COVID-ridden jails in near-solitary confinement conditions for eight days without explanation.

While refusing to take action against the police who murdered Elijah McClain, two Aurora district attorneys, Dave Young of Adams County and George Brauchler of Arapahoe County, together brought a staggering list of false charges against the protest leaders, including kidnapping charges for holding a peaceful sit-in outside of a police station. The activists faced potential sentences as great as 48 years.

What was clearly intended as a terror tactic to silence the movement that was bringing unprecedented national and international attention to the police murder of Elijah McClain, has only further exposed the corruption of the Aurora Police Department and the Aurora District Attorneys who shield killer police from consequences.

Unified fight-back made the difference

Immediately following the arrests, people across the country and around the world responded in support of the targeted organizers. Within 48 hours of the arrests, a thousand people marched on the Denver City Jail demanding the release of the imprisoned activists. Organizations around the world, from South Africa to Ireland to Latin America, published statements condemning the repression in Aurora.

The Denver Area Labor Federation unanimously passed a resolution condemning the prosecution and calling for all charges to be dropped. Their decisive action set the example for hundreds of unions and labor leaders from around the country who followed suit, signing onto or passing similar resolutions.

We, the National Committee for Justice in Denver, came together as concerned people from a wide variety of backgrounds—constitutional rights lawyers, community leaders, clergy, labor leaders, and more—recognizing that the implications of this case would be tremendous. The prosecution of these activists for daring to lead peaceful demonstrations against those in power, if successful, would strike a blow to First Amendment protections everywhere in the country. Abusing prosecutorial power to level felony kidnapping charges against people engaged in peaceful sit-ins outside police stations posed a threat to the millions of people peacefully protesting against racist police violence nationwide. In the following months, hundreds of people took part in forming local affiliates of the National Committee for Justice in Denver in their cities and towns to generate wider awareness of the political prosecution and its potential impacts.

The targeted organizers met the attack with unbending courage and refused to take a plea, forcing the prosecution to either drop the charges or prove them in court. The national and international support ensured that a trial would not play out in the dark. Together, this powerful counter-offensive is what defeated the repressive attack of the Aurora Police and prosecutors.

That not a single charge of the original 68 stands today represents a tremendous victory. The resources that went into this campaign are colossal: The Aurora Police Department concocted affidavits over 30 pages long against the activists; they used informants and fabricated evidence against them; they surveilled them; they secured warrants to break into their phones and social media accounts. Today’s complete victory shows that even when facing powerful forces of repression, the unified struggle of the people can win.

Thank you to everyone who has supported the defense of these organizers. The amazing response from across the country and around the world has been decisive in getting us to this point today.

Moving forward, investigation needed into the actors involved in the corrupt prosecution

On September 1, 2021, the core demand of the protests was realized when Colorado Attorney General Phil Weiser announced a 32-count indictment against the police and paramedics who murdered Elijah McClain. The arrested organizers played a pivotal role in leading and sustaining the two-year struggle which forced the state to open the independent investigation and maintained close vigilance as it proceeded.

This indictment exposes the sham investigation of the Aurora Police Department and the decision of former District Attorney Dave Young not to pursue charges against the killers. It emboldens the people of Aurora, Colorado, and beyond to continue organizing for police accountability. This outcome is precisely what this prosecution sought to prevent.

Abuse of prosecutorial power allows the police to operate with impunity. Police know they can rely on prosecutors to protect them from accountability and punish those that demand it. Communities are not safe so long as the police and prosecutors feel they can abuse the law and their offices without consequences. There must be an investigation into the various forces who may have had a hand in planning and carrying out this corrupt prosecution: the Aurora Police Department, Aurora Police Chief Vanessa Wilson, the Aurora Fraternal Order of Police, former Adams County District Attorney Dave Young, former Arapahoe County District Attorney George Brauchler. There must also be an investigation into the Denver Police Department, Denver Sheriff’s Department, and Adams County Sheriff’s Department who aided in the execution of the arrest and prolonged jailing of these organizers.