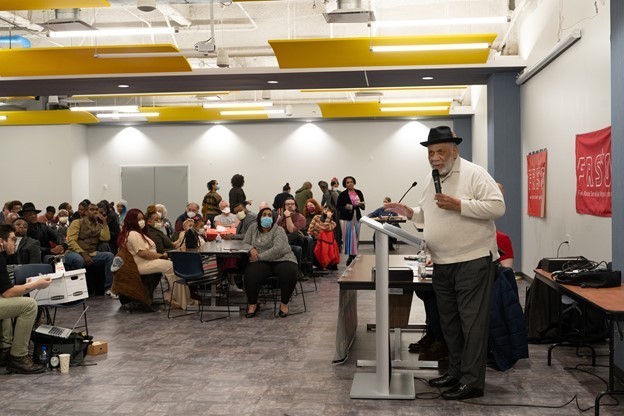 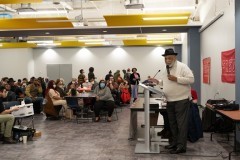 In the 18 months since Chicago reached a turning point with the passage of the Empowering Communities for Public Safety (ECPS) ordinance, the coalition that won the ordinance has fought against the obstruction of the mayor and pro-police members of the city council to implement it. The current stage in the fight against police tyranny is the elections for the local office of police district council coming up on February 28.

Freedom Road Socialist Organization calls on all progressives to be a part of the next step forward in the history of liberation struggles for Black people and other oppressed nationalities by getting out the vote for pro accountability candidates.

ECPS was won by a broad coalition of progressive organizations representing diverse sectors of the working-class and oppressed communities. The ordinance established a citywide Community Commission for Public Safety and Accountability (CCPSA) with the power to set Chicago Police Department (CPD) policy, give input into the budget and the hiring and firing of CPD leadership.

The current CCPSA is an interim Commission nominated by the city council and selected by the mayor. Future Commissions will be nominated by the district councils, who will also have the task of gathering the ideas and experiences of the people in their districts regarding the police. Throughout 2022, the ECPS coalition searched for district council candidates interested in holding the police accountable. Over 100 candidates, mostly Black, brown and working class, stepped forward to run. The coalition helped them gather petition signatures to get on the ballot, and now over 60 pro-accountability candidates are on the ballot for February.

Candidates who are running to expand democracy and hold police accountable are up against those backed by the Fraternal Order of Police (FOP), who want to protect the status quo of police killing and torturing oppressed people with impunity. Fortunately, the FOP-backed candidates are vastly outnumbered by pro-accountability candidates. However, the FOP represents the white supremacist ruling class, which has far more money to put into elections than progressive organizations do. In order for our advantage in numbers to overcome the FOP’s war chest, we need the active participation of as many people as possible in the upcoming elections.

The passage of ECPS was a massive step towards Black and indigenous people, Chicanos, immigrants and other oppressed people being able to democratically govern their own communities. We encourage all people who want an end to police tyranny to get involved in this fight.

We call on the people not only to vote for pro-accountability candidates on February 28, but also to help mobilize voters whether or not they themselves are eligible to vote. We all have a part to play in determining who polices our communities and how our communities are policed. We have a world to win and nothing to lose but our chains.

Go to http://chicagoecps.com to find out who’s running in your district.

Go to https://www.caarpr.org/volunteer to get involved in mobilizing people to vote.

As Omicron rages, teachers and students fight for safety measures in Chicago and elsewhere

The Eyes of Texas and the Nays

A red under every bed? Canada, racial profiling, and the Five Eyes

Elon Musk’s Takeover Through The Eyes of Twitter’s Janitors