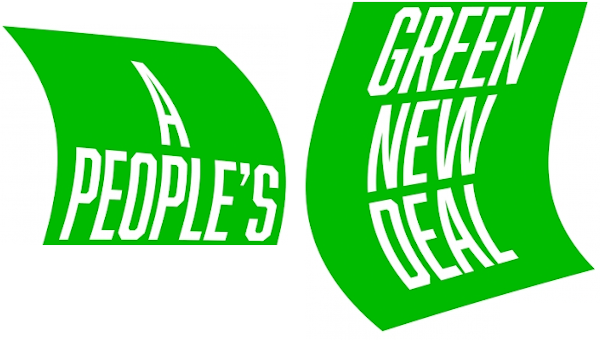 Max Ajl has written an exceedingly important and powerful book, a uniquely comprehensive report about climate change, its politics and injustices. The book, A People’s Green New Deal, (Pluto Press, London, 2021), eloquently details how the predominant solutions, including the AOC-Markey Green New Deal, are not geared to the hastening pace of global climate change’s human impacts or the global political and economic hegemony of the capitalistic centre. These are enmeshed systems – how can there be eco-socialism under racist regimes, under settler-colonialism, or occupation by Israeli or US forces?

Ajl’s challenge and solutions need to be seen in the context of the 2018 urgent warning by the Intergovernmental Panel on Climate Change (IPCC) about 1.5°C being the upper limit of human adaptability. Since then, there has not been a single global mandatory reduction of greenhouse gases, and the latest leaked scientific report indicates that current trends will mean a 3°C rise this century, at best. The international and national institutions are failing on many counts.

Here is a selection of Ajl’s observations. His attention to interacting categories and to conceptual tools to capture the whole picture (like human history, production externalities and life-cycle analysis, the outsourcing of labour and emissions, carbon emitters and carbon sinks, the Kyoto exemptions) merit a careful reading of the entire book. Given the worsening climate, military, and humanitarian calamities, overturning capitalism is urgent.

In his close reading of many green new deals, Ajl asks if these agendas are for

“governing capitalism, or for destroying it… If the answer is the former, pragmatism and realism can become firehoses dousing in despair the flames of revolutionary hope. If the answer is the latter, as it should be, the questions of ‘realism’ should be dismissed as ideological counterinsurgency against those who not merely hope for, but need, a better world” (p.4).

Green new deals unconscionably leave out climate debt, and if anything, propose only limited cutbacks to the military, and often omit agriculture. They are broadly Eurocentric and “rest on continued global inequality … feasible is the watchword of reaction and a talisman of oppression” (p. 12). He identifies the nullifying words and truisms: blaming humanity vs blaming fossil capitalism; managerial corporate/state partnerships that increasingly render the majority population powerless and superfluous; national security (meaning military rule), growth path, sustainability, and development; “technobabble” like the information economy and the internet of things; the GDP conflated with individual security and well-being. The Climate Finance Leadership Initiative (CFLI) made up of the wealthiest and most powerful private interests is typical of how public financing leads to private profit.

With regard to energy itself, Ajl again falsifies prevailing assumptions and fills in common omissions by green new deal proponents and environmentalists across the political spectrum. The various carbon budgets give estimates of how much CO2 can be emitted within a time frame ranging from several years to the end of this century. An unstated corollary of these budgets is that economic activity can continue as-is until a substitute source of energy is in place, that reduction and elimination of greenhouse gases can be postponed, and that economic profits will not decrease and might even increase with proper investments in alternative sources of energy.

Another blind spot is that only some sectors of productivity are counted, omitting major emitters like agriculture with its enormous greenhouse gas footprint, the military, and the energy required to provide the alternatives. Ajl lists metal and mineral extraction in the Global South that is required for alternative energy. This continues to lead to immense loss of life and ways of life, destruction of carbon sinks and of vital resources like water, forests, and soil. Batteries are a deceiving delusion, not a solution.

Ajl presents one logical option, rarely mentioned, of adapting work and production to when energy is available – which means adjusting hours of work and the pace of productivity, stopping production when alternatives to damaging sources of energy (fossil fuels, nuclear reactors, enormous dams, biofuels) are unavailable, and considering very carefully what products are essential within specific geographical regions and societies. Trade, which relies on outsourcing, ruinous labour practices, and on Kyoto-exempt high-emitting aviation and shipping, would no longer be a quick fix to maintain high-energy consuming life styles.

Also, under-reported in most climate-change solutions, including green new deals, is land use and the agriculture sector even though there is immense experiential, practiced, researched information about the ecological provision of food in every geographical region. This knowledge directly counters the claims made by the agro-industrial-pharmaceutical-monoculture complex. Agriculture is a puzzling omission because it is well known that the agro-capitalist monopoly is unhealthy to people, destroys farming societies, and requires enormous fossil-fuel inputs and is one of the biggest carbon emitters. As well, that practices like biofuel production and mining (to produce so-called ecological forms of energy) require vast deforestation and soil erosion (carbon sinks). Ajl credits farming societies’ Cochabamba and the Landless Peasant Movement with offering a genuine, workable People’s Green New Deal.

The Cochabamba Agreement came together in response to the 2009 Copenhagen Climate meetings and the transparent failure of national leaders to come anywhere close to addressing, much less acknowledging, the human emergency. Six years before the Paris meeting warning of disastrous human impacts, it was known by the people’s climate summit that even 2°C rise in temperature was catastrophic. Ajl quotes the Agreement, and I quote from the conclusion because it is already unknown or ignored:

“The future of humanity is in danger, and we cannot allow a group of leaders from developed countries to decide for all countries as they tried unsuccessfully to do at the Conference of the Parties in Copenhagen. This decision concerns us all. Thus, it is essential to carry out a global referendum or popular consultation on climate change in which all are consulted regarding the following issues; the level of emission reductions on the part of developed countries and transnational corporations, financing to be offered by developed countries, the creation of an International Climate Justice Tribunal, the need for a Universal Declaration of the Rights of Mother Earth, and the need to change the current capitalist system.”

Their first demand was fundamental: “the right to live and to exist.” The second is an obvious imperative: “for the hundreds of millions of people that will be forced to migrate due to the climate change caused by these [privileged Western] countries, and eliminate their restrictive immigration policies, offering migrants a decent life with full human rights guarantees in their countries.” The Cochabamba people’s summit demanded “payment of debt related to the impacts of climate change on developing countries by providing the means to prevent, minimize, and deal with damages arising from their excessive emissions.”

Ajl’s crucial analysis of this extremely complex political/ecological juncture and his recommended solutions are critical for us to understand before it is too late. There are almost day-to-day backward steps on the political side, yet increasingly, urgent science warnings about cascading and irreversible tipping points are still procrastination and empty words. Climate debt is only part of what is owed – IMF Structural Adjustment Program debt is another that must be abolished. Settler colonialized people require compensation and self-determination, but decolonized nation states fail the different nations within their borders, even to the point of genocide. The original leaders of decolonization recognized the global economic imperialism and the requirement of a global abolition of capitalism.

The United Nations is constricted by nation-state sovereignty and fails to implement its original charter, its declarations, and its resolutions. The UN continues to evolve into a neoliberal government/corporate structure with no representation of people. The IPS’s A Long Food Movement reports that:

“‘Multi-stakeholderism’ is everywhere as corporations – sensing the social and environmental tipping points ahead – seek to draw governments, scientists, and a handful of civil society organizations into an artificial new multilateralism… The keys of the food system are handed over to the biodigital mega-corporations, data platforms, and private equity firms who – thanks to proliferating merger deals – become tomorrow’s agrifood giants… For all of the shortcomings of the multilateral institutions, CSOs are unified in their resolve to avoid corporate capture of the UN and its Rome-based agencies (RBAs) – starting with mobilizations around the contentious 2021 UN Food Systems Summit [September, 2021].”

“The wealth of nine of the country’s top titans has increased by more than $360-billion in the past year,” while the WHO, WFP, FAO, and UNICEF received only $1.9-billion of the $3.4-billion required to feed 3.5 million starving Yemeni people. The multi-stakeholders who aim to obtain decision-making power in the upcoming UN Food Summit are also the people who blocked the waiving of the intellectual property COVID-19 vaccine patents, leading to millions of deaths.

Judith Deutsch is a member of Independent Jewish Voices, and former president of Science for Peace. She is a psychoanalyst in Toronto. She can be reached at [email protected]