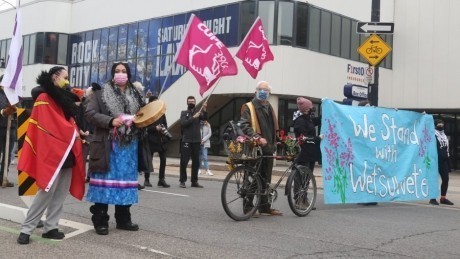 They had occupied the drill site at the edge of the river Wedzin Kwa to halt the CGL pipeline before it could destroy these pristine headwaters, on the authority of the Wet’suwet’en Hereditary Chiefs who issued an order to enforce the eviction of CGL workers from Wet’suwet’en land proclaimed on January 4, 2020. The sovereignty of the Hereditary Chiefs over their territory is based on continuous occupation and utilization of the lands for tens of thousands of years, which was never ceded or conquered. In 1997, the supreme court of Canada recognized this sovereignty, but in practice it was and is ignored. The federal and provincial governments obtained approval from a majority of Wet’suwet’en elected band councils for a pipeline that does not cross reserve land, where their authority lies under the colonial system imposed under the Indian Act. The BC courts have issued injunctions against blocking the pipeline as if the constitutional question about Wet’suwet’en sovereignty didn’t exist.  And finally, the RCMP have enthusiastically enforced the injunction for a project in which RCMP pension plans are heavily invested.

Just like in January and February, 2020, solidarity actions started across the country, but in a context that has been forever changed in the intervening period. The Covid-19 pandemic conditions, the explosion of the Black Lives Matter movement globally after the killing of George Floyd and the confirmation of Indigenous genocide after the finding of many graves of Indigenous children at the sites of former Indian Residential “Schools” have all exposed deeper faultlines that can no longer be hidden.

As soon as it was known that Skyler Williams and Logan Staats had been arrested, 1492 Land Back Lane from Six Nations of the Grand River organized a blockade of the Highway 6 Caledonia bypass, also blocking the CN rail line through their treaty territory.

On Friday, November 19th there were more actions across so-called Canada: a rally protested the violent arrests in front of the Burnaby RCMP office; hundreds rallied at the Victoria Courthouse; a solidarity rally was held in front of the Vancouver City Hall; in Winnipeg a rally at the corner of Portage and Main then marched to the Manitoba legislature; in Toronto, a rally and march of over 200 took over the lobby of the Royal Bank Plaza where TC Energy, a primary investor in the CGL pipeline, has their offices for a spirited rally and delivered a Wet’suwet’en Hereditary Chiefs eviction enforcement notice.

On Saturday, November 20th, Indigenous land defenders and warriors from Winnipeg lit a fire near the rail at Diamond, MB to shut down the line in solidarity with Wet’suwet’en. In addition, there were more actions in Aamjiwnaang (Sarnia), Nogojiwanong (Peterborough), Regina, Guelph and another rally and street closure that brought out 250 people to Spadina and Bloor in Toronto.

On Sunday, November 21st, hundreds shut down Bay street in front of the federal building in Hamilton and painted “All Out For Wedzin Kwa” in pink on the pavement. In Halifax, a spirited rally took place in front of the Halifax Police Service. In Toronto, hundreds more showed up and shut down the rail lines between Dupont and Geary on Bartlett Avenue on Sunday, returning to the scene of one of the blockades from last February.

The violence of the RCMP was made clear on social media when Denzel Sutherland-Wilson, a Gitxsan land defender who was arrested last year at Gidimt’en Checkpoint standing up for Wet’suwet’en sovereignty during that RCMP invasion, was brutally arrested by RCMP officers – he can be heard on a video screaming “I can’t breathe” as an officer pins him to the ground with a knee on his neck – as they broke up a solidarity rail blockade on unceded Gitxsan territory.

International solidarity kicked in on Monday, November 22nd with a small, but spirited action outside Canada House in Trafalgar Square, London, UK. In the morning, Six Nations of the Grand River led a march from 1492 Land Back Lane into Caledonia and back. In Edmonton, after the rally, people marched, taking over the high level bridge downtown. There was a rally in Collingwood, a court support action in Prince George, a Hwy 17 blockade on Lekwungen territory (between so-called Victoria and the ferry to the mainland) and a 2 hour Montreal CP rail blockade of 100 people that disrupted service for much longer,

The actions kept rolling over in more places from coast to coast in the next day: rallies in Fredericton and Calgary, an Ottawa highway blockade, a blockade of a Shell facility in Hamilton and a small rally in Whitehorse. On Wednesday there were rallies in Saskatoon, Lennoxville/Sherbrooke and a Rolling Wet’suwet’en Solidarity Blockade, where separate rolling blockades from Six Nations, Tyendinaga and Akwesasne slowed traffic on the 401 from Caledonia to Cornwall, and then the convoys met up at the Tyendinaga Pow Wow grounds followed by a Saint John, NB on Nov 25 and non-violent civil disobedience planned for Friday November 26th by XR Vancouver at Devonian Harbour Park at 7:30 am.

While all those arrested have now been released, expect actions to continue because nothing has fundamentally changed. This pipeline is a disaster for the climate, the Wet’suwet’en people and their unceded land. So actions in Solidarity with Wet’suwet’en will continue for the foreseeable future.

As well as big actions, smaller protests were held all over. In Lynn Valley, BC, 15 people with homemade signs and a banner picketed BC NDP MLA Susie Chant’s office, calling for RCMP to be called off the Yintah.

This Saturday there is a picket/rally in front of Liberal MP Julie Dzerowicz’s office in Toronto, a rally in Montreal by Divest McGill and the Coalition étudiante pour un virage environnemental et social (CEVES) at 4225 Boulevard Dorchester, which is the Quebec Divisional HQ of the RCMP, and an Abbotsford BC rally from 1-3 pm at Mill Lake Park. On Sunday, expect a bit larger rally outside Canada House in Trafalgar Square in London, UK.

All Eyes On Wet’suwet’en – protect the Wedzin Kwa