All-out strike is a go: scaffolders at Scunthorpe’s British Steel – News from the Frontline 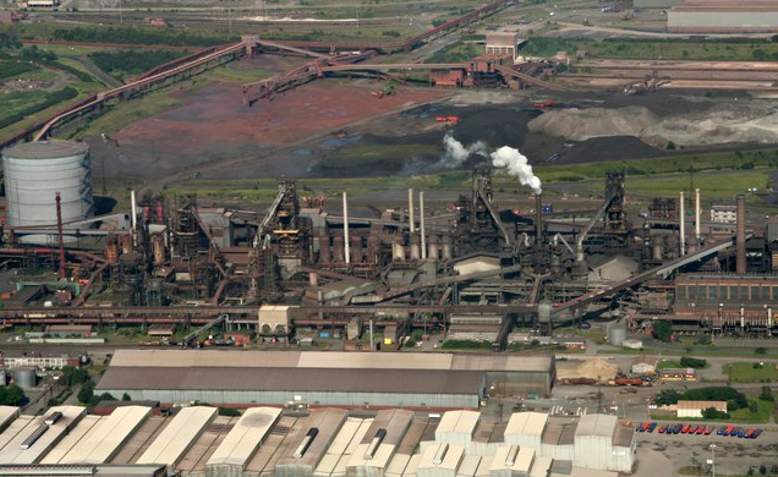 A two-year dispute between Unite the Union and subcontractor Actavo over scaffolders’ pay came to a dramatic head on Monday 4 October, as sixty workers walked off the job indefinitely.

The scaffolders are seeking parity with the National Agreement for the Engineering Construction Industry (NAECI). They are currently trailing by 15% behind the rates set by that agreement. One worker observed he’d had just one pay rise in his eleven years with the firm.

“Our members play a crucial role maintaining safety on the British Steel site and deserve to be paid the correct rate for the job.”

“All we are asking for is what we are worth. We want a proper pay structure instead of being ignored.”

This action looks pretty wildcat to News from the Frontline. Sometimes workers’ anger can’t be contained.

Lorry drivers at Hatfield’s Yodel depot are now receiving a hefty pay hike as part of a terms-and-conditions package secured by the GMB. Presumably, the 84% vote for strike action that was sitting on the table brought some clarity to the situation.

“This is a great outcome for our LGV1 drivers at Yodel who before this earned some of the worst wages, and endure less than satisfactory working conditions. By standing strong and together, GMB members have held Yodel to account and helped the company realise the true worth of LGV drivers.

“If anyone ever doubted the worth of being in a union, they need only read this story.”

It’s good to see a material result for workers emerging from the hue and cry of driver shortage. But we need more of them. Yodel are a big cheese in logistics, so let’s hope this reverberates.

Cleaners and attendants of the Royal Parks remain determined with their ongoing strike action. Counterfire’s Carole Vincent reported on their recent rally.

The rubbish piles up as Brighton bin drivers walk out

Drivers employed by Brighton council’s refuse and commercial waste service walked out on Tuesday after last-minute talks to settle the dispute collapsed. The workers represented by GMB union voted 100% for strike action on a 79.6% turnout to strike over unfair and discriminatory treament of drivers. GMB also announced a further two weeks of strike action following the current two week strike, showing that the workers are not planning to back down.

Within the first two days of strike rubbish was visibly piling up around Brighton and Hove. The Green-led council, having refused to provide a satisfactory solution for the workers, was called completely out of touch for asking the drivers to pause their strike to clean up ahead of the Brighton marathon this weekend.

This is another case of workers who are essential, and whose importance to the running of society has been shown clearly during the pandemic, being treated with contempt by employers and local government. A recent string of successes for refuse workers who have organised collectively in different parts of the country and the increased bargaining power of HGV drivers amid the nationwide shortage put the Brighton bin strikers in a strong position, and they deserve all our support.

Clarks workers put the boot in

Around sixty workers at the Clarks distribution centre in Somerset were on strike this week as they fight huge cuts to pay and conditions in yet another example of fire and rehire. Community Union, representing the workers, says staff face an average pay reduction from £11.16 to £9.50 as well as reductions in breaks, sick pay and redundancy.

The union says the changes primarily affect longer serving staff who are being pushed to accept a race to the bottom. The union’s general secretary, Roy Rickhuss says:

“Fire-and-rehire is no way to thank your employees or your customers. The workers most adversely impacted by these changes are those who have been employees for decades, sticking with the company through thick and thin, stepping up in the last year during the challenging pandemic period.”

Community Union is not normally first to mind when thinking of industrial action, but it’s good to see them play their part in the fight against fire and rehire.

The EIS and three other Scottish education unions have gone into dispute with employers over a pitiful pay offer. The unions rejected a 1.22% pay rise earlier this year because it was below inflation and a real-terms cut. They have heard nothing back from the Scottish government or the local councils, so they have been forced to register a dispute.

“It is completely unacceptable that nine months after our pay claim was submitted, Scotland’s local authorities and the Scottish Government have failed to respond with a reasonable pay settlement to Scotland’s teachers.”

“We are not the dirt we clean”: Facebook cleaners ballot to strike

Outsourced cleaners at Facebook’s London offices, employed by Churchill Cleaning, are to begin balloting for strike action over excessive workloads and the dismissal of their trade union rep. The workers represented by the Cleaning and Allied Independent Workers Union have said Churchill Cleaning has doubled the workload of cleaners at Facebook’s Brock Street offices since they took over teh contract in January and are beginning to make the same changes to the Rathbone Square offices.

One worker recently had to go to A&E as a result of the excessive workload she was given, and said her manager belittled and laughed at her when she raised her concerns beforehand. This was followed by the dismissal of Guillermo Camacho, the cleaners’ union rep and who had been central to organising several protests against the unfair treatment of the cleaners. His case will be heard by an employment tribunal on 21 October.

The cleaners have been protesting outside the Facebook offices, and will be protesting again on Friday 14 October outside Facebook London’s offices at 1 Rathbone Square, London, W1T 1FB. Please join them to show your support and donate to the Facebook cleaners’ campaign here.

Security guards and cleaners balloting to strike at GOSH

UVW Great Ormond Street Hospital Security Guards are balloting to strike, while the cleaners there are also balloting to demand the same pay and conditions as other NHS staff at the hospital.

The cleaners won a dispute earlier in the year to be brought in-house, but still have inferior pay and conditions to other staff. Security workers are demanding an end to outsourcing, and full parity with NHS staff. This could result in the cleaners and security workers being out on the picket line together.

This comes as UVW carers, cleaners, and maintenance workers at Sage Nursing home in North London will commence strike action on the 20 October. They are fighting for £12 an hour, sick pay and annual leave equal to that of NHS staff. You can donate to the Great Ormond Street Strike fund here and sign the petition here.

Strikes win: Anatomy of the University of Liverpool victory

Royal College of Art goes on strike: HE anger is spreading

Only one in ten of the teaching staff at this globally recognised art school have permanent contracts. These Kensington-based workers are not accepting the unacceptable, and have begun a rigorous series of strike days reflecting the severity of their grievances. A picket-line report will follow next week.

UCU, Unite and Unison Members will strike at Dundee University over pensions; 78% of Unite members voted to strike and will commence action on 25 October.

The university is changing its pension scheme from a ‘Defined Benefit Scheme’ to a ‘Defined Contribution Scheme’. The unions say workers on lower pay will be unable to retire on the new scheme.

Unite say the changes could result in a 50% cut to the pension income of the lower pay grades, and that most of these workers are women. Emma Beatt, the culture and projects officer at Dundee, explained that after 25 years of paying a pension, she was expecting she would retire on £11,000 a year, but with these changes she will be lucky to receive £6,600 a year.

“It is totally immoral, it’s an absolute scandal, for one of the employers in Dundee that are meant to be a decent employer, to treat their staff like that. It’s a two-tiered system and it’s an absolute disgrace.”

Ninety per cent of Unite NHS workers have voted in a consultative ballot to reject the pitiful 3% pay rise, with 84% ready to take strike action.

Unite are saying that this winter there will be targeted industrial action and days of protest continuing into 2022. The union suggests that they want to coordinate action with other unions, but that they will target areas and hospitals that have voted to strike in larger numbers. It has not been said when an industrial ballot will take place.

A national nurses’ strike may be on the cards, as the RCN, which represents 465,000 nurses, is conducting a second ballot, this one an indicative ballot. The consultative ballot showed that 92% of nurses were willing to fight for a 12.5% pay rise.

GMB says it is going to hold a strike ballot, after 93% of its members rejected the pay insult in a consultative ballot. GMB is demanding a 15% rise.

After 80% of Unison NHS members voted against the 3% in a consultative ballot, Unison are going to hold an indicative ballot.

With inflation projected to hit 7% in the spring, and families facing a hungry winter, what is needed is industrial ballots and coordinated national action across all unions.