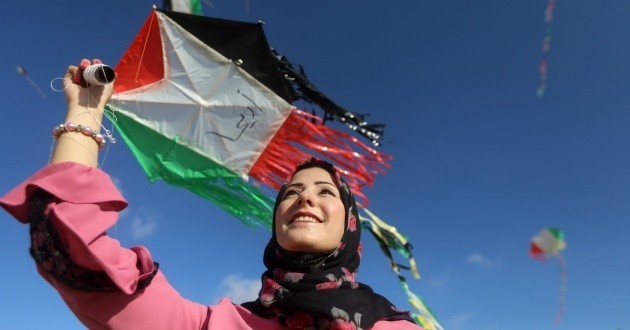 Louisa Waugh speaks to activists in Israel and Palestine working together in the name of peace.

Tuly is late for our call and when he does join us, is slightly out of breath. He has just rushed home after visiting his parents. ‘I hadn’t seen them for 18 months because of Covid and it was my mother’s birthday yesterday,’ he says.

‘Ah, you saw your mother,’ exclaims Rana. ‘Happy birthday to her!’

The remarkable thing about this exchange is how ordinary it sounds. We are on a three-person WhatsApp call and each of us in a different country. Rana is in the city of Bethlehem in the Palestinian West Bank, and Tuly is at home on the outskirts of Tel Aviv. I’m in the city of Brighton, on the south coast of England.

Rana does not leave home much at the moment: the Israeli military are aggressively restricting Palestinians from moving in and out of the West Bank even more than usual, after weeks of protests in and around Jerusalem. Meanwhile, 20 miles from Tuly’s home, the small Israeli city of Lod was recently the epicentre of communal street violence, unleashed after Israeli attacks on Gaza. Yet Rana and Tuly greet each other if not exactly as friends, like friendly colleagues.

Until recently, Rana Salman worked as an activist tour guide. She spent 10 years leading alternative tours across the West Bank, educating visitors about the realities and injustice of the military occupation. Then the pandemic struck and the tourists stopped coming to Bethlehem.

Tuly Flint trained as a social worker specializing in mental health, primarily for military personnel. He is also a Battalion Commander with the Israeli Defence Force (IDF). Though he left his full-time post with the IDF in 1992, he is still an army reservist.

Both Rana and Tuly work for Combatants for Peace (CFP). Rana describes it as, ‘a grassroots movement of Israelis and Palestinians working together to end the occupation.’

CFP has an office in the West Bank and another in Israel (ironically, in Lod). Rana is the Executive Director of the Palestine office. ‘I joined CFP because I wanted to carry on my activism,’ she says. ‘The separation between Israelis and Palestinians is so extreme, most people have never met someone form the other side, and certainly don’t know or understand their experience.’

Tuly, who coordinates CFP activities in Israel, has lived a very different trajectory. When he was a teenager, his family moved to an Israeli settlement in the West Bank. He willingly did his military service with the IDF and was dispatched to Gaza during the first intifada when he was ordered ‘to break hands and feet’. He didn’t follow that order. ‘I know and saw others who did,’ he admits.

In 2014, during the Right of Return protests, he returned to Gaza for the IDF offensive Operation Protective Edge.

‘I had been to Gaza maybe 20 times,’ he explains, ‘But [then] I witnessed plane bombings that turned the sky orange and red, the ground shaking, the suffering of the Palestinians and the [Israeli] soldiers.’ He was shaken to his core. ‘It was not an individual event that pushed me to be an activist: rather a continuum of suffering on both sides.’ He left Gaza vowing never to return to the occupied territories as a soldier.

A minority of Israeli NGOs have campaigned against the military occupation of Palestine for many years. Frequently maligned by the Israeli government as ‘traitors’ , these organizations are compelled to defend and explain their work.

‘For the majority [of Israelis] the idea is that Hamas is suddenly throwing rockets at us,’ says Dana Moss, International Advocacy Coordinator for Physicians for Human Rights Israel (PHRI).
‘They are not seeing the realities of the situation: the land grabs and dispossessions: these structural issues.’

PHRI campaigns for human rights, medical ethics and social justice. Their mobile clinics operate in the West Bank every week and are staffed by Israeli and Palestinian volunteers. ‘For some Israeli volunteers, going to the West Bank for the first time is a really transformative moment,’ Dana tells me. ‘They see for the first time what the occupation actually does to Palestinians.’

CFP uses actions bringing Israelis and Palestinians together to remind everyone of the terrible costs of the Israeli occupation. For the last 17 years, its members and supporters have commemorated Yom HaZikaron together. This Israeli Remembrance Day is officially marked as a memorial for Israeli soldiers.

On 12 July 2021, CFP will hold its second commemoration of the Palestinian Nakba (or catastrophe): this will be broadcast live from two locations, one in Bethlehem, in the West Bank and another in Israel.

Despite these initiatives, Rana acknowledges that Palestinians sometimes criticize Combatants for Peace for normalizing the Israeli occupation. ‘What gives us real credibility,’ she insists, ‘is [that] so many of our members are also former combatants.’

These combatants’ stories, like Tuly’s journey towards CFP, are compelling. Though officially still an army reservist, he has stuck to his vow of never returning to Palestine as a soldier, and is considered a refusenik by the IDF. But Israeli iconoclasts like Tuly need the trust and acceptance of Palestinians activists like Rana in order for CFP to work. ‘We can’t just be the Israelis who say we know it all,’ he admits.

Or, as Rana puts it at the end of our call, ‘Anyone can be a combatant for peace: it gives us the opportunity to work together to end the occupation, and to [finally] see each other as truly human.’