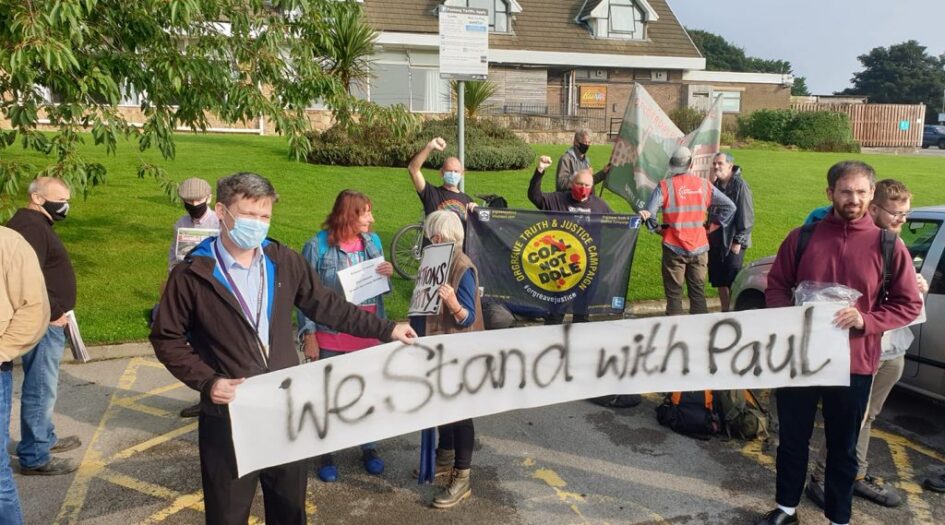 UNISON President Paul Holmes, a prominent left-winger, was been suspended by his employer during a strike two years ago on secret charges. UNISON has suspended Holmes and his branch. Sam O’Brien reports from a solidarity protest.

On Monday 6 September, 60 people gathered outside the Clarion Hotel in Huddersfield to show support for Paul Holmes at his disciplinary hearing. Over 100 people joined a simultaneous online rally. Holmes is the President of UNISON and has been the Branch Secretary of Kirklees Local Government UNISON branch for 30 years. He recently came second in the General Secretary election, taking a third of the votes cast.

Holmes was suspended by Kirklees Council in November 2019. None of the charges against him have been made public. At the time of his suspension Kirklees UNISON were balloting for strike action against the bullying of bin workers.

Nick Ruff, Chair of Kirklees branch, and Assistant Branch secretary Cath Kinder were both suspended by UNISON due to ‘serious and confidential issues’ at the same time. These issues have still not been made public.

Holmes has had support from John McDonnell who spoke at the online rally, Jon Trickett  and Richard Burgon have also expressed their support.

The hearing is set to last until the end of September. Every trade unionist and socialist should get behind Holmes’ campaign.