Anchorage unites against anti-maskers and the far right 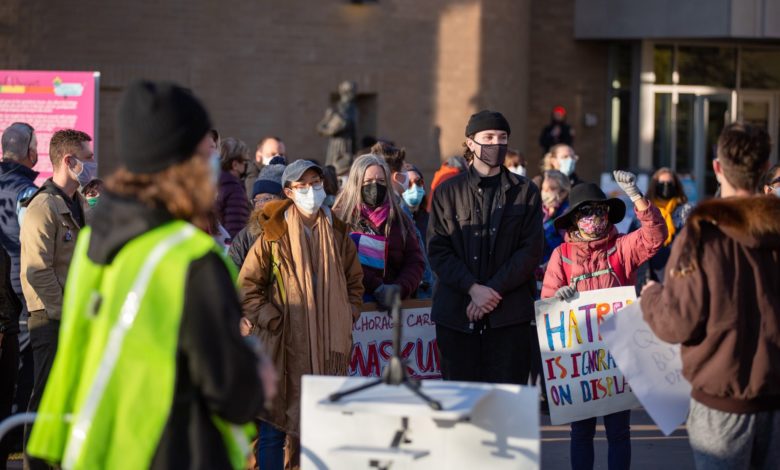 The Protest Against Hate, which saw a turnout of over 100 people, took place outside of the Anchorage Assembly chambers, where over the past two weeks a far-right mob has been filibustering a vote on a mask mandate at the encouragement of Anchorage’s bigoted, homophobic and anti-public health mayor. Notably, this far-right mob adorned Stars of David at one assembly meeting — an anti-semitic, historically insensitive act that mayor Dave Bronson declared to be a “credit to Jews.” Over the past six public hearings, reactionaries have turned the city’s public testimony on the proposed mask mandates into undemocratic hate rallies that have doubled as COVID-19 superspreaders, as the vast majority of those providing testimony attended the meetings unmasked. Their actions not only pose a health risk to the community, but have also deterred individuals who are in support of a mask mandate from testifying, particularly people of color who have been threatened by the far-right’s open displays of racism.

The objective of PSL and the coalition of organizations was to counter the far right and take a stand against the empowerment of reactionaries in Anchorage. The election of David Bronson in May has spearheaded this rise of the far right, and it resembles the rise of Trump through demagoguery and right-wing populism. As an alternative to the increase in right-wing presence at assembly meetings, the coalition aimed to empower members of the community by celebrating the diversity of Anchorage and showcasing the unity of the left. The protest began by decrying the historical expropriation of the Dena’ina people by capitalism and colonialism, and speakers touched on topics ranging from discrimination in schools, systemic racism, the redlining of Anchorage neighborhoods — and of course, the need for a mask mandate in the largest city in the state that recently had the highest rate of infection in the country.

The coalition was so successful in its goal of deterring right-wing opposition that not a single member of the Bronson mob showed up to the event — which was described in Must Read Alaska, the flagship news outlet for Southcentral Alaskan fascists, as a “socialist trap”. The assembly — with calm in their chambers for the first time in two weeks —passed an emergency mask mandate with a veto-resistant 9-1 vote.

The coalition action in Anchorage showed the power of the people in Anchorage in the face of the right-wing and anti-public health forces that imperil their lives. The activists pledged to continue to fight back against the dangerous incompetence of the Bronson administration and stand up against hate in Anchorage.