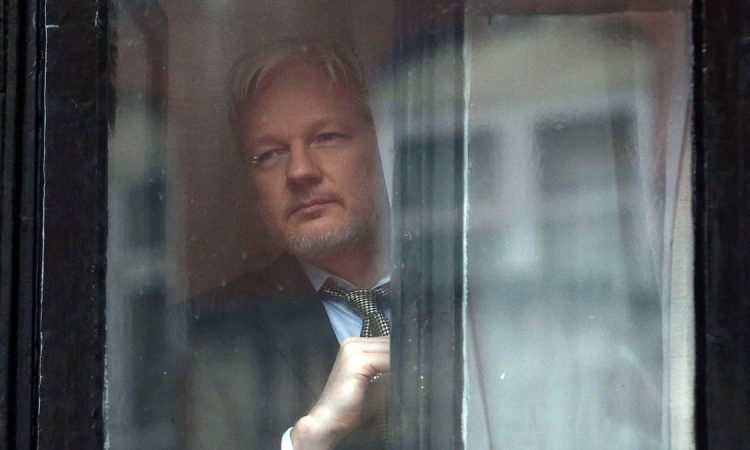 All those who oppose imperialism, or who seek freedom for the press to investigate and divulge details of the crimes against humanity regularly committed by our governments, or even who retain the vaguest adherence to notions of fairness and morality owe Yahoo News a vote of thanks.

For what? Quite simply for its unearthing of US/British plans, which were discussed at the highest level, to kidnap or assassinate Julian Assange – either inside the Ecuadorian embassy or outside in a London street if someone (possibly from the Russian embassy) were to try moving him elsewhere under cover of diplomatic immunity.

“There seemed to be no boundaries,” a former senior counterintelligence officer told Yahoo’s reporters.

Senior officials inside the CIA and the government of Donald Trump even went so far as to request “sketches” or “options” detailing how Mr Assange might be murdered. Discussions over kidnapping or killing him occurred “at the highest levels” of the Trump administration.

And at some point, their British counterparts must have been brought into the discussion, since it was agreed that any shooting, particularly on London’s streets, should be performed by British operatives.

Many of those who are familiar with imperialism’s blood-soaked history won’t be particularly surprised at these revelations, but they will shock those who still have some faith in the system; who still have some belief in the essential justness of our rulers and their political representatives.

This exposure is therefore extremely important to the work of unmasking the true bestiality of the present system and revealing its anti-nature, anti-human essence for all to see.

As a result of Yahoo’s article, many more people are now, partially at least, aware of the long history of vilification that Julian Assange has suffered since helping to found WikiLeaks on 4 October 2006.

Of course, even more would be aware if the story had received the kind of headlines in Britain’s mainstream corporate media that it deserves, but they have unanimously adopted the course of attempting to suffocate this vital exposure under a blanket of silence (or by burying it in small columns on the back pages, which comes to the same thing).

Although WikiLeaks was on the NSA/CIA radar from the start, Assange personally didn’t get much attention from US security agencies “until 2010, when WikiLeaks released gun camera footage of a 2007 airstrike by US army helicopters in Baghdad that killed at least a dozen people, including two Reuters journalists, and wounded two young children. The Pentagon had refused to release the dramatic video, but someone had provided it to WikiLeaks.” (Kidnapping, assassination and a London shoot-out: Inside the CIA’s secret war plans against WikiLeaks by Zach Dorfman, Sean D Naylor and Michael Isikoff, Yahoo News, 26 September 2021)

For the crime of having helped to reveal the murderous and robbing deeds of western imperialism to the world, Mr Assange was set up in 2012 on a false rape allegation (the alleged victim herself later claimed it hadn’t happened).

The charge was brought in Sweden and was used as a justification for arresting Assange in London so that he could be extradited to Sweden for trial. It was clear from the start, however, that US agents would be in Stockholm, waiting to whisk him away to the USA, there to be made an extreme example of in yet another attempt to stop the reputational damage being caused to imperialist governments by a string of brave whistleblowers.

Freedom of Information searches by the Italian journalist Stefania Maurizi reveal that Sweden tried to drop the Assange case in 2011, but a British Crown Prosecution Service (CPS) official in London told the Swedish prosecutor not to treat it as “just another extradition”. (Sweden tried to drop Assange extradition in 2013, CPS emails show by Owen Bowcott and Ewen MacAskill, The Guardian, 11 February 2018)

In 2012, when the Swedish government was coming under public pressure to drop a case that was clearly trumped up, the British CPS sent an email to the Swedes saying: “Don’t you dare get cold feet!!!” The sender of the emails remains unnamed, but the director of public prosecutions (DPP) who was running the service at that time was one Keir Starmer QC.

If Sir Keir wasn’t the actual sender, he would certainly have been aware of the email. Not coincidentally, many CPS emails from that particular period have been either deleted or redacted.

Assange was released on bail in London pending an extradition hearing. Instead of waiting for the rigged process to play out, however, he presented himself at the Ecuadorian embassy and asked for asylum. This was duly granted by the government of President Rafael Correa.

Along with increased healthcare spending and various other proposals aimed at improving the lot of Ecuador’s poor workers, this act of solidarity brought President Correa’s administration into the sights of US imperialism, which redoubled its efforts to undermine and depose him.

Rafael Correa was eventually brought down by false charges of kidnapping and corruption. He was locked up and replaced by a US placeman, the incongruously named Lenín Boltaire Moreno Garcés. (One assumes that the father who named him Lenin is today spinning in his grave.)

Even before the overthrow of President Correa, things were changing at the London embassy. A Spanish security company, UC Global, had been employed to protect the embassy in 2015. Without the knowledge of Ecuador, however, UC Global was also working for US intelligence.

Two former employees of UC Global, testifying in a Spanish criminal investigation, revealed that their boss, David Morales, had bragged about his influence with US security forces and told them that they might be required to leave a door unlocked to let in a snatch team, or that they might be asked to poison Assange themselves.

Morales had a plethora of high-tech cameras and listening devices brought into the embassy, so that Julian, who suspected what was happening, became unwilling to talk openly even to visiting friends without some sort of sound-blocker (a running tap, for instance).

The new designation of WikiLeaks as a ‘non-state hostile intelligence service’ meant that it no longer had to be treated as a group of journalists with human rights, the organisation and all its members were now to be treated as outright enemies of the state by the US authorities.

When asked if the CIA had broken into WikiLeaks’ associates’ homes and stolen or wiped their hard drives, a former intelligence official declined to go into detail but admitted that “some actions were taken”.

The rest of the story is well known to our readers. On 11 April 2019, British police raided the Ecuadorian embassy in London and dragged Julian Assange into a waiting van. In a shocking breach of all established international protocol (a breach that may well have unforeseen consequences), a government had allowed a foreign law enforcement agency to enter its sovereign territory to arrest one of its citizens.

Mr Assange has been in custody ever since. Having won round one against extradition to the USA on a technicality, the battle for his life goes on.

This is a case that should concern everyone who believes that working people have a right to know what is being done by their rulers and why. Julian Assange has been incarcerated for the best part of a decade for no other reason than that he (unlike the vast majority of those who call themselves journalists in the western world) was doing real journalism: reporting on facts and exposing crimes, no matter how rich or powerful the perpetrators and with no thought to the consequences for himself.

There is a very good reason that Julian’s case gets so little and such distorted coverage in the corporate media. Our rulers know well the power of such a story to fuel the just outrage of the masses.

Now that more publicity has been brought to bear on his persecutors’ nefarious actions and motivations, there is a small chance that self-preservation will motivate the US and British authorities to quietly let the matter drop and to cease their persecution of Julian Assange.

Whatever happens, the signal service he has done in helping to expose the true nature of imperialism will not be forgotten.

Nor will the lesson than one man, even a very clever and determined one, cannot overthrow the system by himself. Only organised collective action on the part of the working class will bring an end to the iniquities of imperialism.