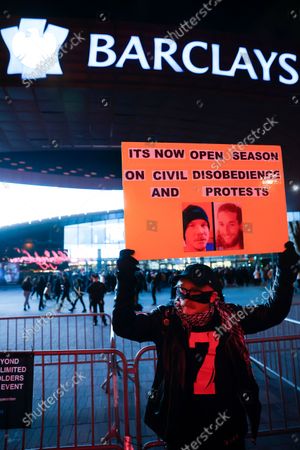 Workers World expressed outrage — along with the rest of the country and the world — over the devastating Nov. 19 acquittal of 18-year-old white vigilante Kyle Rittenhouse for the murder of two anti-racists, 36-year-old Joseph Rosenbaum and 26-year-old Anthony Huber, and the wounding of a third, Gaige Grosskreutz. These killings occurred during an Aug. 25, 2020, protest against the police shooting two days earlier of a 27-year-old Black man, Jacob Blake, in Kenosha, Wisconsin. Blake had been shot seven times in the back and remains paralyzed from the waist down. None of the police officers involved has been charged in the shooting.

On Aug. 26, 2020, reacting to the shooting of Blake and the murders by Rittenhouse, along with all the protests ignited by the public lynching of George Floyd in Minneapolis in May, six teams in the National Basketball Association playoffs carried out an unprecedented and historic wildcat strike. It caught the NBA hierarchy and their billionaire bosses completely off guard.

This strike began when the Milwaukee Bucks refused to come onto the court for a scheduled game against the Orlando Magic. Besides the Magic, other teams — the Los Angeles Lakers, Portland Trailblazers, Houston Rockets and Oklahoma Thunder — showed solidarity with the Bucks by not playing as well.

These teams, along with others eligible for 2020 playoffs, had been playing in a contained environment — a bubble — separated from their families in Orlando, Florida, aimed at preventing the spread of the COVID-19 virus.

Six Women’s NBA teams refused to play their regular season games on Aug. 26, many of the players wearing Jacob Blake warm-up shirts with seven bullet holes drawn on the back, symbolizing how many times he had been shot.

When the Rittenhouse verdict was announced Nov. 20, NBA and National Football League players expressed anger, disappointment and dismay on Twitter. Karl-Anthony Towns said that the “system is broken.” Trae Young, Darius Leonard and Robert Griffin III compared the acquittal of Rittenhouse with the case of Julius Jones, a Black man who faced execution in Oklahoma on Nov. 18 before being granted clemency.

Griffin III wrote, “Kyle Rittenhouse can kill without a sliver of doubt and walk free, but Julius Jones is in jail for life without the chance for parole, after being on death row for 20 years with all types of doubt in his case. What is Justice? God help us.”

The sham trial was tainted from the very beginning. During a pre-trial hearing, Judge Bruce Schroeder stated that the three men Rittenhouse shot could not be characterized as “victims” or “alleged victims” — but it was okay to demonize them as “arsonists,” “looters” and “rioters.” These instructions reflect the biased view that Rittenhouse feared for his life when he committed homicide and intentional homicide.

Rittenhouse traveled from Illinois, openly carrying an AR-15 rifle, in order to terrorize the multinational anti-police brutality protest. The Kenosha police were caught on video before the shootings, thanking Rittenhouse and other vigilantes for their presence and providing them with water. The police allowed Rittenhouse to continue to brandish his weapon, minutes after the shootings before the teenager voluntarily turned himself in to the authorities.

The all-white jury deliberated for over three days on whether Rittenhouse exercised the right to self-defense. During his testimony, Rittenhouse cried crocodile tears saying that he was armed as his civic duty to defend life and property against the protesters. Rittenhouse, like Dylann Roof who slaughtered nine Black churchgoers in Charleston, South Carolina, in 2015, was not a lone terrorist. Just like the Ku Klux Klan and neo-Nazis, Rittenhouse and his ilk are an extralegal arm of the repressive state, i.e. the cops and prisons, inherent within the capitalist system.

As Sam Marcy stated in his 1983 book, “The Klan & the Government: Foes or Allies?”: “If the growth of the KKK and the Nazis were an isolated phenomenon divorced from the degenerative effects of monopoly capitalism, if these groups had no ties to and were not . . . promoted by formidable sections of the ruling class, they would be merely a sterile and stagnant combination of racist thugs. But that is not the case.”

This is why the Kenosha police encouraged Rittenhouse to carry out murder of those supporting Black lives. This is why the Black Panther Party was targeted for extermination by the FBI’s COINTELPRO and local police — because they defiantly defended their right to bear arms against racist state repression. This is why the survivor of the Kenosha shooting, Gaige Grosskreutz, stated in his lawsuit that he had the right to carry a gun to protect himself from right-wing thugs like Rittenhouse.

The truth is that Rosenbaum and Huber gave their lives in solidarity with the Black Lives Matter protest. In fact, Huber’s mother, Karen Bloom, called her son a hero, and millions more agree with this sentiment.

This trial and its outcome was not about one individual vigilante; it was an indictment of the entire rotten (in)justice system. It is a blatant attack on the heroic Black Lives Matter struggle versus white supremacy, in the forms of domestic terrorism, the police, the courts and the judges. This acquittal is an effort to instill fear and intimidation throughout a movement that has brought millions into the streets to demand an end to systemic racism, especially in the aftermath of the publicized lynching of George Floyd.

The acquittal of Rittenhouse is a stark reminder of the racist and fascistic war on Black and other oppressed peoples and their allies.

President Joe Biden apologized for the verdict, insisting that “the jury system works, and the verdict had to be abided by.” (cnn.com, Nov. 19) Colin Kaepernick said it all Nov. 19 on Twitter: “We just witnessed a system built on white supremacy validate the terroristic acts of a white supremacist. This only further validates the need to abolish our current system. White supremacy cannot be reformed.”

The only answer to the atrocities that took place against Jacob Blake, George Floyd, Armaud Abery, Breonna Taylor, Anthony Huber, Joseph Rosenbaum and Gaige Grosskreutz, and countless other victims and survivors, is to stay and grow in the streets. Our demands must be to not only abolish the police, the courts and white supremacy but to abolish their breeding ground — the entire rotten capitalist system.