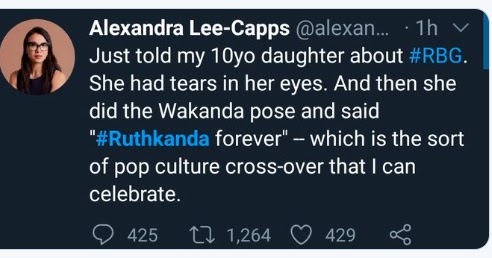 It’s a testament to the imagination of a certain swathe of liberals that imagine themselves “leftwing” that Ruth Bader Ginsburg’s death has resulted in performative mourning and lamentations that seek to depict her as some kind of anti-fascist hero. In the midst of large-scale uprisings in response to the state violence against black lives––rebellions met by the same state violence––the partisans of Ruth Bader Ginsburg (now “immortalized” as RBG as if she is on the level of MLK) want a Supreme Court justice as a hero. A cop-loving, self-proclaimed American patriot, whose only accomplishments have been in defending a certain class of white women––and even then she was a mediocre yankee politician. In a time when a large number of grass roots organizers are putting themselves at risk, when many of them have been incarcerated and murdered, the RBG partisans want to apotheosize a legal representative of the liberal wing of settler-capitalism merely because she disliked Trump.

Nearly a decade ago I wrote a somewhat controversial obituary about Jack Layton (late leader of the NDP), pointing out the strange performativity of mourning amongst sections of the anti-capitalist left which should have known better than to commemorate someone who was responsible for the NDP’s rightward drift. The predictable outraged responses focused on the post’s audacity to “speak ill of the dead.” Predictable because I had already anticipated them in the post itself, and yet still they were delivered so as to conjure away the politics behind the “irreverant” post. Since I’m sure there will be similar responses to this post, I’m going to repeat––right out of the proverbial gate––what I wrote in that post about the politics of mourning: “The point is not that a human being’s life isn’t worth mourning but, rather, why some of us seem to care about mourning the life of another capitalist pig when we don’t mourn the deaths of other people we don’t know personally.” I’m sure Ginsburg’s family has a reason to mourn her passing, but so does the family of everyone who dies; if the argument is she should be mourned because of some vague humanist injunction that “all lives are precious” then, by the same token, go out and mourn the deaths of other reactionaries––mourn Trump when he’s dead as well––and be logically consistent. The point, here, is that the mourning is politically performative; we are being told that this politician needs to be mourned because she was politically meaningful when she was not.

In the lead up to the US election this performative mourning thus serves an important function for electoral dogmatism. The ideological notion is that Ginsburg stood in the way of “Trumpism” in the Supreme Court and, without her, Biden’s election has become precarious. Which of course feeds into the discourse that fascism can be averted by voting for another vicious capitalist man who is only slightly less vicious than the one who is currently elected, and that there is something worth preserving in the genocidal project called “America”. Again: this is a testament to the American liberal “left” imagination. In the serialized On Necrocapitalism project that has been going since the early days of pandemic, the author(s) wrote in the first chapter: “a particular capitalist imaginary results from [its] end of history narrative and this imaginary leads to a closure of thought.” The performative mourning and lamentations of Ginsburg’s passing feed this closure of thought since they demand anyone half-wise radical should care about someone who, in point of fact, lived a life in opposition to anything smacking of anti-capitalism and was, in point of fact, an enemy of the oppressed and exploited masses. Indeed, a very good friend of mine messaged me her antipathy of this Ginsburg performative mourning with three words: “Lack of imagination.”

Because, let’s be clear, Ginsburg gave nothing to the exploited and oppressed masses of the nation-state she loved as a patriot because she loved it as a patriot. She was quite comfortable opposing Indigenous sovereignty, and she was so comfortable in her US patriotism that she was offended by the symbolism of professional athletes taking the knee. These are only two examples of her long record as a defender of US settler-capitalism. Indeed, she was a defender of US settler-capitalism and thus a defender of the foundations of the system that always generates fascism as a logical expression of its fundamental white nationalism. So she didn’t like Trump? That merely charts a personal preference, a differential between the ideological wings of the ruling class. Because when it came down to supporting the exploited and oppressed masses she always proved herself to be the enemy.

Ginsburg was, for her entire life, a class enemy. She represented one wing of the ruling class, and that’s about it, but she did nothing for the victims of US capitalism. In fact, she supported their exploitation, oppression, and incarceration. Let’s repeat it again: she was a class enemy.

So, at the end of the day, the only people who should performatively mourn Ginsburg are the people with the same politics: the liberal US patriots who are only opposed to Trump because it offends their understanding of neoliberal settler-capitalism. They’re already creating cringe-worthy and corny social media posts (#Ruthkanda), so let them mourn Ginsburg as a spectre of their backwards understanding of politics. For those of us who demand more––for us communists and anti-capitalists––Ginsburg’s passing is just a passing of another shitty capitalist apparatchik. Good riddance.