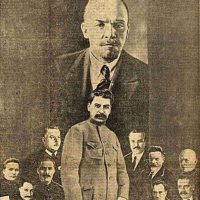 “…the best paid historiography is that which is best falsified for the purposes of the bourgeoisie.”
(Engels, Notes for the “History of Ireland”)

Communists are constantly under a barrage of psychological warfare from the capitalists and their henchmen. On any given historical topic there are countless books about the supposed crimes and atrocities committed by communists. While those books are often lazily researched, have bad evidence or no evidence at all, or can even be deliberately lying, they carry out their purpose. Their purpose is, that when ever someone wants to learn about a given topic related to communism, he is told “the communists are bad”. The sheer amount of anti-communist books on every possible topic, can slowly start to work on even an intelligent and devoted communist.

When one reads book after book, of more and more horrors supposedly caused by communism, it will unavoidable cause the communists to become discouraged, depressed – at least temporarily. The communist might almost start to believe the lies which all these dozens and dozens, thousands and tens of thousands of anti-communist books spread. Then, after hours and hours of research, the communist might find something which reveals the truth about communism, debunks the capitalist lies. For a moment, he is satisfied and comfortable. But the anti-communist psychological bombartment continues relentlessly.

Is it any wonder that so many workers hold anti-communist views? No. Withstanding the anti-communist propaganda bombartment can be extremely difficult, and for a person who hasn’t already learned the truth about marxism it is even more difficult. I grew up being taught to fear communism. And I really did fear it. Even after learning about marxism, it took several years to finally get rid of most of that fear, which was instilled deep inside my psyche, by years of indoctrination. Even after becoming a marxist, I still emotionally and irrationally feared communism. I knew it was the result of lies, but that didn’t make it go away.

Maybe for some other people it was easier, but for me it wasn’t easy. Only very gradually, after discovering more and more, and becoming slowly more and more convinced of the truth of communism, I finally was able to discard that fear.

Researching the history of socialism in Hungary has reminded me of all these things, because I read dozens of books, maybe 30 or 40 about the topic, and the vast majority of them were absolutely virulently anti-communist.

My plan for researching the history of socialism in Hungary was simple:
1) find some books discussing it from a marxist point of view.
2) find maybe two or three non-marxist books on the subject which would be somewhat objective, as neutral as possible, and have lots of sources and evidence.

The first goal was actually very easy. I found some marxist books about Hungary. The second goal proved to be impossible. I didn’t find even a single good history book about Hungary written by a non-communist. Even the best ones, like “Hungary: A Short History” by Norman Stone and “Revolution in Hungary” by Paul E. Zinner were terrible. Some chapters by Stone would have only a small number of sources, and it had insane and unproven slanders against communism all the time. Zinner’s book had more sources, but it was equally dishonest, untrustworthy and often times blatantly lying or badly researched. The other books which I read, were all much worse. Some of them had zero sources, or less then five sources in the whole book, it was common. They all made the same unfounded assertions about important events in Hungarian history.

I could read those books, and always get the same answers, and everytime it was without any good evidence, without citations, or citing one of those terrible books which I had already read, which itself had no evidence or cited yet another terrible book with no evidence. Eventually after hours of research, I could discover the original source for some baseless claim, and it was proved to be lies. But what if I wanted to find out the truth, and not merely discover what was lies? It was extremely difficult, because those books often times contained barely any truth. Even a basic summary of Hungarian history was often distorted almost beyond recognition.

But it began to take its toll. There were times when it made me sad. I read atrocity-story after atrocity-story. “Communist dictators”, “communist murderers”, “bloodthirsty communist tyrants”, “economic disaster caused by communism”, “destruction of culture by communism”. I knew it was lies, but it still made me unhappy to have to read it constantly, book after book. And only occasionally, I would get a small glimpse of truth, some new fact which I could verify and add to my pile of knowledge. I stayed motivated, and sometimes the little discoveries that I made were rewarding.

History is just as partisan as any science. History has a class character like everything. Capitalist society is ruled by capitalist ideology. Those truths were always in my arsenal. But it might be easy to forget those things. One might simply fall into the comfortable fantasy that the historians – taught in capitalist schools, taught by virulent anti-communists, taught based on anti-communist books, restricted by the capitalist academia which decides what gets published and what doesn’t – that those historians, really were telling the simple and “neutral” facts. Life would be so easy then, so comforting. One wouldn’t need to rack one’s brain. Could simply believe the professors, could simply believe the “salesmen” of anti-communism as Lenin said. One might simply fall into that comfortable dream… of class collaboration.

But instead, we have to awaken to the frightening, and unpleasant wakefulness, where the henchmen of the capitalists are always merely serving their class interest, where we can never believe in some “simple” and “neutral” truth, but have to always analyze everything for ourselves, through a firmly proletarian and marxist viewpoint, never lapsing into the fantasy of “neutrality”, but always keeping a proletarian partisan viewpoint. And at every step, the capitalist propagandists try to hinder us, they hide the facts, they spread lies, they falsify, distort, they use fear-propaganda and drive it into our heads daily and for all our lives. And many of them even believe many of their own lies.

When I read a historian or a journalist, and I discover that they are telling lies, deliberately, maliciously, to protect exploitation, to oppress the hard working everyday people of the world, it almost always makes me at least a little unhappy. When I read a historian who uses very colorful well crafted language to describe a situation, his text captures my imagination, I go with the flow of his text, almost beginning to believe him, and then something alerts me, stirs me from the enjoyable activity of reading a well crafted narrative. I stop. I consider. He has written something which cannot be right… or something very biased… I check to see… There is no citation… or the citation is one of the familiar hacks and liars. Another disappointement. More malicious lies! I’m not surprised but I am unhappy.

There is an optimism which comes with marxism, but there is also a sadness. A sadness about the state of the world, and the capitalists use this ruthlessly against us. They want a sad, apathetic mass of people without hope.

We can live in the fantasy-land where the capitalist professors are simply “neutral” and always reliable. It would be easier. No critical thinking is required. Just play video games, drink alcohol, distract yourself. In that kind of life, we are safely kept away from communism by fear and ignorance. “Communism doesn’t work”, “Communism leads to millions of deaths”. Better to stay away from it!
As long as one doesn’t care about the truth, as long as one isn’t too curious! And there are so many products to help take our mind off things…

Stalin said that revisionists are those, who surrender under the pressure of capitalism and capitalist ideology. (Stalin, The Right Deviation in the C.P.S.U.(B.)) A revisionist believes in their heart that it is too hard to fight the capitalists, to resist them. It is easier to capitulate, compromise with them. This is why so many people who consider themselves progressives or even communists, adopt revisionist ideas and believe lies about communism. They are under a constant shower of anti-communist propaganda, it takes determination and hard work to resist it – but we must resist it, we have no choice, the masses, humanity itself, has no other choice.

Lenin said: “a revolution that is more difficult, more tangible, more radical and more decisive than the overthrow of the bourgeoisie,… is a victory… over the habits left as a heritage to the worker and peasant by accursed capitalism.” (Lenin, A Great Beginning)

Should we be surprised about the revisionists and opportunist waverers, the compromisers and those who consider themselves honest and good people, and even progressives, who still parrot anti-communist lies? They collapse into the bourgeois swamp under the weight of all the propaganda, all the conservative attitudes, prejudices and ingrained beliefs which have been drilled into our heads for generations.

Instead of the difficult but correct road of class consciousness it is easy to step into the broad and massive marsh of spontaneity and capitalist ideology, which surrounds us from all sides:
“We are marching in a compact group along a precipitous and difficult path, firmly holding each other by the hand. We are surrounded on all sides by enemies, and we have to advance almost constantly under their fire. We have combined, by a freely adopted decision, for the purpose of fighting the enemy, and not of retreating into the neighbouring marsh, the inhabitants of which, from the very outset, have reproached us with having… chosen the path of struggle instead of the path of conciliation. And now some among us begin to cry out: Let us go into the marsh!… Oh, yes, gentlemen! You are free not only to invite us, but to go yourselves wherever you will, even into the marsh. In fact, we think that the marsh is your proper place… Only let go of our hand… for we too are “free” to go where we please, free to fight not only against the marsh, but also against those who are turning towards the marsh!”
(Lenin, What is to be done?)

To surrender under pressure from capitalist ideology, to collapse under the weight of capitalist ideas, prejudices and traditions, to become discouraged and pessimistic, to sink into the marsh of spontaneous capitalist trends and beliefs, or even to become a happy and brainless believer in the lies of the capitalist professors, a blissfully ignorant person. Those are all dangers for any worker, for any communist.

But capitalism has no future, and it has no truth, only ignorance, lies and decay, poverty, misery and war, death of culture, stagnation of philosophy, and science being turned against the people.

So let’s keep fighting for a better world for the workers, for humanity itself. Despite all the difficulties the future is ours’. Marx wasn’t wrong when he said “workers have nothing to lose but their chains”, he wasn’t wrong at all. More often then not, those chains are not only physical but intellectual and mental too: chains of lies, chains of ignorance, chains of fear. The truth is that we don’t have anything to lose, only a world to win!

Engels, Notes for the “History of Ireland”
https://www.marxists.org/archive/marx/works/1870/history-ireland/notes.htm

Lenin, What Is To Be Done?
https://www.marxists.org/archive/lenin/works/1901/witbd/