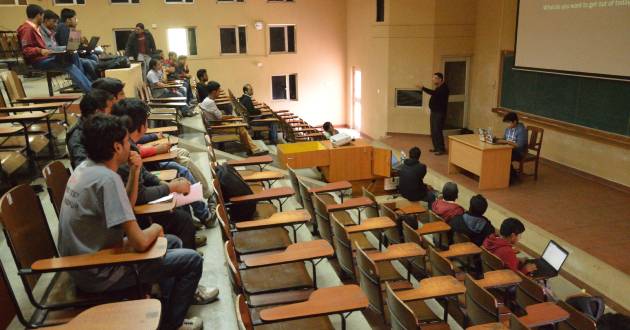 In May 2021, Gilbert Sebastian learnt of this suspension from his post as assistant professor in political science at the Central University of Kerala in South India. An official of the university administration informed him that comments he had allegedly made during an online class on ‘Fascism and Nazism’ had led to this pass. During the session, Sebastian had asked students to discuss whether the Rashtriya Swayamsevak Sangh (RSS), the ideological parent organization of the ruling BJP party, is proto-fascist – a political movement leaning towards fascism.

Apparently, a complaint had been filed by a bureaucrat from the National Monitoring Committee on Education in a letter to the University’s Vice Chancellor, which alleged that Sebastian had been ‘indoctrinating students by spewing hatred and poison against the Narendra Modi government’.

How the bureaucrat at a national education agency became privy to the contents of Sebastian’s postgraduate online class and why they intervened in a matter that ought to be autonomously handled within the university or even the faculty or department concerned, are not outlined in the letter of complaint. The dots are, however, not difficult to connect. A poster circulating on social media and on campus at the time featured a drawing of a teacher with a gigantic syringe injecting ‘anti-nationalism’ into innocent, patriotic students.

Lying on a table behind him was a book bearing the title ‘Maoist’ – a catch-all term with which India’s rightwingers brand progressives as potentially dangerous and violent. The poster, which bore the logo of the student association ABVP (Akhil Bharatiya Vidyarthi Parishad), a student wing of the RSS, made it clear that the complaint involved their co-operation and participation. Rightwing channels on YouTube shared videos praising the students who stood up in defence of the nation and succeeded in having the ‘anti-national’ lecturer suspended. Well-funded and efficiently organized political and ideological networks now firmly connect student groups and faculty representatives to the paramilitary ‘voluntary social services’ of the RSS and state-level and national educational bodies.

For Sebastian, who has been lecturing at the University for over five years, and has served nearly four as the General Secretary and Acting Secretary of one of its two teachers’ unions, the suspension, though shocking, was not a surprise. The heavy-handed actions of the university administration were further evidence of the fraying of the fabric of academic life through the increasing prominence and presence of Hindutva, termed by scholars as ‘a powerful, vocal and insidious form of Hinduism’, which masks its political stakes through claims to being spiritually rooted in ancient Indian heritage and belief systems. He is not new to such targeted attacks on academic freedom. He was reprimanded by university administrators in 2015 and penalized with the withholding of two salary increments for being vocal in his condemnation of the politically motivated dismissal of another faculty member.

Sebastian’s suspension in May 2021 led to an outpouring of media condemnation. A month later it was revoked, but with a warning letter, asking him not to ‘repeat such digressed utterances, which may cause disharmony in the classroom’. The warning was formalized a few months later in a paranoid memo issued to all employees of the university, calling upon them to ‘abstain from giving any type of provocative lectures/statements that are anti-national and will be against the interest of the nation. Strict disciplinary action will be taken against those who indulge in such activities in future.’ While student and teacher unions across the country have criticized the bureaucratic abuse of codes of conduct at universities to undermine their academic freedom, these protests seem to not have deterred universities and the Ministry of Education from pursuing their hardline approach towards cracking down on critics.

What Gilbert Sebastian went through is unfortunately no longer exceptional at educational institutions in India. It is no coincidence that the targets of such attacks are often people from oppressed caste backgrounds or minority religious communities, often employees at less-privileged, rural universities. This doesn’t necessarily mean that critical upper-caste academics or public intellectuals are spared, though they inevitably receive far more national and international support.

Eminent retired employees of universities are harassed with arbitrary withdrawals of their pension dues, with legal notices and requirements to submit academic credentials to avail of emeritus positions. Lectures on topics that challenge the ruling party line are regularly cancelled or not allowed to take place. Red tape and growing surveillance mechanisms are making it extremely difficult for scholars to participate in or organize research events. Bodies mandated to provide educational quality control interfere in curricular decisions and remove or reassign texts on grounds of their promoting a ‘negative’ impression of the country. Political stooges with no academic credentials are appointed as university administrative heads, and are emboldened in their policing role as overseers of the state.

There is an alarming international dimension to all of this. In early 2021, following the burst of online exchanges that were the unexpected pleasant side-effect of lockdowns around the world, the Ministry of Higher Education issued a memorandum that reads as an act of desperation. It required all Indian scholars and institutions to first obtain approval from the Ministry of External Affairs if they want to convene any online or virtual international conferences or seminars, on any topic related to what the current establishment likes to call ‘India’s internal matters’, which could be anything from agriculture to ancient history. The order, which was later revoked, nevertheless served the purpose of intimidating universities and academics.

The BJP-supported ABVP student organization has been steadily gaining traction on India’s public university campuses. They have been successful in pressuring the administration to cancel any film screenings or reading groups that are deemed as critical of the state. They regularly mobilize student members to call out faculty who supposedly malign the reputation of the country. They have even received police protection despite a track record of vandalism and vigilantism, which includes beating up and threatening students during student body elections.

The increasing social acceptability of the preposterous notion of ‘anti-national’ education is perhaps the most disturbing development of all. While the mainstream media in India widely presents cases such as that of Gilbert Sebastian as examples of the academy being taken over by ‘Maoist’ or ultra-left views that purportedly aim to destabilize the country, it is becoming more and more difficult to openly interrogate what it actually means to be ‘anti-national’.

For it is in the name of protecting national pride and heritage that textbooks and curricula are changed at will. It is the spectre of anti-nationalism that serves as a dog whistle to mobilize majoritarian political sentiment and silence dissent. It remains the task of all those committed to academic freedom to challenge the legitimization and institutional protection of such terms, to reveal their deeply anti-intellectual and chauvinistic foundations, and to defend those who are accused of being anti-national.

Sruti Bala is a member of the collective International Solidarity for Academic Freedom in India (InSAF India).

With special thanks to Isha Savani and Lotika Singha for additional research input.

A spectre is haunting universities – Join the Marxist Student Federation!

The Euros and the exacerbation of nationalism

The Poison of Nationalism