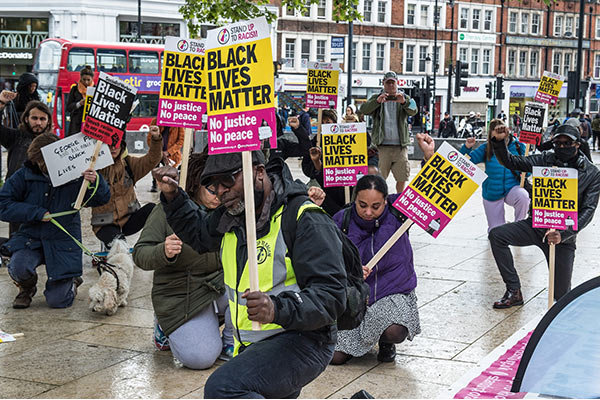 Anti-racists will debate how to take forward the fight against racism, the far right and fascism at an international conference on 16 and 17 October.

The Stand Up To Racism (SUTR) online conference comes amid Tory “culture wars”, attacks on refugees and migrants, and a power grab by racist cops.

Weyman Bennett, SUTR co-convenor, told Socialist Worker the Tories’ culture wars mean the left have to be united in the fight against racism. “Boris Johnson is using the demonisation of migrants to ramp up racism,” he explained.

“This is to increase the politics of divide and rule and to suffocate the Black Lives Matter movement.

“It means we have to show in body and mind our willingness to fight Johnson and his class. That’s why uniting our class to welcome every refugee and destroy every fascist organisation, as well as debating and discussing how to do this, is vital.”

The Tories use racism to distract from all the chaos they cause. They scapegoat migrants to deflect from the murderous handling of the pandemic to poor wages for millions of workers and the lack of affordable housing.

This offensive against refugees has culminated in home secretary Priti Patel’s new Nationality and Borders Bill whihc is currently going through parliament.

The law will criminalise migrants who travel to Britain via “illegal” means. But undocumented migrants don’t have the luxury of plane tickets and passports while fleeing war-torn countries or persecution.

“We also have to tackle the ideological assault,” Weyman said. “It’s no accident that in the deepest of crises that the right is referring back to the same racist rhetoric—it’s tactics of divide and rule.

“It’s important we have a united front.”

The conference will also hear from a range of trade unionists.

With the Tories on the attack, taking on racism is vital for every trade unionist.

Crucially, the international conference will hear from speakers fighting anti-racism and the far right worldwide.

This includes Marwan Muhammad from the Collective Against Islamophobia in France and Petros Constantinou from the Greek anti-fascist Keerfa group and Brazil’s former minister for racial equality Martvs Chagas.

Sessions include World against racism and fascism, No hostile environment—uniting against the Nationality and Border Bill, and Black Lives Matter—racist policing and the fight for justice.

Others will focus on fighting for anti-racist workplaces, the rise of Islamophobia 20 years on from 9/11 and opposing the Tories’ draconian police bill.

SUTR’s conference is important to organise a fight back in Britain— as well as coordinate internationally with anti-racists.